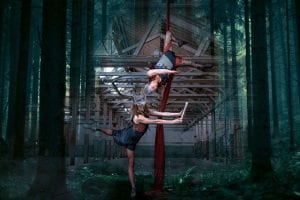 Immersive theater is having a moment. I attended a “summit” on immersives just last week. I actually had no idea what “immersives” were and just went because I was invited by someone who thought I should be there. The MC of the event informed the audience that the genre is defined by the audience being an active and interactive part of the theater experience. It’s a broad genre that includes everything from dinner detective shows to escape rooms to live action role-playing games (LARPing). Turns out I’ve been writing about immersives for months and didn’t even know it.  I intend to keep writing about them because I just saw the preview for another one and it looks freakin’ awesome.

You all know that I have a serious case of circus envy and a lot of stage crushes on circus-y people. Some of my favorites are joining forces to create an immersive experience in a derelict warehouse in RiNo. It’s called Zabiti, and they’re doing something amazing.

First off, although it has nothing to do with the immersive experience, I want to talk about their mobile unit.  The Rainbow Militia troupe members have welded together a modern-day traveling circus wagon that includes a stage set and a crane-like aerial-rigging extension protruding from the top. They haul this vehicle around to neighborhoods and bring the art and athletics of circus to folks who might never get the chance to buy a ticket or see the performing arts in person. How cool is that?! 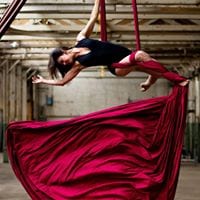 Second, I want to talk about the immersive that’s coming up at the end of August and in the first half of September. It’s based on Russian folk tales and takes place on the ground and in the air inside the old Denver Rock Drill, which used to be just that—a heavy-industry plant. It’s slated to be redeveloped into a multi-use-zoned structure, which, although it’s intended that it will keep much of its original profile and accoutrements, is so damn cool as an underground venue that I’m a bit sad to see it changed at all.

Members of the Circus Foundry and the Rainbow Militia, along with a number of local artists and artisans, have built life-size, interactive sets including a ten-foot tulip and a phoenix-shaped witch’s house that reaches the rafters. Other areas are minimalist implications of what your imagination fills in to be complete scenes. Each section has its own charm, including the bar, where you can order a beer from a man-owl in a man-sized birdcage.

The story begins outdoors in the courtyard, with the narrator informing the audience of the story: something terrible has happened, a curse has fallen upon the forest, and we, the audience, need to witness and assist the characters as they try to restore the forest to rightness. Then we are ushered into the space to watch and help the story unfold. 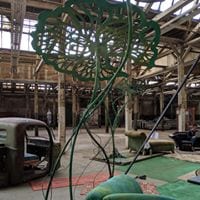 The cast uses a broad scope of circus skills to tell the story; aerial rigs hang throughout the space, dancers zip around, acrobats do back flips over the concrete floors, live music serenades the performance, and the narrator himself speaks from a cherry-picker suspended above the heads of the crowd. It’s a wonderful use of all planes of the geometry of a space. I also want to call out the costuming. In correlation to the built sets, which vary between elaborate and detailed and spare and suggestive, the costumes are a mix of minimalist and gorgeous. The masks that some characters wear, in particular, are brilliantly detailed and practically alive. I love masks; these are truly lovely examples.  The performers also wear a variety of costumes that harken to Victorian military coats and bouncing burlesque outfits. The contrast between these two attitudes is quite charming. 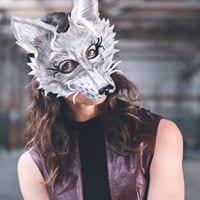 So, I’ve said a lot of really positive things so far, all of which are true and emphatic, but I would be amiss to ignore any flaws. Disclaimer: the production experience that I attended was a viewing for the press and was still in development, so take that into consideration. I didn’t really understand all of the story. I understood that there was a curse, and something needed to happen…but what that thing *was* wasn’t totally clear from the set-up. There was also some muddiness around which character was playing on which team and why the teams were in opposition to each other at all. The cast was still actively developing the performance during the sneak-peek for the press, and so it’s possible that some of these points will be resolved by the time the public sees it. There’s also a brief mention to be made that the circus performers sometimes come across as acrobats and athletes before actors; some parts of their performance shine brighter than others.

I won’t spoil the show by describing the high point of the show for me, except to say that in involves the first NERF-ball-snowball-fight that I’ve had since I was a kid and I enjoyed it immensely and immersively. If you want to unpack your inner kid, you can, too! Zabiti runs this immersive experience through the first week of September. I’d get tickets as soon as possible—not only is this immersive experience worth taking in, the Rock Drill is going to be developed in 2020 and this is the last event series that will run there before they install office space and a cafeteria. If I had my druthers, the leaded glass panes would spend many more years looking down on independent art productions. Alas.

Jessie Hanson
Jessie Hanson lives and works in Denver and couldn't be happier about it. Like the best-possible kind of Jekyl-and-Hyde scenario, she splits her life between science and storytelling. During the day, she performs clinical diagnostics and messes around with test tubes. At night, she performs behind the mic as a standup comedienne, in the air as a circus aerialist, and in rhinestones as burlesque dancer. She begrudges the hyper-inflated cost of a decent pair of false eyelashes. When she's not on stage, she sweating it out as an endurance athlete in triathlons and marathons across the West. She begrudges the hyper-inflated cost of a decent pair of running shoes. She's thrilled to be on board with OnDenver and writing about science, comedy, circus, athletics, and general fun on the Front Range!
Tagged: Audience ParticipationCircusImmersiverinowarehouse