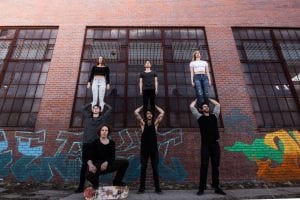 “Sonder, noun: (1) the sudden and profound realization that each random passerby is living a life as vivid and complex as your own (2) a new production by the Circus Foundry”

Sigmund Freud diagnosed all women as having penis envy. I would disagree with this, but I do confess to having a serious case of circus envy. I wish I were super good at the circus arts. I wish I could toss my body around on every aerial apparatus like a ragdoll. I wish I could juggle dozens of oddly-shaped objects with grace and alacrity. I’d love to bend myself like Gumby into pretzel formations. But I don’t. I just hang around the metaphorical (sometimes literal) stage doors and try valiantly not to slobber my fandom on those who *can* do these things.

A lot of people who *can* do cool things hang around in a group called the Circus Foundry. Run by Bethel Lindsley and Anthony Cummings, it features modern circus feats, largely acrobatics and aerial arts, but some juggling and prop work, too. They’re based in Boulder (as so many circus people are), but were running a production at the Cleo Parker Robinson Dance center, near what we locals call the Unsafeway on 20th Street in Denver (although the grocery is actually a perfectly fine establishment—the old nickname is a bit of a misnomer). I showed up with my circus-watching buddy because of course I did—this is the stuff I love watching and fantasizing about doing. Some people watch porn and wish they were participating; I watch circuses and wish the same. 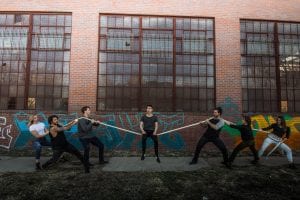 The CPRD venue is a lovely old historically African-American church building converted into a performance venue. There are a couple hundred seats in the main auditorium and a couple dozen patrons were seated in them. It’s hard to create energy in a non-full room, and I wondered briefly how the cast would manage it.

The troupe picked the name “Sonder” deliberately. The opening sequence was a tribute to the singularity of our individual lives, each separate and unexpected, even as we are all part of the crowd in the street. The cast in their distinct costumes wandered across the stage, demonstrating an introduction of their performance skills as they interacted with each other. Then the music changed, and the separate montages of skills and play began. 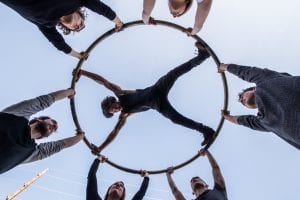 Here’s the point where Sonder varied from most of what I’ll call “neo-circus” performance. Circus has its roots in ancient traditions of entertainment going back thousands of years, and the definition of what is “circus” has varied over time. It has always included physical feats of skill and derring-do, and in years past it included a lot of animal acts (it still does, in some areas of the world). In recent decades, circus as a genre has moved almost exclusively to human acrobatics—think Cirque du Soleil—which is all people and no non-human animals. What I’m calling “neo-circus” relies on human aerialists, acrobats, and contortionists; along with “prop-work” artists such as jugglers and practitioners of legerdemain. Really…you mostly get aerialists and jugglers. Sonder demonstrated a wider variety of skills than I usually see in a circus production, and some that I’ve never seen included.

For instance, I’ve never seen a skateboard as a circus prop. And yet there it was. And used quite effectively, I might add, in a clown act by Jonas Whalen. I also enjoyed seeing some more-traditional circus props like juggling ring, circus hoops, and a Cyr wheel used in comparative functions. It was a nice, 3-beat structure to a performance sequence. There were also a lot of balls in this production. (If not penis envy, could I be diagnosed with ball envy?) I’ve never seen circus performers use “fitness balls,” the kind you do ab-crunches with at the gym, to tumble, roll, and swap their bodies’ positions around on stage. It was pretty cool.

Apropos of nothing else, I’m going to make a remark here that Lennon Shannon’s chest tattoo might be the sexiest thing I’ve seen in 2019. Worth the ticket price, right there. His acrobatics were noteworthy, too, but my biggest marking in my notebook was, “chest tattoo 😛 :-P” so I was clearly a bit otherwise distracted. 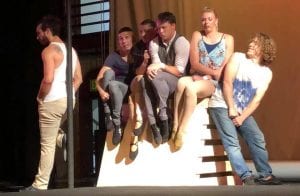 While speaking of the charms of the individual performers, I’ll also call out that Andrew Hill gave an exceptionally charming performance on corde lisse. The athleticism and gracefulness of the sequence was stunning to watch and Hill’s artless, enormous smile at the end was delightful. It was clearly the expression of an artist-athlete who nailed the performance and knew it. Pure fun to watch.

Going back to the idea that a non-packed house can be a tricky energy to build…I needn’t have worried. The group numbers were really the strongest game for this troupe. They had several acrobatic and tumbling sequences that made me wish (again!) that I had skills. The climax was the Chinese pole. I have certainly not seen *every* circus trick in the book, but I have never before seen a certain “leapfrogging” trick that these folks performed. And Bryan Connolly closed the show with an enormous drop off the pole that made my friend and I turn to each other and say, eyes wide, “That was a BIG drop.”

All in all, this show was a delight. If you didn’t happen to catch them at the CPRD center, you have another chance! They’re appearing at the Dairy Arts Center on July 20 & 21.

Jessie Hanson
Jessie Hanson lives and works in Denver and couldn't be happier about it. Like the best-possible kind of Jekyl-and-Hyde scenario, she splits her life between science and storytelling. During the day, she performs clinical diagnostics and messes around with test tubes. At night, she performs behind the mic as a standup comedienne, in the air as a circus aerialist, and in rhinestones as burlesque dancer. She begrudges the hyper-inflated cost of a decent pair of false eyelashes. When she's not on stage, she sweating it out as an endurance athlete in triathlons and marathons across the West. She begrudges the hyper-inflated cost of a decent pair of running shoes. She's thrilled to be on board with OnDenver and writing about science, comedy, circus, athletics, and general fun on the Front Range!
Tagged: acrobaticsaerialistboulderCircusdancejuggling