I confess that I do not care for computer-generated special effects.  Sure, they’re spectacular to look at (see: ninety percent of the last Star Wars). The tremendous skill required and technical execution are impressive.  They’re so good that you couldn’t even tell that they were there if it weren’t for the implausibility of the final result (see: Angelina Jolie’s cheekbones in Maleficent.) They’re like GMO’s: ubiquitous and almost impossible to entirely avoid. I don’t dislike them because they’re bad, per se. I dislike them for the squishy reason that they’re almost always… just, well…too much. They bore me because it takes all the work, and therefore all the fun, out of co-creating the visuals of an art piece along with the originating artists. When the exact effect is dictated to you (see: ninety percent of the last Star Wars movie), you are subject to the CGI-maker’s vision. When you participate in a non-CGI art piece, such a live theater, you get to imagine the fine details in and make them most meaningful for your own self. It’s the difference between watching porn and having sex. 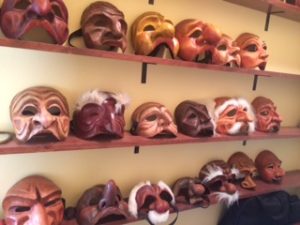 Puppets are a glorious example of viewer-participatory, non-CGI art. Every grownup watching a puppet show *knows* that the puppets aren’t real, in the living-breathing sense. And yet, they are. The audience believing in them, actively participating in the show by lending their belief and internal interpretations, brings them to life. I adore puppets for this reason. Also, puppets are so much fun!! Try watching puppets and not smiling. Just try it. Betcha can’t do it.

The guy in Denver who knows puppets is Nick Trotter. He operates Circo de Nada, an experimental Commedia Dell’Arte troupe that specializes in improvised performance featuring puppets, masks, and minimalist props and sets. His workshop is a labyrinth of faces and creatures waiting for the master’s hands and the viewer’s eyes to animate their dormant spirits. You can feel the friendly ghosts’ weight when you pick up their physical frames. They’re itching to play with you. 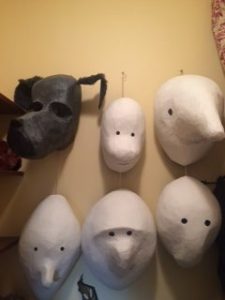 Some of the masks in his collection are entirely improvised and minimalistic. Faces appear in everyday objects all around us and a master can summon life into them. (See: photo of Nick in the doorframe. The mask above the door was rescued from found cardboard.) Others are painstakingly coaxed out of wood, leather, paper, or latex and treated with the colors and accoutrements of life such as blushing cheeks, fierce eyebrows, and even blemishes. I’ve put them on and felt their power prompt their own character out of me. I’m a bit less myself and a bit more someone else when collaborating with a great mask. 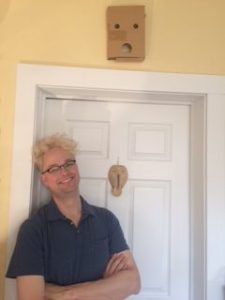 Nick’s puppets are close cousins of masks and equally wonderful. They range between the Baroque elaboration of a multi-person costume like Snuffleupagus and the Spartan minimalism of a sock puppet. Nick takes this even farther by creating puppets using only his unadorned hands. (I mentioned last week that I admire a man with handsome hands. Nick’s are lovely.) It sounds weird that a dude’s naked mitts could become a charming persona, but they totally do, if you’re willing to let your subconscious meet the performer’s and create together.

My current favorite in Nick’s collection are the shadow puppets. He’s wrought a series of characters into life for his adaptation of Shakespeare’s Henry IV and they’re delightful. The production incorporates shadow puppetry, live action, and minimalist props that leap from shadow to tangible and back. It’s strange and outlandish, just like the story itself. 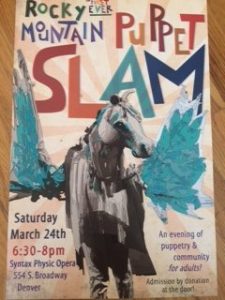 If you’d like to see some of this magic in person, head down the Syntax Physic Opera this weekend. The Rocky Mountain Puppet Slam is happening! A group of puppeteers from across the Front Range, including Katy Williams andAaron Vega, will be gathering to celebrate puppets of all kinds and the art of creating with them. There will be a life-sized pegasus puppet. I don’t know what it will be doing, but it doesn’t matter. Anytime you have the chance to see a pegasus, you take it. The full spectrum of puppets, from hands to horses, will be there with a number of amazing puppeteers bringing comedic, heartfelt (and sometimes mature) content, rendered through the voices and characters of their creations.

While you’re there, you’ll be well-served by the Syntax Opera. It’s a charming bar with maybe the weirdest theme I’ve ever encountered: an old-time medicine show. The walls are illustrated with old posters advertising patent medicines for every ailment and a glass cabinet of instruments and remedies from a pre-FDA era. The stage is lined with red velvet and set both up and back from the audience. The stage is so high and deep that the effect is a bit like a shoebox diorama. The performers are framed by the stagefront, like figures in the tableau. (As a performer, 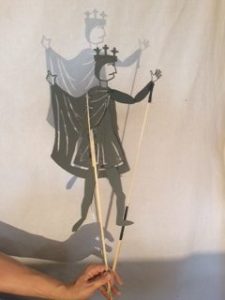 the velvet lining and the stage offset makes it harder to hear audience feedback and lends a sense of dreaminess to the performance. I suppose that’s appropriate for a patent medicine-themed venue.). It’s unusual, but fits the aesthetic of the place.

The bar serves up drinks both old-fashioned and modern and small plates that deviate from the usual fried fare of bar food. (Their cheese plate is excellent.) It’s the only place I’ve found locally that has Pimm’s No. 3 in the well. And here’s the all-important Restroom Review: the Syntax bathrooms are clean and quirky–the floors are lined in thousands of pennies set in resin. They’re also roomy and at least one is unisex-single-occupant, which is always a nice option.

So, get out your sense of wonder and delight! Give yourself the pleasure of co-creating a work of art with some of the region’s most enjoyable artists by watching and believing in their puppets. You won’t find a more magical art form or a more delirious venue. I promise that you’ll feel like a kid again…but like a kid who can legally drink a vintage cocktail while watching an 8-foot equine puppet.

Jessie Hanson
Jessie Hanson lives and works in Denver and couldn't be happier about it. Like the best-possible kind of Jekyl-and-Hyde scenario, she splits her life between science and storytelling. During the day, she performs clinical diagnostics and messes around with test tubes. At night, she performs behind the mic as a standup comedienne, in the air as a circus aerialist, and in rhinestones as burlesque dancer. She begrudges the hyper-inflated cost of a decent pair of false eyelashes. When she's not on stage, she sweating it out as an endurance athlete in triathlons and marathons across the West. She begrudges the hyper-inflated cost of a decent pair of running shoes. She's thrilled to be on board with OnDenver and writing about science, comedy, circus, athletics, and general fun on the Front Range!
Tagged: masksNick TrotterpuppetsSyntax Physic Opera