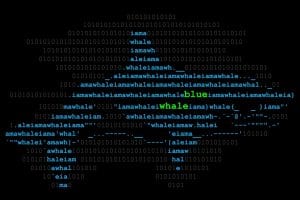 We all have that one friend…the one who says, “Let’s get the *big* bottle of tequila,” or “You wanna go birdwatching in Deadhorse Canyon?” or “I got you a new vibrator because you look so pathetic lately.” If you don’t have such a friend, please go find one. The one in my life is called Taylor and she forwarded me an email a few weeks ago with the header “wanna go?!” I don’t know where she finds this stuff. It was a promotional message from a theater company called the Pandemic Collective, “a non-profit 501(c)(3) theatre company based in Denver, Colorado, dedicated to infecting the masses through horror theatre.” (Is there such a thing as for-profit local horror theatre? The business model seems iffy, but I’d be happy to be wrong about that.) Because “local live horror” and “Taylor” are both what they are, I immediately purchased a ticket for a production called “Blue Whale.”

The whales were swimming through Globeville, which is about a mile from my house, or via Google maps, a 3.6-mile route. I’ve gotten into some quirky fun in Globeville, with one of my favorite bands, and one of the weirdest bands I’ve ever seen (more on this in the future), doing a double-feature at the Globe Hall. But the whale watching was happening at the Fort Greene, a small, quirky, vintage-feeling place that looks completely boring and ordinary from the outside, but is delightful on the inside. I hope that this is an apt comparison for me as a person. 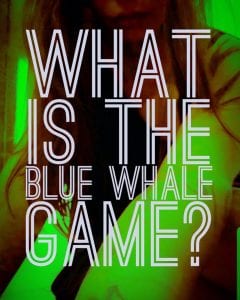 Taylor and I arrived a bit early to soak up the atmosphere and figure out what the hell was going on with this production. There were printed-out-on-shiny-paper photos of pretty girls mugging for the camera pasted to the floor; it looked Kylie Jenner’s Instagram account barfed in there. There was a projection screen on one side and instructions in the printed program to log into a social media/online chat site and participate in the conversation. Well, what’s the point of being a millennial if I can’t join an online convo? We both logged in. A strange, ginger-y fellow floated up in front of us (IRL, not online) and handed us strips of paper with instructions. We’re millennials who have followed strange fellows’ instructions all the way to master’s degrees, and so we obediently complied. Someone online responded to my posting in real-time.

I won’t spoil the story because I hope you’ll be participating in the next staging of it, but the plot line consists of a “social media-obsessed” teenager, vulnerable and open to influence, and a creepy online persona who captures her attention. It reminded me a bit of the Slender Man urban legend, combined with a shot of online stalking and a dash self-harm, mixed up into a cocktail reminiscent of Agatha Christie on Reddit. The experience began in the main bar with the audience witnessing a “video chat” between the two protagonists and then regressing in time to the beginning of the story as we, the audience, physically walked through to separate areas of the venue, indoors and out. As the story unfolded, it was hard to tell what was teenage weird and erratic behavior and what was being influenced by “The Curator,” the aforementioned creepy online persona, which I believe was the intended effect.

The highlight of the show was during the tense moment when there was a shift in control between one of the protagonists and The Curator. Again, without revealing too much plot, The Curator prompts her to an act of self-harm. Just at the peak of tension, when the character reached maximum emotional breakage, some dude in the back of the audience wavered, blanched, and then hit the floor in a full-body faint. The rest of us exchanged ‘is that supposed to happen?’ glances. Being millennials accustomed to the rigorous engagement of “posting my impulsive feelings on Facebook instead of actually going out to the protest event,” we all stood stock-still until the bartender revived the individual. The casualty limped outside to the fresh air, tossing a flaccid wave over his shoulder to 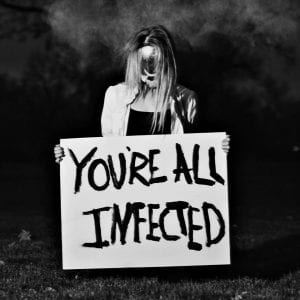 reassure us as he went. We carried on in our insulated aura of inactive concern. This is what we trained for, people.

While I enjoyed puzzling out the narrative, it wasn’t perfect, which is both the charm and the flaw in any art, including live theater. For instance, the plot wasn’t airtight: Why was one person vulnerable and the others not? Well, that’s being a teenager, I suppose. That’s also being a human, with uncontrolled variables. What’s up with a character that was implied to be pivotal and then the story never returned to them? On the positive side of the ledger, I really enjoyed the last scene, which was trippy and weird and totally up-close-and-in-your-face. This sort of interactive experience is why I put on pants and leave the house.

I do love odd things—I’m friend with Taylor, after all—and so I loved ‘Blue Whale.” I also loved the entire concept of the Pandemic Collective. Local/community theater can be its own sphere of weird; why not layer some horror on top of it? They’ve got workshops, internships, and more productions coming up. If I were a whale, I’d swim over and check it out.

Jessie Hanson
Jessie Hanson lives and works in Denver and couldn't be happier about it. Like the best-possible kind of Jekyl-and-Hyde scenario, she splits her life between science and storytelling. During the day, she performs clinical diagnostics and messes around with test tubes. At night, she performs behind the mic as a standup comedienne, in the air as a circus aerialist, and in rhinestones as burlesque dancer. She begrudges the hyper-inflated cost of a decent pair of false eyelashes. When she's not on stage, she sweating it out as an endurance athlete in triathlons and marathons across the West. She begrudges the hyper-inflated cost of a decent pair of running shoes. She's thrilled to be on board with OnDenver and writing about science, comedy, circus, athletics, and general fun on the Front Range!
Tagged: Globevillehorrorinteractivelive theater