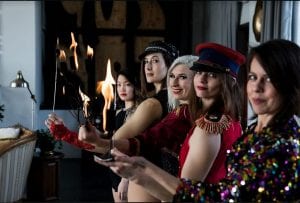 By my current estimate*, roughly 29% of social media is devoted to decrying why social media is so terrible for us. They’re not wrong. We spend a shocking amount of time comparing other people’s carefully-curated presentations of their mundane lives to our own, known-to-be-dreary existences. People who I know are boring as dirt in real life look like rock stars online. I am not immune to this: my phone tells me that I spend upwards of two hours a day staring at it, which is far more than I have ever spent staring at any lover I have ever had. Make of that fact what you will. I bring this up because I spend a lot of my daily two-hours of phone time gazing wistfully at people that I have enormous stage crushes on.

A bunch of those folks happen to inhabit the Invisible City, which is a arguably the coolest venue in Denver. It lies in a not-splendid area off of west Colfax, near a ton of low-brow Mexican eateries and a couple of Eastern-European bathhouses.  It’s been many things over the years, including a synagogue, and the space still has a reverent feel to it that quickly bleeds into irreverence as the nights progress. It has private and members-only events and they sound extremely cool. I, however, am not extremely cool, and can only report that I wish I were part of such festivities. (This is another example of my envy-from-afar, IRL this time, instead of online.) My experience with the Invisible City has been with the Rainbow Militia, an underground performing arts troupe that creates cirque-style entertainment with a decidedly steam-punk edge to it.

I emailed the folks at Rainbow Militia to inquire about covering their events. The person replied was someone I have spent time with at an aerials studio. I knew right away who she was when she responded to my message. She did not recognize my name or face. As I said, I am not extremely cool. But she was friendly and polite and I arranged to check out the next event with my circus-fan friend, dragging along our respective dudes who were not really interested, but were hoping to get laid at the end of the night.

We stuffed ourselves with Mexican food and then waddled over to the venue, where we found ourselves in a crowd of gorgeous, sexy, beautifully-turned out people. The online pics were not filtered, apparently, because all of the people looked as stunning in person as they did online. Or else the lighting in there was spectacular, which was also possible because of the gorgeous, lead-paned, multi-story windows. Aerial rigging points hung from the soaring ceiling, easily visible from the main floor and the balcony both. The house was packed, and we squeezed together like lightrail-at-rush-hour commuters, clutching glasses of white wine collected from a decidedly-sexy bartender in a Dickens hat. (Artful hats are strongly encouraged at Invisible City.)

This is the point where the people I worship from afar took the stage. The Rainbow Militia’s core members are circus folks with an emphasis on aerial acrobatics, which means that a lot of the acts performed up in the air. Aerial silks predominated, which pleases me because my aerial ambitions are almost entirely silken. An aerial duo did one of better duets I’ve seen. Another artist performed on a “lollipop Lyra,” which is an aerial hoop mounted on top of a free-standing pole, which I’d never seen before but was pretty cool. 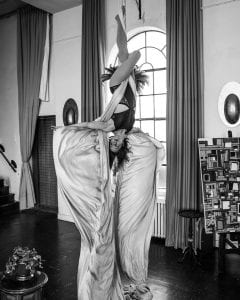 With the building’s history being a religious space and not a theatrical space (let’s talk later on how those things are sisters, though), the “stage” is immediately accessible to the audience. There’s no riser or orchestra pit or other separation. The artists perform within an arm’s length of the front row of the audience, eye to eye with us. Interspersed with the aerials were several floor-performers. A pair of acrobats did an impressive duo (may I someday have the arms and abs of either or both of them). A magician did a set, as well as an avante-garde couple that did something I find hard to describe, which brings us to the critical portion of this piece.

I adored the event as a whole: the space, the performances, the ambiance. But I’d be remiss if I didn’t mention a few notable bits that didn’t quite work. The magician was pretty good–but not quite flawless. I could locate the illusion in a couple of his manipulations. The acrobats were impressive, but not quite fluid as dancers.The avante-garde dancing duo (for lack of a better description–they didn’t really do a dance) was…weird. They rolled a tray of shoes out onto the performance space, adjusted some clocks, and then played the accordian while shouting questions about the shoes. I didn’t dislike it; it was certainly art; I admire their creativity and bravery to make something and put it out there; I didn’t *get* it. I didn’t dislike it, but I didn’t get it. I feel a bit odd critiquing the people whose skills I envy, but there it is. Maybe they envy my ability to create spontaneous rhymes. I doubt it, but maybe.

Live theater is its own magic, which means that seeing the realness of the performers and performances is part of the charm. I loved the show, because of the glimpses of imperfection, not in spite of them. It made my ambitions to be as excellent as they are seem like they could maybe, someday, be close to realized.

Here’s my Required Restroom Review. The bathrooms at Invisible City are great! They’re single-user, which makes the wait longer, but the atmosphere much better. The floors are dry, the faucets work, the soap dispensers are full. Lots of pleasant accoutrements and–here’s the best part–they play music! There’s a little bluetooth speaker pumping out jams while you pee, which is a splendid idea. Keeps you company, passes the time, and provides another level of privacy in a public space. Nice job, Invisible City!

The Rainbow Militia is having several events in the near future, including an artists’ happy hour on March 12, 19, and 26, a sexy Springtime party for multiples on April 26, and an Invisible Circus event on May 21. I can’t promise that attending any of them will make you extremely cool, but there will definitely be extremely cool people there. And if you post it on social media, you will *look* much cooler than I am.

*This estimate has absolutely no basis in science.

Jessie Hanson
Jessie Hanson lives and works in Denver and couldn't be happier about it. Like the best-possible kind of Jekyl-and-Hyde scenario, she splits her life between science and storytelling. During the day, she performs clinical diagnostics and messes around with test tubes. At night, she performs behind the mic as a standup comedienne, in the air as a circus aerialist, and in rhinestones as burlesque dancer. She begrudges the hyper-inflated cost of a decent pair of false eyelashes. When she's not on stage, she sweating it out as an endurance athlete in triathlons and marathons across the West. She begrudges the hyper-inflated cost of a decent pair of running shoes. She's thrilled to be on board with OnDenver and writing about science, comedy, circus, athletics, and general fun on the Front Range!
Tagged: Denverinvisible cityrainbow militiasocial media