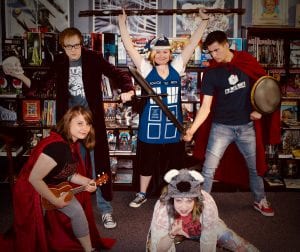 It’s never too late to enter the Dungeon!!! I’ve never done any role-playing games before, since my mother had warned me that it was a portal to demonic possession (long story—buy me a beer to hear the whole thing), but 2019 is the year to try something new, demons be damned. Mark Zuckerberg, a true nerd who I’m sure played his fair share of chaotic-neutral characters, recently suggested that I might enjoy a dip into the LARP end of the pool. Why not? I clicked the link and dove into the wild world of Woodlands & Wyverns, a partly-improvised, audience-guided, scripted theater piece playing at Vision Comics & Oddities (a storefront off of Federal Blvd.) and hosted by the Audacious Theater.

Audacious features “immersive” theater pieces, productions “that you can see, smell, taste, hear, and feel.” After attending the W&W production, I can affirm that I definitely experienced all of those, if perhaps not entirely as the production team intended. In case you haven’t noticed, it’s been really hot in Denver lately. The air conditioning system at Vision Comics displayed perfect comedic timing by completely pooping out on the night of the performance. A little portable swamp cooler chugged and huffed its best but didn’t make a dent in the fog of heat and sweat that hung over the audience. I definitely smelled and felt the experience. I had worn a velvet cape and magician’s hat (it’s a fantasy role-playing game, right?!), but I shucked them off before I got through the ticket line. At first glance, I thought the hand fans on the seating tables were props, but nope. We sat there and fanned ourselves like antebellum Mississippi doyennes. 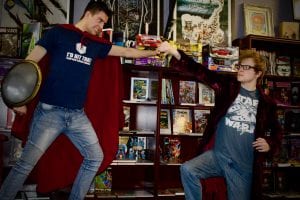 This description sounds unappealing, but I don’t mean it to be. This is the glory of live performance—it’s magic and we’re all in it together, sweaty armpit-rings included. It reminds me of the first hole-in-the-wall theater I fell in love with, where I used to run the light board. The A/C suffered from some kind of HVAC/plumbing-related dropsy, where if you flushed any toilet in the building, the central A/C would conk out and refuse to revive until it had rested overnight. I had to scramble down out of the light booth moments before every intermission in order to shut off the A/C before any guests hit the restrooms, then let it recuperate afterward until I could see the sternum-sweat soaking through the shirts of the players on stage. Pit-rings weren’t cause enough, but sternum-puddles were the cue for cooling. Ah, the salad days…anyhow, the comics shop was a bit hot and sweaty, and we all soldiered onward in good humor and good faith. 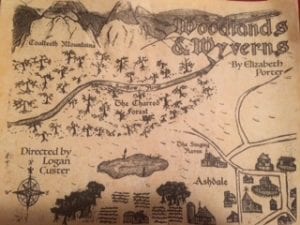 Role-playing, including audience participation in W&W, starts with a character. An artless lad belonging to a shock of red hair tried valiantly to assist me in creating one. This involves more official forms than applying for federal disability benefits and also an astonishing amount of math. There were multiple double-sided sheets explaining the tribes and clans, powers and religions, special attributes and traits, and lots of gang affiliations that I could make neither heads nor tails out of. Once you have your tribe, race, talents, standards and 23andMe results, you have to calculate how to balance your attributes against the minimum diameter of the elliptical orbit of Venus, divided by your mother’s maiden name. I think the quadratic equation is involved. The ruddy lad’s best efforts on my behalf were charming but ultimately futile. I gave up and just watched the show; I had no idea that fantasy involved so much paperwork.

The theatrical piece itself was a conglomeration of script and choose-your-own-adventure. The cast of youthful players began the scene and, in true LARP fashion, when a fork in the plot’s road arrived, the “S.T.” (Storyteller, the analogue of the Dungeonmaster, or leader of the game) would offer choices and accept input to steer the game down whichever pathway appeared. Audience members, including myself and my escort for the event, got to be NPCs, “non-player characters,” a concept that also had to be explained to me; I really should have had a case manager for my LARPing adventure. NPCs are entities that the game needs, but who are not the active agents who are actually playing the game. I donned a cape and mask and trotted obediently up to the stage area and acted out the S.T.’s narration. Several other audience members also were NPCs, which seems to be a non-union position, but a great deal of fun.

Like all good LARPing, W&W involves a lot of fancy dice. Big foam ones that you roll like kickballs. Little jagged ones that look like cardinal-numbered shrapnel. Regular ones that you mysteriously refer to as “dee-six,” even though they’re the same ones your grandma plays Yahtzee with. Sometimes the dice are calculated into your sheaf of character paperwork; sometimes they make the players do different things. Sometimes you lose one and so you make up a number and just pretend that that’s what the dice rolled. I mean, LARPing is about pretending, right? 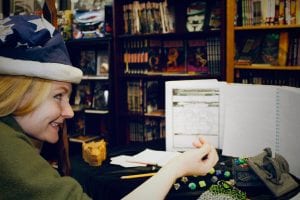 The entire show was the loving handiwork of Elizabeth Porter, who looks like what Kirsten Dunst would look like if she didn’t have a glam squad on speed dial, which is to say, a fetching blonde. She wrote the scripted parts and the options for how the improvised parts could go, including elaborate maps of the world of the game. As an artist who peaked with stick figures, this amazes me. The critiques I have of the script itself is that there were a few odd moments of “breaking the fourth wall,” where the players acknowledge the audience, and that it tackles some big social issues that, while worthwhile, slowed down the gameplay. On the positive side, the maps, narrative, and characters were engaging and an obvious labor of love; the players were having a blast performing, which means the audience was having a blast watching (and participating, whilst fanning themselves). I also want to call out that the snickerdoodle cookies served at the concession stand are among the best I have ever eaten, which has nothing to do with the play, but is saying a lot, coming from someone reared almost exclusively on church-basement potluck suppers.

I’m going to call out one particular moment—spoiler alert!—of delight in Porter’s script: she wrote out an homage to Shakespeare in her stage direction “exit, pursued by hawk-bear.”  I *saw* this happen and wondered if it was deliberate. I approached her after the show and asked—and it was! That is probably the nerdiest thing that happened in a very, nerdy night. 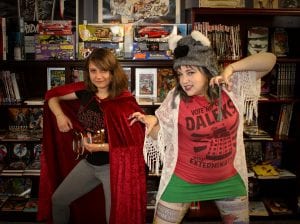 And the night was nerdy, indeed.  I was surprised by how *into* this these folks were! I’d always assumed that the stereotype was more joke than reality, but nope. It’s the real thing. I suspect that if I confessed to having no clue what universe (Marvel or DC) Spiderman belonged to, they would, kindly and good-naturedly, trap me in the comics store for upwards of sixteen hours while they explain in minute and excruciating detail, exactly what the difference is. There would certainly be paperwork involved.

I feel pretty confident that I am not, at this moment, under demonic control. Demons don’t appreciate good cookies, and I still do. Woodlands & Wyverns was a delight to play along with, in no small part because of the obvious delight and devotion of the creator and cast. Sure, LARPing can be nerdy, but it’s grownups playing make-believe. What else do grownups really *play* at? We could all use a little more play in our lives. If you can’t make it to W&W (its run is limited), check out the other offerings at Audacious Theater. If Elizabeth Porter is any indication, they’ve got an eye for talent and a taste for the curious.

Jessie Hanson
Jessie Hanson lives and works in Denver and couldn't be happier about it. Like the best-possible kind of Jekyl-and-Hyde scenario, she splits her life between science and storytelling. During the day, she performs clinical diagnostics and messes around with test tubes. At night, she performs behind the mic as a standup comedienne, in the air as a circus aerialist, and in rhinestones as burlesque dancer. She begrudges the hyper-inflated cost of a decent pair of false eyelashes. When she's not on stage, she sweating it out as an endurance athlete in triathlons and marathons across the West. She begrudges the hyper-inflated cost of a decent pair of running shoes. She's thrilled to be on board with OnDenver and writing about science, comedy, circus, athletics, and general fun on the Front Range!
Tagged: Dungeons & DragonsLARPnerdrole-playing comicstheater