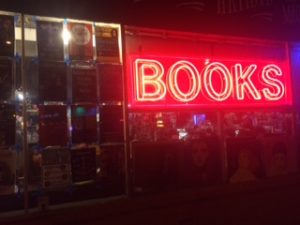 Live theater is magic. That’s why I love it so much. There’s a long road between the initial impulse to express something theatrically and the concurrence of ability and opportunity to weave magic with an audience. Lots of us aspirants walk that road via open mics, which have a bit of a dodgy reputation. Open mics are notorious for being

They’re the modern day pig-in-a-poke, a grab bag of unknown quantities. Performers come to workshop material, polish their chops, get some recognition from an audience. Coffee houses are known for endless three-chord-sad-song open mics and comedy clubs for terrible jokes from shaky comedians. I’d never heard of a magic open mic until I stumbled upon one that happens at the Mutiny Cafe on Broadway and Ellsworth. Incidentally, the Mutiny is just one block from the Hornet bar which has had three cars crash through its walls in 2018. There’s no connection here except that this is a crazy series of incidents that seems as unbelievable as a magic trick. 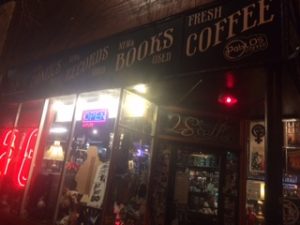 Sometimes live theater is literally magic, and I love that, too.  I think magic a genuine art form, as Ricky Jay would agree. I know some magicians and have even written about them before. I love live performance of all kinds (comedy, dance, music, whatever) and magic seems like something where you must master a number of stage skills to be both believable and entertaining. Comedians have to talk convincingly and engagingly. Dancers have to move smoothly and effortlessly. Singers must nail the music and the audience connection. Magicians have to both talk to the audience and dance with their hands. They don’t, however, have to sing, although I suppose that might be useful, too. If anyone knows a singing magician, please alert me: I’d love 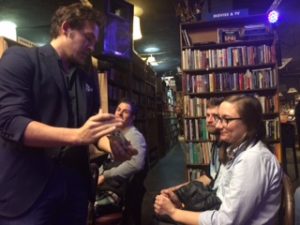 to see their act.

Even expecting no singing, I was curious about what the magic open mic might entail. I borrowed a car because mine was destroyed in a crash (NOT my fault) a few weeks ago (NOT into the Hornet) and drove my boyfriend and myself to the Mutiny to check it out. I have a soft spot for the Mutiny because that’s where I met up to chat and get to know an extremely strange guy I later performed a lot of really weird acts with, 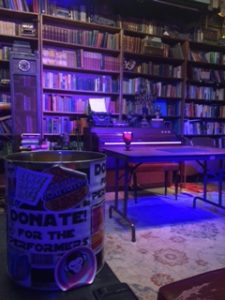 which were not magical but were definitely *alternative.* At several points, he lit me on fire. But that’s another story. Nobody gets ignited at the Mutiny Monday night magic open mic, although I’d also love to see that.

The Mutiny has a generous coffee-and-pastries bar and I bought a drink and a piece of vintage pin-up art (because who doesn’t like looking at naked ladies?) and then settled in to see the show. It was…fun. The host, James Lopez, whom I had actually seen a couple of weeks before with the Rainbow Militia, was charming and engaging. There were about 20 of us in the audience, of whom I guess maybe five, including my boyfriend and I, were not participants or the significant others of participants. No matter. The performers were just about exactly what I expected. Lopez made a couple of remarks about some of them being “private performers,” which is not a term I am familiar with. I wonder if it means something like “in-the-bathroom-mirror performers.” I’m not saying that the acts weren’t worth a 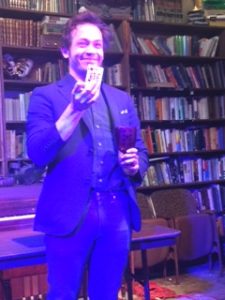 watch, because they were. But also, it’s a free open mic and David Copperfield wasn’t going to be there. Who did show up were some genuinely charming folks with an obvious love for their craft.

Brief aside: all the participants were men*. I like men, as a rule, but get tired of them taking up so much space in the spotlight. Are there any lady magicians out there? I can’t think of a famous one offhand. The sausage-fest is not the fault of the open mic organizers; it’s just my observation. I wonder what these men do when they’re not doing magic. Are they municipal lawyers? Middle managers at Target? Shift leads as Snarf’s? Where do these moonlighters go during the daylight? There was some polarization in the age ranges; the performers tended to be either Millennials or youngish Boomers/oldish Gen X-ers. Not a lot of mid-career guys up there. Anyway.

So was it magical? Yes. Live theater performers build a fragile, beautiful, original reality with their audience and 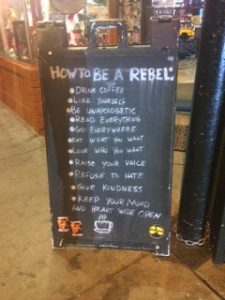 that’s always magical. Was it fun? Yes. If the performers are having a good time, then the audience is having a good time. I genuinely enjoyed both the tricks and performers. My boyfriend is a hardcore atheist and skeptic in general and I’m pretty snarky myself, so we tried hard to figure out the mechanism behind the illusions. Sometimes we felt pretty confident that we could guess how it was being done. Sometimes we were totally baffled. Chris York, in a Christmas tie, was genial and polished. Some realness happened with a magician named DJ who told a narrative of his life as he turned the cards over. A hoop-earringed, turbaned guy named Christian Chackmool did a nifty trick with a suit jacket. William Rader, a dimpled cutie-pie with elegant hands like a giraffe, if giraffes had hands, did some manipulations with a ring-and-rope and cards. If Michael Buble did magic, he might do it like William Rader.

Here’s the part where I confess that my snarkiness turned publicly obnoxious. I am not proud of this, but social skills are not my strongest suit. The last magician of the night was Bob the Magician. I’ll say this: he has an energetic schtick. He’s the magician who doesn’t actually do any tricks, but has mastered the art of talking fast in a funny hat. None of his tricks were any more mysterious than your uncle pulling a quarter out of your ear when you were six. Even with high energy, unless you’re the Gamarjobats, this is a three-minute schtick. By the time he got to six minutes and was flirting with putting his hand in a rat trap. I tired of the tease.

“Sure, Bob, now actually do it,” I heard myself blurt out.

Yep, I heckled one of the performers. At an amateur open mic. Because I am not a nice person.

A white dude actually did the best trick of the night, which was nothing more and nothing less than skillful manipulation. William Rader did a long series of legerdemain involving invisibly flipping the cap of an ordinary, non-retractable pen from one end to the other. There’s no magic here except the brilliance of excellent handwork. When done this well, it’s endlessly fascinating. I’ll also call out that the host, James Lopez, did some really charming stuff with cards and coins and general likeability.

This bit of mystery happens every third Monday at the Mutiny, and if you want to make it a night of it, hit the magic show for some illusion, then the Pie Hole for a hot slice, and then the Ooh La La burlesque show at 3 Kings for some pretty ladies to balance out the maleness of magic. You can also find more magic at the Denver Magic Show. We could all use a little more magic in our lives.

*at least as far as I read their social presentation. Please pardon if I misassigned anyone.

Jessie Hanson
Jessie Hanson lives and works in Denver and couldn't be happier about it. Like the best-possible kind of Jekyl-and-Hyde scenario, she splits her life between science and storytelling. During the day, she performs clinical diagnostics and messes around with test tubes. At night, she performs behind the mic as a standup comedienne, in the air as a circus aerialist, and in rhinestones as burlesque dancer. She begrudges the hyper-inflated cost of a decent pair of false eyelashes. When she's not on stage, she sweating it out as an endurance athlete in triathlons and marathons across the West. She begrudges the hyper-inflated cost of a decent pair of running shoes. She's thrilled to be on board with OnDenver and writing about science, comedy, circus, athletics, and general fun on the Front Range!
Tagged: coffee shopmagicmagicianMutinyopen micweeknight