Puppets are like drugs: every culture has them, most people have tried them, and some of us have succumbed to non-salvageable addictions to their pleasures. I include myself in the ranks of that latter group. I find all kinds of live theater to be magical, but I especially love puppets. I find them enchanting; they’re just the right distance away, on the other side of the uncanny valley, where we trust them as humans (regardless of their corporeal form) AND they can do and say things that actual humans can’t. They embody the whimsy and fantasy of our imaginations, but are tangible in the present. They gave us special effects long before CGI was a thing. They’re just fun. I’m not sorry about this addiction and I’m not trying to kick the habit. In fact, I indulged myself in that euphoria again this week when I attended Show of Hands, a production of The Munthly Show and a comedic gameshow hosted by a puppet of extraordinary size. 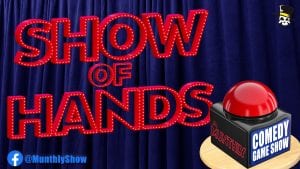 I mean, not *humongous* size. Nothing the size of the sofa-come-to-life in Neverending Story or the construction cranes repurposed as giraffes in the Broadway version of The Lion King. Munthly, the namesake and host of the show, is a torso-sized puppet, a la Fozzie Bear, who is embodied by his and the show’s creator, Thompson Powers. Powers dons the puppet, which hovers over a pair of M.C. Hammer pants that contain the bottom half of Powers, and brings Munthly to life. Powers-via-puppet then proceeds to host a gameshow that features a panel of real-human guests contestants.

I didn’t have a rigid set of expectations about what a puppet-based gameshow might be, but I ordered up my gin-and-tonic and awaited the wonders that puppets promise. Turns out that a puppet-based gameshow contains “squishy totems.” I find myself equally enchanted by this idea and unable to define what, exactly, is their purpose is. I’ve handled several squishy totems in my life, usually grasping them during venipunctures for donating blood. I didn’t know that they contained puppet magic, but I guess they’re both connected to hand-based manipulations. 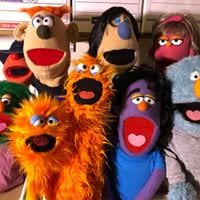 Like any good late-night show, Show of Hands opens with a comedic monologue by a local comedian, who also later sat on the panel for the gameshow. I am always super skeptical about comedians because I’m judgemental and have a superiority complex. I was ready to rip the guy to shreds, but he actually made me laugh. So kudos for Sean Wissing!

After the comedian, Munthly brought the show back to the game portion. The gameshow asks people who are good at being funny to answer questions that have nothing to do with their knowledge base. I learned a lot. For instance, there are more than twenty recognized ways to spell “Chanukkah” (Hannukkah, Hanukkah, Chanukah…) I learned some stuff about Daniel Day-Lewis, who is entirely unrelated to Channukka, but would definitely win an Oscar if he portrayed either Judas Maccabeus or a menorah.

The panelists were funny and Munthly was charming and yet…I wanted more. I wanted more puppets! I wanted the puppets to reach beyond the zone that we humans, constrained as we are by social norms, are expected to stay within. 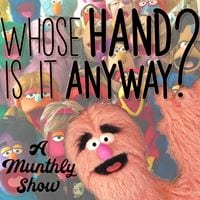 One of the lovely things about writing this column is that it brings me to see a broad spectrum of live performing arts. I see polished productions that have been running for decades. I see the rough-draft of shows that are still developing before they open the door for audiences. Show of Hands was fun–puppets!–and a little unfocused. Powers has 50 minutes to play with and it felt like he was still figuring out exactly what to do with those 3000 seconds. Having seen a bit more of Powers’ work in other contexts, and even having had a peek at his puppet atelier (it’s really super cool! Maybe he’ll let me write about it someday?!), I think that this format is going to develop and find its footing (handing?). It’s worth a watch now and it’s one to watch going forward.

Jessie Hanson
Jessie Hanson lives and works in Denver and couldn't be happier about it. Like the best-possible kind of Jekyl-and-Hyde scenario, she splits her life between science and storytelling. During the day, she performs clinical diagnostics and messes around with test tubes. At night, she performs behind the mic as a standup comedienne, in the air as a circus aerialist, and in rhinestones as burlesque dancer. She begrudges the hyper-inflated cost of a decent pair of false eyelashes. When she's not on stage, she sweating it out as an endurance athlete in triathlons and marathons across the West. She begrudges the hyper-inflated cost of a decent pair of running shoes. She's thrilled to be on board with OnDenver and writing about science, comedy, circus, athletics, and general fun on the Front Range!
Tagged: comedypuppetstheater