In the Pursuit of Home 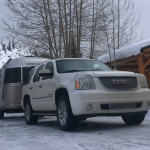 Four hours ago, I blew a fuse on my inverter. Four hours and twenty minutes ago, I didn’t even know what an inverter was or that half the plugs in my Airstream were powered by an inverter, which is monumentally different (and altogether far less powerful) than those plugs that are grounded. Learning. Don’t plug a space heater into an inverter circuit. If you’re worried about my lack of electric plugs at this point in the story, don’t be. My grounded plugs are still working and my Airstream itself has power (praise God because it’s a whopping seven degrees outside). The major concern here... Read More