I am 1 of 65 Million Epilepsy Warriors Around the World 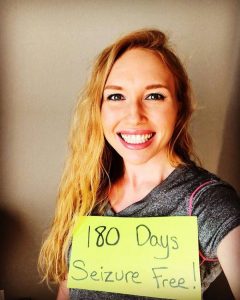 Did you know that November is Epilepsy Awareness Month?  November was declared National Epilepsy Awareness Month in 2003 to help end the stigma surrounding the condition and to generate education and understanding for those living with epilepsy. People all around the country get involved and show support for epilepsy awareness to help promote change for those who are affected. I am one of approximately 3.4 million people in the U.S. living with epilepsy and 65 million people worldwide. Those affected by the condition are more than those affected by autism spectrum disorders, Parkinson’s disease, multiple sclerosis and cerebral palsy combined.  Epilepsy is the cause of an annual 50,000 deaths, which exceeds the annual number of deaths caused by breast cancer.  One in 26 people in the U.S. will develop epilepsy at some point during their lifetime. Each person with the disease is different and a third of all people living with epilepsy cannot control their seizures because no available treatment works for them. In addition, there are so many more people with epilepsy that live with harsh side effects from seizure medication as a price to gain control of their seizures. In addition to the 30% of individuals living with uncontrolled seizures, approximately 1 out of 1,000 people will die from Sudden Unexplained Death in Epilepsy (SUDEP) each year. The risk is increased to 1 in 150 for young adults with uncontrolled seizures, which is the leading cause of death among those who suffer from the condition. Researchers have not found the cause of SUDEP, which often occurs during sleep, making answering questions more difficult. Despite underfunding and the lack of research surrounding the condition, there are foundations and individuals all around the world raising awareness to try to find a cure and save lives.

The Epilepsy Foundation  is a national non-profit and are leading the way to making a difference for those suffering from epilepsy and working hard to accelerate therapies to stop seizures, find cures and save lives. Medical marijuana has the potential to save lives and the Foundation believes that the Drug Enforcement Administration (DEA) should end restrictions that limit clinical trials and research into medical marijuana for epilepsy. The Foundation is committed in the advocacy program and has lead the fight since 1968 to secure federal funding for epilepsy programs, ensuring access to health care, fostering biomedical innovation and safeguarding disability rights for those affected by the disease.

Another organization dedicated to spreading awareness and helping those in need are the American Medical Refugees (AMR), which is non-profit founded by Amy Bourlon-Hilterbran.  This organization assists families who have relocated to Colorado from another state or country so they or their loved one can become a medical marijuana patient and access cannabis legally for their condition and wellness. Amy is also the creator of the Talk to the 6630507 Hand campaign to raise awareness about the patent held by the U.S. government documenting the medicinal benefits of the plant, including its antioxidant and neuroprotective qualities. You can be a part of the campaign by posting a picture of your hand with the patent number written to raise awareness, advocate, and change the perception around the world.

One of the most known cases for epilepsy treatment with Cannabis was in Colorado with the case of Charlotte Figi. Charlotte started suffering from seizures at 3 months old and started medical cannabis treatment at age 5, which reduced her over 300 weekly seizures to 2-3 per month by using the strain developed for her as treatment known as Charlotte’s Web. Heather Jackson’s son, Zaki, is another success story using cannabis therapy and Heather has established The Realm of Caring Foundation, which improves the lives through research, education and advocacy that support over 30,000 people around the world. Realm of Caring believes quality of life matters and works hard to spread awareness and knowledge to expand access to those in need. The ROC also holds an annual race for epilepsy awareness that I had the wonderful opportunity to be a part of this year! In October, we gathered together in Colorado Springs where Realm of Caring is established and raced to support the each other and our efforts for the cause.

Despite being one of the world’s oldest known medical conditions, fear and misunderstanding still surround those affected by epilepsy, which leads to discrimination, lack of funding and fear of discussions about the condition. You can help join the movement to raise awareness, educate, fund research and find strength in community by getting involved and sharing your story or reading stories of others! For those living in illegal states, like my home state of Missouri, the laws need changed. Among those working tirelessly to change the laws and dramatically improve the quality of lives for so many people is New Approach Missouri.They are gathering signatures to change laws allowing those who need access to marijuana the right. Check out New Approach Missouri to find out more information and help gather signatures, donate or volunteer.

Anyone can help raise awareness during Epilepsy Awareness month and beyond by wearing purple, sharing epilepsy related information on social media or joining one of the social campaigns to spread awareness, by donating, volunteering, speaking up to Congressional representatives or participating in a walk or run, like Realm of Caring‘s annual race for epilepsy. I ask you to join the fight to raise awareness, educate others, fund new research and empower the community affected by this condition. Since medical marijuana has been proven to help many suffering from epilepsy and has the ability to save lives, I urge you to discuss the topic and to get involved so we can make a difference to ensure people with seizures have the opportunity to improve their quality of life and live their life to the fullest!

Sponsored Content Disclaimer
This content has been published by OnDenver in conjunction with a local business, organization, or community member. This content may have been paid for, and also may include links not directly associated with OnDenver or its parent company, MetroSampler. We do our best to ensure that all content is consistent with our core beliefs and is safe/valuable for our audience. To inquire about sponsoring your own content, please email info@metrosampler.com.
Tagged: ##6630507#aimforzero#amr#breakthestigma#Cannabis#cannabisculture#epilepsy#myshotatepilepsy#nam2018#seizures#strong#therapeutic#wellbeingathletesathleticsbuffstonercannabiscommunityColoradodocumentaryexercisefitnessfitstonergymhealthhealthystonerhempMarijuanameditatemeditationmindfulnessmjfitnutnutritionsportsstrengththerapywellnessyoga