It’s Time to Pull Off the Impossible 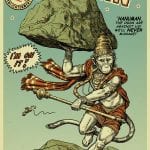 Ravi Zupa has released the third of five posters in the monthly series titled Marvelous Adventures. All characters for the series are pulled from Hindu mythology and showcase some of the oldest superheroes on Earth. The print, titled It’s Time To Pull Off The Impossible, features Hanuman, who represents self control, strength, stamina and devotion. “There are many other monkey heroes and trickster characters in mythologies throughout Asia and many of those stories are related to Hanuman,” says Zupa of the poster’s key image. “The story depicted here is one of his most famous adventures.” During... Read More

Tagged: it's time to pull off the impossibleprintsravi zupa 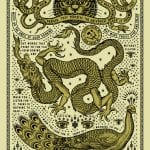 As winter fades away and the natural world begins to wake, Ravi Zupa has ushered in spring with the release of the fourth print in his Tattoo Gratitude series. “Every year around this time, there seems to be a lot of chaos and upheaval,” Zupa says. “Perhaps this is partly because of the change of seasons as we recover from the darkness of winter and begin our return trip toward longer days. Springtime is a violent and destructive phenomenon first, before it gives way to birth and nurture.” This fourth piece in the series depicts a dragon, a cat who has caught a snake, and a peacock. The... Read More 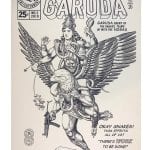 RAVI ZUPA RELEASES NEXT PRINT IN COMIC BOOKCOVER POSTER SERIES, MARVELOUS ADVENTURES Garuda Featured in Second Release Depicting Hindu Gods and Goddesses as Comic Book Heroes   Ravi Zupa has released the second of five posters in the monthly series titled “Marvelous Adventures.” All characters for the series are pulled from Hindu mythology and showcase some of the oldest superheroes on Earth. The print, titled “There’s Work To Be Done,” features Garuda—the courageous, loyal companion and mount to Vishnu in Hinduism. He symbolizes courage, strength and commitment, and is hugely... Read More