Home » Local Art » It’s Time to Pull Off the Impossible

It’s Time to Pull Off the Impossible 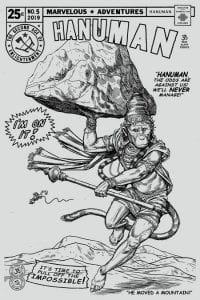 Ravi Zupa has released the third of five posters in the monthly series titled Marvelous Adventures. All characters for the series are pulled from Hindu mythology and showcase some of the oldest superheroes on Earth.

The print, titled It’s Time To Pull Off The Impossible, features Hanuman, who represents self control, strength, stamina and devotion.
“There are many other monkey heroes and trickster characters in mythologies throughout Asia and many of those stories are related to Hanuman,” says Zupa of the poster’s key image. “The story depicted here is one of his most famous adventures.” 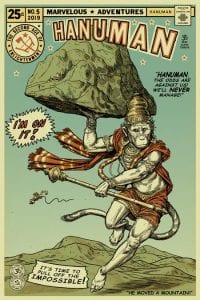 During a battle, Hanuman’s comrade Lakshmana was injured and the only remedy came from a specific medicinal plant which grew on a mountain in the Himalayas. Being the strongest and fastest in the group, Hanuman was charged with the task of traveling thousands of miles to this mountain to retrieve it.

When he arrived, he discovered that many different plants grew there and not knowing which was the right plant, he lifted the entire mountain and carried it all the way across India to the place where Lakshmana was dying.

Zupa says this is one of his favorite mythological stories.

“My wife and our team often say ‘Let’s pull off the impossible’ when we take on big art projects and ambitious goals and I think of this story at those times.”

The monthly series of five prints (each with five colors, 24” x 36”) is being released in limited editions
of 50 each. To order your own, visit Zupa’s online store or subscribe to his mailing list .

OnDenverAdmin
Tagged: it's time to pull off the impossibleprintsravi zupa