Home » Local Art » It is Inexhaustible 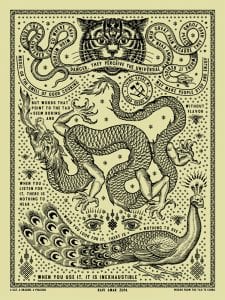 As winter fades away and the natural world begins to wake, Ravi Zupa has ushered in spring with the release of the fourth print in his Tattoo Gratitude series.

“Every year around this time, there seems to be a lot of chaos and upheaval,” Zupa says. “Perhaps this is partly because of the change of seasons as we recover from the darkness of winter and begin our return trip toward longer days. Springtime is a violent and destructive phenomenon first, before it gives way to birth and nurture.”

This fourth piece in the series depicts a dragon, a cat who has caught a snake, and a peacock. The words for this print are chapter 35 of the Tao Te Ching, reminding us that we have tools to center ourselves and stay clean-minded, regardless of what happens outside of us.

“Good advice for such a time,” Zupa says before adding, “I like this chapter because it describes this kind of clarity as utterly boring and ordinary.”

Zupa succinctly sums it up in his own words: Stay alert, stay ready and always draw from the well of calm inside you. That well cannot run dry. It’s Inexhaustible. The 18” x 24” poster is available as a one- or two-color version. Zupa has also released five totally unique variants. All are available on his website until sold out.

ABOUT THE TATTOO PRINT SERIES

This series was launched with the “Gratitude” print, available as a gift only to those who wear tattoos of Zupa’s work and the artists who create those tattoos. The second in the series featured Medusa and Rangda, while the third featured Buraq from the Islamic tradition and a buddhist version of Mahakala. See and read about the series on Zupa’s website.