Someday, when I’m rich and famous, I’ll have my own dressing room with a responsive thermostat and at least 35 watts of lighting. Until then, I’ll continue to prep for burlesque and comedy shows in a variety of dim, crowded green rooms that seasonally vacillate between frigid and sweltering. If these tiny purgatories didn’t contain some excellent people, they wouldn’t be half as much fun, which the same thing I would expect to say about an actual Purgatory.

I’ve been in a green room that also serves as the utility locker for the building’s main HVAC unit. I’ve been in a “green room” that is a limp, gaping curtain slung across a corner of a dive bar. I’ve been in a green room that doubles as the cubby hole under the staircase, such that the ceiling is a series of jagged ledges. I’ve been in so many green-cum-stock rooms that it feels entirely natural to apply false eyelashes and pasties next to gallon-sized cans of crushed tomatoes and 12-bottle cases of well whiskey. The green room I was in this weekend is one of the more unusual: it’s behind and below the kitchen, such that we burlesque performers have to climb a flight of stairs and walk through the fry station in our fringe-feather-and-rhinestone getups to get up to the stage. 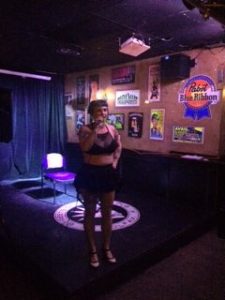 The venue is the Streets of London pub on Colfax and Humboldt and the show is Punk Rock Burlesque, produced and hosted by the fabulous Squeaky Springs. The host’s fluency and energy makes or breaks a show and Squeaky is one of the best in Denver. She’s got the skill of making an incohesive crowd into a rapt audience. Big stages and big houses are a lot of fun; the Streets of London has neither, thank god. Big size would ruin the zany, intimate edginess that this production offers. When you come to a Punk Rock Burlesque show, you get a truly intimate and interactive experience. It doesn’t seem like you’re watching a show with strangers; it feels like you’re sharing a party with your friends.

PRB has been running for about three years and I’ll go ahead and say…this is the most inclusive show in town. I use the word “inclusive” to mean gender and sexuality, certainly. PRB makes a point of being positive about sex, body types, relationship styles, gender presentation, and sexuality of all flavors. I also use the term to mean that the show encourages modern styles of neo-burlesque as well as the traditional “glamorous” acts. If you want to see a postmodern feminist striptease performed in a rhinestone Godzilla mask…this is the place. If you ever had a fantasy about your junior high lunch lady…you can indulge that here, too. And if you want a classic beauty in gauzy veils…you’re still in luck! 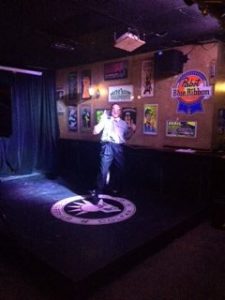 Another great aspect of PRB is that when you work for Squeaky Springs, you get paid. This might seem like an odd thing to bring up in this column, but bear with me because I think this is an ethical issue. Underground entertainment shows are notorious for not paying their performers. Improv almost never pays anything and stand-up comics often work on a pay scale somewhere between a drink ticket and five bucks. Burlesque dancers are usually paid *something,* but I’ve walked out of many shows with nothing more than gas and parking. Art takes time and investment (those sparkling costumes aren’t free!). Working for nothing devalues that time and investment. At this point in my career, I don’t work for free and if I mention a show here, it’s because I think the producers value their performers in both appreciation *and* currency. I think the ethics of cage free eggs is important enough to pay more for them and I think that the ethics of paying your performers is important enough to merit mention here. Punk Rock Burlesque prioritizes inclusivity *and* performers’ work. Check out the show and feel good about your choice to support local artists and live performers!

Delightfully “Sinful Sunday” takes place every Sunday night at 8pm. You can get an eyeful of every type of body 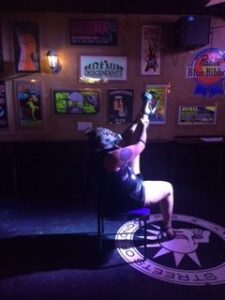 (mostly female, but sometimes male!) and a perky and funny earful of Squeaky. Following that, stick around for some Sexy Bingo or Sex Trivia (see a theme here? Streets of London is a nice place to explore some naughty.) The ticket price can’t be beat: it’s free! (Please be sure to tip the performers!) Streets of London is also a British pub and a live entertainment venue. They have walls full of British signage and tributes and they book music acts of all sorts, especially punk rock. Check out their Wednesday night comedy showcase or a live band rocking out on a weekend. Grab a gin and tonic from their generous bartenders and feel thoroughly a Brit.

I might never make it to the Big Time where I have a private dressing room with a star on the door and a concierge to bring me Skittles with the red ones picked out. I might never see my name on headlining the marquis. I’ll keep trying, though, and in the meantime, I’ll spend my time sweating or freezing in closets behind makeshift stages all over this town. If I do make it big, I know I’ll never find any people as willing to lend me eyelash glue or pasty tape as I can behind the fryer in a pub on Colfax.

Jessie Hanson
Jessie Hanson lives and works in Denver and couldn't be happier about it. Like the best-possible kind of Jekyl-and-Hyde scenario, she splits her life between science and storytelling. During the day, she performs clinical diagnostics and messes around with test tubes. At night, she performs behind the mic as a standup comedienne, in the air as a circus aerialist, and in rhinestones as burlesque dancer. She begrudges the hyper-inflated cost of a decent pair of false eyelashes. When she's not on stage, she sweating it out as an endurance athlete in triathlons and marathons across the West. She begrudges the hyper-inflated cost of a decent pair of running shoes. She's thrilled to be on board with OnDenver and writing about science, comedy, circus, athletics, and general fun on the Front Range!
Tagged: British PubBurlesquePunk RockStreets of London