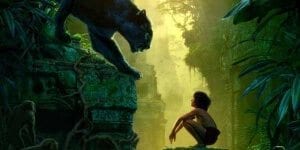 Every week before I see the movie I end up reviewing, I talk to my kid about it. He’s 8 years old, bright, and possesses a goofy sense of humor. Sometimes he’s interested in what I’m going to see. Other times, his attention is captured by more lofty subjects.*

I mentioned offhandedly to him that I was considering seeing The Jungle Book, the latest version of Rudyard Kipling’s venerable collection of stories. With the speed of a feral man-cub, he grabbed both sides of my face, leaned in close, and hissed, “I’m coming with you.” Having barely escaped a mauling from the hands of my offspring, we set out to the theater.

On the drive home, I quizzed him about the film, asking him what he liked, didn’t like, and his overall impressions. His capsule review is as follows. “The movie was awesome. The animals were cool. It was almost as good as Captain America: The Winter Soldier, but way better than Avengers: Age of Ultron.” No doubt many of you appreciate his efficient analysis and the fact that he’s not a windbag like his old man, but let’s go into a touch more detail.

Odds are you’ve seen Kipling’s jungle fable before now, whether it was the mysterious 1942 version or the beloved 1967 animated Disney classic. Maybe you’ve even seen the Soviet adaptation or the Japanese anime series. With the 2016 version, director Jon Favreau has made a gorgeous film that honors what has come before but is unmistakably its own thing.

Mowgli (Neel Sethi) is an abandoned boy growing up in the mythic jungles of India. He’s been adopted by wolves, and his pack father Akela (Giancarlo Esposito) and wolf mother Raksha (Lupita Nyong’o) dote on him as much as any other member of the pack. The black panther Bagheera (Ben Kingsley) watches over the boy, which is really good news, considering the tiger Shere Khan (Idris Elba) wants to make a meal of him.

Mowgli initially embarks on a journey to protect his pack, but it becomes one of exploration. He encounters the sinister python Kaa (Scarlett Johansson), the friendly bear Baloo (Bill Murray), and the scheming Gigantopithecus** King Louie (Christopher Walken). He’ll also struggle to learn what his place in the jungle truly is.

The Jungle Book is one of those films that demands to be seen in theaters, due to the artistry and incredible filmmaking craft on display. The sweeping jungle vistas, the natural light breaking through the foliage, the matted and wet hair on the animals, none of it is real. With the exception of actor Neel Sethi, every single thing you see in this film is computer generated. It was filmed on soundstages in a warehouse in Los Angeles. While nothing is real, everything feels real, a little more so, actually. The jungle feels like a physical and tactile place, and the animals look and move like live creatures. But small details are exaggerated, such as the mouths of the animals to allow them to talk, and this nudges things into the realm of fantasy, but not so much so that the suspension of belief is lost.

Jon Favreau was a good choice to direct this iteration. With films like Elf and Iron Man, he’s someone usually comfortable dealing with CGI without being overwhelmed by it. He also brings a sense of playful fun, and he always remembers to let the film slow down so we can hang out with the characters. There are long stretches of the film where Mowgli and Baloo are trying to nab honeycomb, or talking while lazily floating down the river. The narrative isn’t always being pushed forwards, but who cares? Favreau and screenwriter Justin Marks know that making an emotional connection with the characters is more important than following some hacky screenwriting how to.

Favreau’s voice cast brings their A-game, which is refreshing. We’ve all seen films where slumming actors put forth the minimum amount of effort to collect an easy paycheck. But just because this cast makes it look easy doesn’t mean they’re screwing around. As Baloo, Bill Murray is lazy, snarky, conniving, and ultimately winning, and he’s got fun chemistry playing off of Neel Sethi. Christopher Walken has one of the most distinctive voices and vocal deliveries in film. I admit he would not have been my first choice for voicing a giant ape. It just shows what I know, because Walken is silky smooth and terrific. Both Murray and Walken sing songs from the 1967 cartoon, performing “The Bare Necessities” and “I Wanna Be Like You,” respectively. They put their own stamps on them, and while this version only has a few musical numbers, it feels just right. Even smaller roles, like the late Garry Shandling as a neurotic porcupine, feel real.

But it would all fall apart if it didn’t feel real to Neel Sethi’s Mowgli. You never get the sense that he’s looking at a tennis ball or talking to a stand-in. Whether he’s being funny, scared, sad, or brave, he holds his own with some of the most accomplished performers on the planet. This kid has the goods, and he brings it in every scene.

You may want to be careful taking very young kids to see The Jungle Book. Shere Khan might be a bit too much for them, both in terms of jump scares and an overall sense of homicidal menace. The scene with Kaa is also pretty intense. It’s all because the filmmaking is so skillful that it feels like a real little kid is being placed in danger.

Like The Lego Movie, The Jungle Book is special. A “kid’s movie” isn’t expected to display such craftsmanship and heart. It’s not supposed to stick with you. My son has the attention span of a fruit fly, and after seeing a movie, he’ll usually offer his opinions, then drop the subject. But this film was different. He told me that “It’s not good. It’s great.” The kid’s got a point.

*I am, of course, talking about Pokemon. One must have priorities.

Tim Brennan
Tim has been alarmingly enthusiastic about movies ever since childhood. He grew up in Boulder and, foolishly, left Colorado to study Communications in Washington State. Making matters worse, he moved to Connecticut after meeting his too-good-for-him wife. Drawn by the Rockies and a mild climate, he triumphantly returned and settled down back in Boulder County. He's written numerous screenplays, loves hiking, and embarrassed himself in front of Samuel L. Jackson. True story.
Tagged: ben kingsleybill murraygarry shandlinggiancarlo espositoidris elbajon favreaujustin markslupita nyong'oneel sethiscarlett johanssonthe jungle book