I do a lot of weird things in my life and I sometimes forget just how weird they are. For example, I was recently backstage at a cabaret show and my facial expression betrayed my pensive mind as I thought about a personal problem.

“What’s up, sweetie? Why the long face?”

I looked up to answer. Waaaaay up, into the friendly, kohl-eyed face of a 6-foot-five-inch male samba dancer clad only in six-inch platform heels and one of the skimpier outfits from the Rocky Horror Picture Show. I confessed my dilemma and he proceeded to give me some very sound advice about being genuine to myself, while simultaneously applying a thick layer of cherry-red glitter to his lips. It later occurred to me that most people don’t get personal counseling from a 7-foot Frank-N-Furter. (Aside: this is a fabulous show and you should totally go see it!)

I wanted to see what was going on in his mind. Turns out, nothing much. We watched a bunch of stuff and it was all indistinguishable. The general effect could be titled, “GIF of the pistons in a 4-cylinder Volkswagen.” In some of the videos, I wasn’t even sure what was going on.

“What are they doing?”

“They’re doing [this thing] in [that variation].”

“How can you tell? The camera is way too close and all wobbly.”

“Trust me. I can tell. I’ve watched a lot of this stuff.”

After that, I just gave him some alone time and then we watched Breaking Bad together. What I did learn from that experience could be summed up in four points.

I found no reason to change my mind on these points until a couple years ago, when I was in a conflicted relationship with a total weirdo who had tickets to HUMP!, an amatuer-film festival celebrating homemade erotica. I had never heard of the event. I didn’t know that public viewings were even a thing anymore. The weirdo and I went together and encountered one of the several other women that he was banging at the time. As I said, our relationship was conflicted.

What I was watching, sitting in a dimmed theater with 500 other people, immediately broke from my Four Points. It was definitely not boring. Nobody looked plastic, in body or in facial expression. The women looked like they were enjoying themselves as much as the men. Production values were surprisingly ambitious.

The films showed dudes on ladies, and ladies on ladies, and dudes on dudes, and some people that were undefined defiantly enjoying their bodies. This was no furtive peek at boobies on your browser. It was an aggregate event. I’ve watched and performed in a lot of live theater. I’m attuned to feeling an audience coalesce and feed off the group’s collective enjoyment. This show felt just like that. We were corporately engaging in personal indulgence. 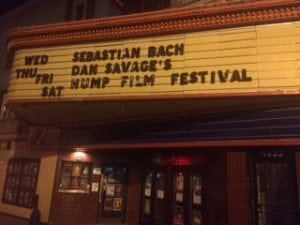 Such was my introduction to HUMP!, sex-positive broadcaster Dan Savage’s pet(ting) project. Every year, he puts out a call for submissions (there’s a joke in there somewhere) and people around the world make their own erotic short films. Like many festivals, such as the 48-Hour Film Project, each year has specific “Easter eggs,” challenges for the filmmakers to include. The results are hilarious, fascinating, insightful, and sometimes even sexy. Savage’s team collects them into 90 minutes of variety and takes the show on the road to cities around North America. Before each screening starts, there is a strict absolutely-not-joking moratorium on having and type of recording or mobile device in hand at any point during the show. They have hall monitors that watch for this. Nobody in an amatuer film festival wants a crappy, bootlegged image of themselves showing up online. 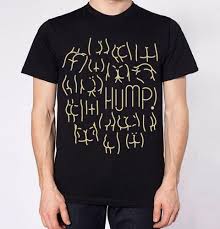 entertaining combo. Since the films are all amatuer productions, the sets are often the interiors of someone’s own home and seeing inside strangers’ houses is voyeuristically fun. Some of my favorite films have not included any sex or nudity at all. One memorable film consisted entirely of a guy standing in his underwear next to his fish tank, playing the accordion and singing his original composition about how hard it is to be gay when you’re too nerdy to get laid. During the second chorus, his cat walked through the scene. Another featured two partners debating after what acts it is not gauche to request that the other brush their teeth before kissing again. Not really “sexy,” but real, honest, and relatable. Truth is as important in sexuality as it is in comedy.

On the topic of truth in sex, I love that in HUMP!, many of the videos show real relationship partners. On the way home from that first screening, sitting in a car with the conflicted-relationship guy, I cried because one film had shown an encounter between two people that was unmistakably genuine and connected. Those two adjectives were completely foreign to any relationship I had ever experienced and represented something I desperately craved. These last couple 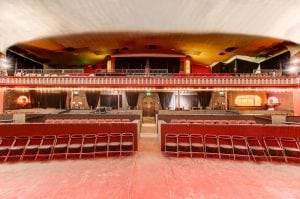 years, I attend with a guy who cares what I think and isn’t banging anyone else and I don’t cry in the car. It gets better, eh? 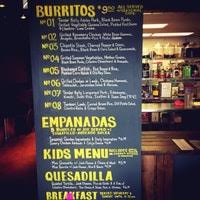 Here’s the next great thing about HUMP!: it’s coming to the Oriental Theater in Denver this very week! There are seven screenings and I expect that they’ll all sell out, so get your tickets ASAP. The Oriental serves up a full bar and an opera-house atmosphere in an historic venue. The Berkeley Bodega next door offers some snacks, but to really get yourself in the mood, I recommend pre-gaming at Scratch Burrito just down the street, where you can get a burrito the size of your head and a pitcher of beer. If that doesn’t get you ready to plunge into carnal self-indulgence, nothing will!

Jessie Hanson
Jessie Hanson lives and works in Denver and couldn't be happier about it. Like the best-possible kind of Jekyl-and-Hyde scenario, she splits her life between science and storytelling. During the day, she performs clinical diagnostics and messes around with test tubes. At night, she performs behind the mic as a standup comedienne, in the air as a circus aerialist, and in rhinestones as burlesque dancer. She begrudges the hyper-inflated cost of a decent pair of false eyelashes. When she's not on stage, she sweating it out as an endurance athlete in triathlons and marathons across the West. She begrudges the hyper-inflated cost of a decent pair of running shoes. She's thrilled to be on board with OnDenver and writing about science, comedy, circus, athletics, and general fun on the Front Range!
Tagged: Dan Savagefilm festivalOriental Theater