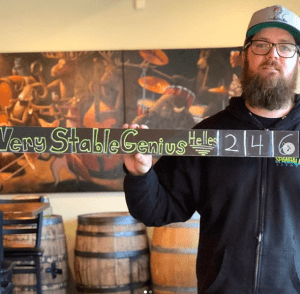 Surviving as a neighborhood brewery in Denver is not an easy accomplishment these days stacked up against the saturated competition. Darren Boyd, one of the founders of Spangalang Brewery, believes that as the customer and competition has changed within the industry, the market and brewing process will too.

Boyd has lived in Denver county for roughly 10 years after moving from Connecticut. He got involved in the brewing scene just as it was taking off in Denver and began working for Great Divide Brewing Co. After a couple years Boyd and his two other partners, Taylor Rees and Austin Wiley, all shared the intention of catching the first edge of the brewing wave and starting their own company detached from Great Divide Brewing Co.

Boyd and his partners opened up Spangalang Brewery in 2015. The Spangalang name and logo are a dedication to Five Points, the neighborhood they are located in. Historically, Five Points was one of the national hubs for Jazz music and the Spangalang is one of the renown jazz cymbal rhythms. Five years ago, when the founders were looking for a space this location stood out to Boyd because he felt the area was quiet and had a community with a background they could embrace.

“Jazz is the type of thing where you master the basics, then build yourself up to be able to improvise with other band members on the fly, without following any specific formula. Certainly there are parallels for us and the brewers that can come up with new ideas and push the envelope but still execute the basics,” Boyd said. 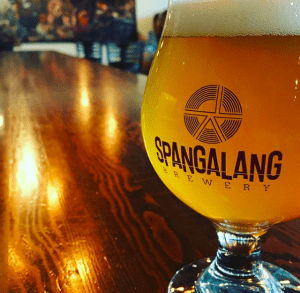 With the influx of breweries in Denver, Boyd believes that the industry is changing with the market now. A product which was once strictly the domain of the brewery to influence is now shifting towards the interests of the consumer. For Spangalang, Boyd believes they are allowing more risk taking and experimenting with their brews rather than focusing strictly on consistency as they had been in the past. Some of the beers brewed at Spangalang are the Pillow Talk IPA, Nightwalker Imperial Stout, the Salted Plum Table Beer, and an upcoming holiday IPA.

“Other than flavor, everyone has had to get a lot more savvy for marketing and label designs, for better or worse. It allows different breweries to express themselves and what they are all about, but creates challenges for the little guy, like us, who have less to spend,” Boyd said.

Though marketing and the consumer seem to hold more status for brewers than they once did, the end goal is always to create a beer the brewers are proud of. Boyd appreciates the artistic and collaborative elements of brewing above all. One of the recent collaborations they did was with Baere Brewing to make a Brett fermented ale. With this ale, the group also used an enzyme to make it a brut beer, which develops a dry and slightly funky grape taste. At the upcoming collaboration festival Boyd and his team hope to do even more experimental batches.

Community is how a neighborhood brewery such as Spangalang thrives. Jazz memorabilia and customer drawn coasters are showcased throughout the taproom. The brewery does not distribute at all and can only be bought through its one location. Therefore, nearly 80 percent of their customer traffic comes from people who live in Five Points and the other 20 percent is from people who believe the beer is special enough to travel to the taproom and try out. The taproom also hosts live jazz, artsy Mondays, and trivia each week as well as the Pickle Beer Society meetings.

To find out more about the beer lists, events, or to speak with Darren Boyd stop by the Spangalang taproom or visit their website at https://spangalangbrewery.com/

Helen Kuhn
Helen Kuhn is a writer hailing from the east coast. She moved to Colorado in 2015 to finish getting her Bachelor degree in English at the University of Colorado. Before making the move to Denver she interned with the Daily Camera in Boulder and with Philadelphia Weekly. She spends her times slinging drinks for work and writing poetry for fun. When she isn't writing or messing around on the keys at open mics her passion for beer has led her to finding some of the most delicious breweries around the city. She can't wait to explore more and share her love for Colorado.
Tagged: artbeerbrewBrewerycommunityDarren Boydfive pointsjazzSpangalang Brewery