Backstage at the Phantom Circus 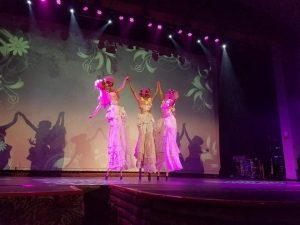 There’s a part of every wandering heart that wants to join the circus. A few of us actually do it; the rest of us write about it and while vainly wishing that we had better abs. Such wishing sucked up most of my Friday evening this week, what little was left after red wine with a girlfriend. The wish session happened after the bitch session and both were flights into escapism and delights of pondering fantasies. In particular, we pondered the abs we’d like to see and the abs we’d like to have. Circus performers tend to have terrific abs.

Denver is getting to be a great town for circus, with a plethora of options to see year-round. The specific troupe I saw this week was the Phantom Circus. I’d seen them once before, about a year ago, if I recall correctly, in a different venue. The fact that I’d enjoyed the show enough to return for another round speaks for itself. Of course, I enjoy circus and even dabble in the circus arts myself, but I still really only bother to repeat-watch things that are worth my time. I’ve never seen a second episode of SpongeBob SquarePants, for instance, or Pawn Stars.

Being a dabbler in the circus arts (or “the occult” as my mother calls them [insert massive exasperated-daughter eyeroll here]), I fall into a weird place between rabid fandom and unwarranted criticism. I love everything I see on stage: it’s amazing and beautiful and entertaining. I also find a perverse joy in seeing even tiny flaws in a stellar performance. It’s not that I can do better—in fact, quite the opposite is demonstrably true. But I feel slightly rewarded in having just enough skill to recognize where the attempt didn’t quite reach the achievement. And that does happen, in every live 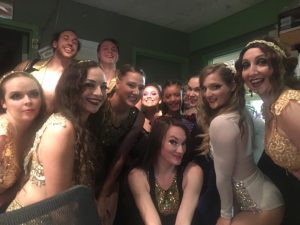 performance ever. Because this stuff is freakin’ hard to do. You try climbing into a trapeze, much less dancing around on one. The reason it looks easy is that the trapeze artist is an animal who has spent the last several years tearing the skin off their hands and mutilating their muscle fibers to bring you the delight of aerial athleticism. Even more than work and skill, it takes courage to make original art and put it out there. Ninety-nine percent of us never take that terrifying step. These folks did.

As a quick sidenote, I love the magic of seeing performers exit the venue, too. I’m shameless stage door doll. Seeing Katie Mesmerie walk out of the show with her trapeze tucked under her arm conjures up an entire world of mystery and adventure that she moves in and out of, between the circus and the mundane life of commuting back home. Also, I have a huge stage crush on her and I love watching her in any of her performances. I am not an unbiased reporter in this instance.

We in the performing arts have a saying: “It’s all magic to the muggles.” We also say “Merde!” We do and love circus because it *is* magic. Humans connecting to each other is magical and humans having fun is, too. The stage really comes alive when the audience and the performer make that human connection. If I have one critical point to make about Phantom, it’s that at a few points in the show, I didn’t feel like the performance was connecting to the audience. (I struggle with this as a performer, too, so no stones to throw.) In one specific instance, the act where the performers were supposed to be “backstage,” hanging out and “drinking,” didn’t really come alive until the final piece where the juggler showed that he actually was drinking actual beer while he juggled. The act suddenly became “real” in a way it hadn’t quite reached before and the audience suddenly animated. I also talked to the director after the show and was 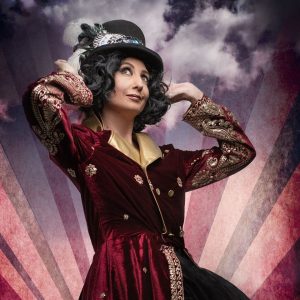 surprised to hear that the show included a theme. I had seen variety and skilled entertainment, but not a specific narrative arc. I’d like to see both the individual acts and the show as a whole have stronger narratives.

Getting back to my wishful thinking about abs… let’s objectify beautiful people. It’s fun to look at hot people’s bodies. If someone says that they don’t like doing that, then they’re lying to you. A big part of why we love entertainment (and why it’s a fantasy) is that we all adore beautiful people. (Show me a famous actress who isn’t lovely; I dare you.) The Phantom Circus granted me this bit of pleasure in that I saw a bunch of glorious butts all over stage. In particular, one of the female acrobats’ was enviable. People say that I have a nice ass, but I can’t compete with that. Of course, she earns it and I happily applaud her efforts and results. Also, let’s talk about the male performer’s guns. Women get most of the negative attention of objectification, so it’s my feminist duty to spread some of that around to the males of the species, too. If you can crack a walnut with your biceps, I want to see you in a tank top: the smaller, the better. And thank you for that.

The best parts of the show were what they almost always are: watching the performers having fun. Like the fun of watching little kids open Christmas presents, it’s wonderful to watch someone else be so deeply involved in enjoyment. Watching Staza Stone grinning through a hoop routine or the synchronized grace of the paired acrobats get into “the zone” is deliciously hypnotic.

And so, I’m started from a place of expecting a good show and I’m happy to say that I got one. I saw nifty performances of things that I absolutely cannot do, bridged by the gentle hosting patter of a Professor Phelyx Hopkins. All in all, well worth the price of admission. I believe the show I attended was sold out and tickets are likely moving quickly for the next one; get yours while you can!

Jessie Hanson
Jessie Hanson lives and works in Denver and couldn't be happier about it. Like the best-possible kind of Jekyl-and-Hyde scenario, she splits her life between science and storytelling. During the day, she performs clinical diagnostics and messes around with test tubes. At night, she performs behind the mic as a standup comedienne, in the air as a circus aerialist, and in rhinestones as burlesque dancer. She begrudges the hyper-inflated cost of a decent pair of false eyelashes. When she's not on stage, she sweating it out as an endurance athlete in triathlons and marathons across the West. She begrudges the hyper-inflated cost of a decent pair of running shoes. She's thrilled to be on board with OnDenver and writing about science, comedy, circus, athletics, and general fun on the Front Range!
Tagged: acrobataerialCircusdancePhantom