5 Reasons the NFL Should Allow Cannabis 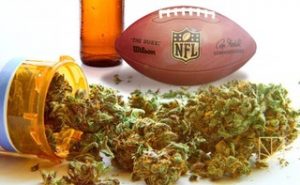 The NFL and cannabis has been a hot topic for some time now. With the recent news of the NFL denying a player’s request to use cannabis as medicine, it only seems right we look at five quick reasons the NFL should allow cannabis. The request was made by Mike James, who is a running back for the Tampa Bay Buccaneers. James is the very first active player to formally ask to be exempt from the NFL’s no cannabis policy. He put in the request for exemption to treat the number one reason on our list.

Our number one reason cannabis should be allowed in the NFL is to treat chronic pain. NFL players put a lot of wear and tear on their bodies. Between training, playing games, and dealing with injuries, NFL players are under a lot of physical stress. Cannabis is a natural pain reliever.

Cannabis has been shown to have neuroprotective properties. This means it actually protects brain cells and supports overall healthy brain functioning. Since football is such a high contact sport, concussions are very common. Conditions like CTE, and other repetitive traumatic brain injuries are starting to be discovered more often. Cannabis can help as both a preventative and treatment option for players.

Opioids are the most commonly prescribed pain killer in the NFL. Players in the NFL are also much more likely to become addicted to opioids than the rest of the population. Several players who leave the NFL have reported their struggles with opioids even after playing. Opioids may help with pain, but they also damage your organs along with a long list of other dangerous side effects. Cannabis is a safe, natural alternative to replace opioids.

Cannabis has a calming effect on the central nervous system. This allows the body to enter into a state of recovery quicker, which promotes better healing. After competing in a game in front of thousands of screaming fans, lights, and cameras, it can be hard to settle down. Allowing NFL players to consume cannabis would give them a natural way to calm their nerves after a game and begin the healing process.

These are just five reasons the NFL should allow cannabis, but the list could go on further. There are a seemingly endless number of reasons that cannabis should be allowed in the NFL, and all professional sports. If the NFL really cares about the health and wellness of the players, then things need to change, and cannabis needs to be allowed as a medicine.

Antonio DeRose
Antonio is the Co-Founder and COO of Green House Healthy, a health and wellness company promoting cannabis as part of a healthy and active lifestyle. He is a NASM Certified Personal Trainer, competitive trail runner, freelance writer and speaker. His company creates healthy experiences through educational and athletic events, teaching cannabis positive fitness and nutrition classes, and providing promotion and media services. Antonio has several years of experience with cannabis, including having worked on an all organic outdoor farm with 6000 plants, from seed to sale. In 2017, he became the first male to complete an entire 420 Games National Tour, a traveling athletic event series focused on de-stigmatizing the lazy stoner stereotype. He is also an official NORML Athlete, representing NORML Athletics.
Tagged: #CBDathleteathletesbraintraumabuccaneerscannabiscannabisandfootballchangecteESPNfootballhealthhealthychoiceshempMarijuanaNFLnflbanrunningbacksportstampabayTHCWeedwellness