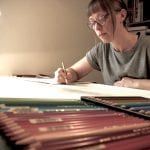 Tonia was born and raised in Illinois, and now lives in Denver with her husband and two young sons. She received her BFA from Illinois State University in 2001, and earned her MFA in Printmaking from University of Alberta in Canada in 2005, where she began creating images through the repetition of a simple mark. She exhibits her work nationally and internationally. She has been an artist in residence at Anderson Ranch in Snowmass Village, Colorado, and Women’s Studio Workshop in upstate New York. In 2010, she spoke on the panel Printmaking and the Mundane at the College Art Association conference... Read More