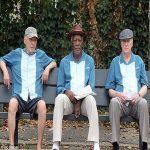 As obnoxious as Hollywood can get with its youth obsession, it’s nice when our elders get some love. Ordinarily, when older folks show up in a film, they’re either a wise mentor, a villain, or a wise mentor that becomes a villain. That doesn’t give them a whole lot of colors on the palette to play with. Luckily, Hollywood remembers occasionally that not everybody wants to watch a Marvel movie, and not every filmgoer is a white male aged 18-25. Hence, the Old People Doing Things sub-genre, or OPDT*, where a group of graybeards has some kind of an inciting incident in the twilight... Read More

Actually, This Is Rocket Science

In today’s America, the easiest thing in the world is to be a straight, white male. I don’t mean that us white guys get our pick of great jobs and get handed sacks of money. Instead, we have a base level of presumed competency. If we say to society that we want to become an author, or an astronomer, or a professional soccer player, the response is something like, “As long as you work hard, you can make that happen.” But try being a black woman in America. Try dealing with the one-two punch of racism and sexism. For example, on an early Delta airlines flight from Detroit... Read More