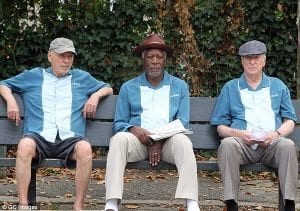 As obnoxious as Hollywood can get with its youth obsession, it’s nice when our elders get some love. Ordinarily, when older folks show up in a film, they’re either a wise mentor, a villain, or a wise mentor that becomes a villain. That doesn’t give them a whole lot of colors on the palette to play with.

Luckily, Hollywood remembers occasionally that not everybody wants to watch a Marvel movie, and not every filmgoer is a white male aged 18-25. Hence, the Old People Doing Things sub-genre, or OPDT*, where a group of graybeards has some kind of an inciting incident in the twilight of their lives. They decide to do a thing to either recapture their youth or appreciate the time they have left.

OPDT movies tend to look and feel about the same. One character has an adult child that’s a pain in the ass, another character is a horndog. There are often jokes about incontinence. Usually, there’s a scene where a younger character scoffs at the protagonists, and they band together to exact retribution.  The humor is very broad, the music is inoffensive, and a character will usually sing or dance at some point.

That’s how you get movies about old boxers (Grudge Match), old astronauts (Space Cowboys), old people becoming young (Cocoon), and old men having a bachelor party (Last Vegas). Unless we get into a Logan’s Run situation, there will always be old people and always a need for OPDT movies. Going in Style absolutely fits into the genre and despite me not being the particular target audience, it was entirely fine.

We meet Willie (Morgan Freeman), Joe (Michael Caine), and Albert (Alan Arkin), three retirees who have settled into a somewhat comfortable rut. They’re all collecting pensions from a steel company, and they spend their days playing bocce ball, hanging out at a diner and drinking lousy coffee, and mingling with buddies at the local senior center. All is not perfect, however, when Joe discovers his bank has screwed him over on his mortgage, and his payments are tripling by 300%.

Things get worse. Willie’s health is failing, and he’s in desperate need of a new kidney. Albert is a former jazz saxophonist, and he’s barely making ends meet by providing music lessons. The guys need money with a quickness. It seems that all is lost when their former employer shuts down and their pensions are phased out. But, in a shockingly convenient turn of events, the very same bank that Joe uses also happens to control the pension fund.

Inspiration strikes while Joe is at his bank negotiating his mortgage. A team of daring robbers strike the bank and clean the place out. How hard can it be to successfully rob a bank, anyway? Joe seems to think it’ll be a snap, and convinces his pals that they can pull off their own heist. They’ll keep exactly the amount of money owed for their pensions, then donate the rest. Joe can keep his house, Willie can get a new kidney, and Albert can romance the flirty Annie (Ann-Margret). All they need to do is get away with it.

Movies are products of their times, and Going with Style is no different. Matter of fact, it’s a remake. The original, made in 1979, starred George Burns, Art Carney, and Lee Strasberg. While both films are about a trio of elderly lifelong pals who decide to knock over a bank, that’s where the similarities end. In the original, the guys did it for fun. They were tired of doing the same things day in and day out, and they wanted to recapture their youth once more. Martin Brest directed, and he took his time getting to know the characters.

The 2017 version is also of its time, and now our heroes are tired of being crushed by multinational corporations. They want what’s theirs, and if the system won’t do the right thing, then they’ll go outside the system. It’s thematically similar to films like The Big Short and Hell or High Water, but while those films had a righteous anger, Going in Style is too busy having fun to get pissed off.

Director Zach Braff’s** remake is bigger and broader than the original. From the very beginning, he’s made a movie that’s relentlessly perky, with lots of up-tempo tunes, wacky supporting characters, and breezy pacing. It runs entirely on the charm of Freeman, Caine, and Arkin, and it seems precisely engineered to be a pleasant and nice time out at the movies. Don’t get me wrong, there’s a lot to be said for making a movie that just wants to send the audience out smiling. I’ll give it this, at 96 minutes, the film doesn’t wear out its welcome at all.

The script by Theodore Melfi is a cut above your usual example of an OPDT movie. I’d expect so since he wrote and directed the enormously entertaining Hidden Figures. He takes pains to make his characters relatable and likable. Melfi seems as if he wants to make Baymax movies. To explain, Baymax was the inflatable robot in Big Hero Six. He was soft, totally non-threatening, and utterly charming. Melfi writes scripts that never get too heavy, too tense. They bop along and are designed to keep your heart rate down. Plus, I take my hat off to him for his discipline in avoiding lame jokes about Viagra or how the guys are baffled by modern technology.

Ultimately, the success or failure of this kind of movie depends on the leads. They need to be likable and have strong chemistry. Considering that Caine, Freeman, and Arkin are not only all Oscar winners but have also been honing these particular personas for decades, they have that covered. They all have the experience to know what to do, when to do it, and when to go big or go subtle. Even the scenes of them hanging out in the diner and bantering with their regular waitress Mitzi (Siobhan Fallon), or verbally sparring with their cadaverous friend Milton (Christopher Lloyd) are entertaining if only to see a group of pros work.

Having said all that, I didn’t particularly care for it. Don’t let that scare you off! In this instance, I’m the outlier, and I was after something that was a little deeper, a little more jagged and edgy. The crowd that was around me just adored Going in Style, and there were plenty of laughs and smiles to be had. If you saw the preview or read this and thought, “That’s just the thing for a nice night out,” it will be.

*This is not to be confused with the Learning A Lesson Late in Life genre (LALLIL), where an old person reconciles with someone from their past, comes out, stops being a racist, or makes friends with a robot.

Tim Brennan
Tim has been alarmingly enthusiastic about movies ever since childhood. He grew up in Boulder and, foolishly, left Colorado to study Communications in Washington State. Making matters worse, he moved to Connecticut after meeting his too-good-for-him wife. Drawn by the Rockies and a mild climate, he triumphantly returned and settled down back in Boulder County. He's written numerous screenplays, loves hiking, and embarrassed himself in front of Samuel L. Jackson. True story.
Tagged: alan arkinann-margretchristopher lloydgoing in stylematt dillonmichael cainemorgan freemansiobhan fallontheodore melfizach braff