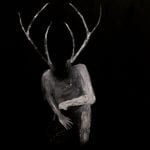 Nicholas Emery was born in the West Indies to American parents, and lived in the countries where his father was stationed: the Caribbean, Middle Eastern, and European regions. He eventually found his way to Colorado as a young adult in 1987. In 2005 he returned to his birthplace, the city of Port of Spain, Trinidad where he lived and worked  for ten years in construction, and as a painter. In 2016 he came back to the U.S. and began studying at Vermont College of Fine Arts, where he earned an MFA. He now has a studio in Denver and a home in Nederland, Colorado. His work is about nature, industry,... Read More