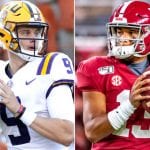 In a battle against the Cleveland Browns two weeks ago, the Denver Broncos (3-6) won the game but lost ground in the race to secure a top pick in next year’s NFL Draft.  But with a rookie quarterback and facing a difficult remaining schedule, look for Denver to battle it out with the Miami Dolphins, Cincinnati Bengals, and others at the bottom of the league for the potential top prize. Whether Denver goes winless the rest of the season and manages to secure the top pick or wins a game or two and finishes with a top-ten selection, here is how Denver’s draft will go, no matter where they land. First... Read More