Speak Your Truth – Never Settle, Stay True to Yourself, and Thrive

Since I moved into my Airstream, I hang out daily at Whole Foods (eating the salad bar and borrowing precious Wi-Fi). As a self-proclaimed blogger (I don’t know how many blogs it takes to clearly own that title), I like to spend most of the time writing. I find that it’s ironically easy for me to focus amongst the lunch crowd chaos.

Today, I painfully watched a couple with two kids absolutely annihilate one another with their words. In public. And, my heart was so soft to their experience that I literally wanted to cry.

The wife is pushing the two kids in one of those car-shaped shopping carts and accidentally runs into a pole because the outdoor tables at Whole Foods are so tightly packed together. No one is crying. No one is hurt. Nothing is broken. The husband goes to move one of the tables out of her way as she screams under her breath, “There’s a novel idea! Maybe you could move a damn chair?! Maybe you could actually help for once?!” She then goes on a tirade that this is all his fault, that his presence is a distraction, and he mocks her every word by throwing around vocabulary words like “patriarchy.” As he walks away to get cups for the kids’ juices, she mumbles something under her breath and then proceeds to yell, “Do you ever even listen to me?!” He does not turn around. He doesn’t break stride. I know that he is walking to the cadence of his life song.

He comes back, cups in hand, which she viciously rips away from him. He throws around some more vocabulary about needing respect as the man of the house, and she proceeds to knock him down. They eat. At first, in silence. Never even making eye contact. The kids suck down their juices, and while they give off an air of obliviousness, I know better. They are not stupid. They know. Or, they will know. Because this encounter at Whole Foods is not the first bashing. And, if I know anything about this vicious cycle, it will not be the last.

The little girl starts screaming. Blackberry juice is running down her chin. The mom attempts to keep her daughter’s clothes clean. The dad is telling his wife to handle the situation differently. The wife is saying that she always does it this way before blurting out, “Can you be quiet, please, and stop with the talking that’s unnecessary?! If someone asks you a question, then you answer it. If not, shut up.” Shut. Up.

The kids remove themselves from the table. The boy is climbing on the shopping cart. The mom mumbles, “That’s unsafe.” But, she is gone. Her eyes are watering as she sucks down her iced coffee. The husband throws away the trash, and she is beckoning to escape into that same nothingness. But, she cannot escape. Little lives are demanding her presence. So, she slowly eats the leftover blackberries from her daughter’s plate and loses herself into the safety of her cell phone. The husband answers a business call and uses his free hand to hold the cart that his son is climbing on like a McDonald’s jungle gym.

Maybe I am most touched by this moment because I feel like I am watching what, could very well have been, an enactment from the future of my previous life. Maybe this is normal. Maybe his condescending comments and the hunch of her shoulders as she spits fire at his spirit are nothing more than ordinary. Maybe I am being too sensitive. Maybe I am listening too closely from just one table away with my headphones in and my fingers clacking on my keyboard. 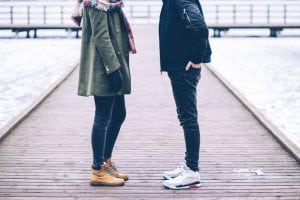 Then, I know that I am doing it again.

I am silencing myself. I am justifying this behavior because I don’t want to feel uncomfortable. I am uncomfortable. Everyone around us is uncomfortable. And, they, they are the most uncomfortable. But, this is their normal. I know it. And, I want to hug her. I want to tell them to be thankful for each other. I want to write their kids a letter to their future selves that reads, “I don’t know if your parents made it, but please, don’t ever settle.”

And, maybe I’m assuming too much. Maybe this isn’t their normal. Maybe they lost their dog yesterday. Or, maybe the wife was up sick all night. Or, maybe, just maybe the husband lost a major account last week and might get fired from his job. Maybe it’s just not their day.

But, I’m doing it again.

Because, I know. When she screamed, “Do you ever even listen to me?!” she is not talking about the juice cups. She is talking about that time five years ago when she wanted to go to Mexico for a vacation and he booked the trip to North Carolina without asking her opinion. She is talking about yesterday when she told him to put his dishes in the dishwasher for what was probably the 432nd time, knowing that he will never do it. And, when he mentioned a “patriarchy,” he is not talking about being respected in the Whole Foods outdoor seating area. He is talking about never feeling appreciated for working 11-hour days so that she could stay home with the kids and still afford the nice clothes and the pretty hair without ever having to do so much as lift a finger to balance a checkbook. He is talking about wanting respect for showing up every day, for coming home to her and the kids when he would rather be going to happy hour with all the single guys from the office.

My heart is heavy. Because I can remember being married to someone with whom I would engage in such public spectacles. A big reason I didn’t drink for a long time is because I felt the burden to stay sober, to keep my breath, to retain some sense of respectable public behavior. My sobriety was the antidote to his alcoholism, and while I know that it provided some significant relief to what would have been some outrageous word wars (based on the knowledge that he has since been arrested for domestic violence with the woman with whom he had an affair and then married), I was putting a Band-Aid on a wound that begged for a tourniquet. And, I can remember my own cries for help that sounded all too similar to “Do you ever listen to me?!” in the middle of a public forum. Because, if he wouldn’t listen to me, then maybe, just maybe, someone in the room would listen.

What I’ve learned since leaving this toxicity is that it was my lack of understanding myself that bred within me an inconsistent control of my words. I could not speak my truth in times of peace, so I acted immaturely in times of pain to overcompensate for this deep void in my life. I now realize how important it is to use my words to express my feelings and my needs in a non-emotional state, to not shy away from those words because I fear that the person who hears them will be uncomfortable, that their discomfort will then cause them to change their opinions of me. At the end of the day, I only want to surround myself with people who can hear my truth, really hear it, and if it causes any level of discomfort, then we can conversate about it on an equal plane. I refuse to silence my truth; I refuse to surrender my being.

In the same breath, I refuse to cut down the one person who I will pledge to protect for the sake of my own selfish desires. Because, I know that I will not settle for anyone who does not hold the same standard. The most gut-wrenching question that circulates among my circle of friends is whether or not love really exists – if there can be authentic happiness between two people in a marriage. Unfortunately, I think we are confronted too often with people who are merely surviving their relationships.

Despite everything, I have not lost faith that the right person will love my voice, and I must hold steadfast to the belief that two people, doing the same work, will do more than just survive. They will thrive.

Stephanie Kemp
Stephanie is a road warrior, adventure seeker, and brand builder. She grew up in the mountains of Colorado and after spending nearly a decade between the PNW and the east coast, she’s proud to once again be calling Colorado home. Well, home for now. Stephanie recently bought an Airstream with the intention of living a more minimalistic and nomadic lifestyle. After logging over 20k miles in her car last year, chasing rock faces in the summer and powder days in the winter, she realized that life could be a hell of a lot simpler if she could carry her house with her on these adventures. In 2017, she started her own marketing agency, Sleigh Creative, to take control of her freedom. As a freelance creative director and brand strategist, she spends a lot of days playing and even more nights working. In all things, be it work or play, she seeks to inspire people to the life of never settling. You can follow along with her journey on Instagram, @by.stephanieleigh, and through her self-titled personal blog.
Tagged: Airstreamdomestic violencefamilyhappinesslasting loveMaybe…never settlesilencethe pastThey will thrivewhole foods