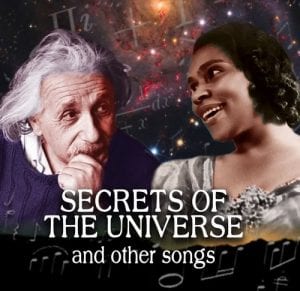 There’s a deep vein of eroticism that ties together Marc Acito’s new play that’s running at the Aurora Fox Arts Center. None of the characters actually have sex during the (inter)course of the play, but if you define “eroticism” as “the energy of creativity and connection,” then all of the characters are neck-deep in it. The story told on stage is the true-but-little-known episode of 1930’s American history where Albert Einstein (yes, *the* Einstein) hosts famed vocalist Marian Anderson in his home because hotels were unwilling to offer lodging to African-Americans. Supporting the storyline are the minor characters of Anderson’s accompanist (itself an intimate relationship), a gay Pole named Kosti Vehanen (Mark Rubald), and Einstein’s housekeeper Helen (Sharon Kay White), a stolid German refugee. In their own way, all of these characters demonstrate Acito’s trademark exploration of marginalized or “othered” people struggling to be whole, safe, and seen by the world. It’s an interesting scenario, interesting characters, and an interesting dive into the story. 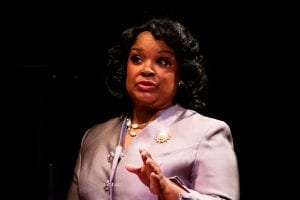 Jordan Leigh is almost unrecognizable underneath layers of wigs and makeup as the great physicist and plays him as a bubbly jokester, always playing with a quip or a pun. Mary Louise Lee shimmers as Marian Anderson, with a voice as silvery as her gowns. (Full disclosure: I have met Ms. Lee a few times backstage when we have performed in the same nightclubs. I am sure that she does not remember me). The two have an immediate connection as masters of their artforms. As they banter and quip, slowly diving deeper into their friendship, they recognize the similarities between what they do. Both work in the theory (mathematical or practical) of space (outer galaxies or nasopharyngeal cavities) and the vibrations of the song of the universe. Both use their disciplines to create and connect; both are sensual and deeply erotic people. Both are also folks who have experienced imminent threat and danger because of their immutable selves. Einstein fled Nazi Germany, while Anderson was black during the era of Jim Crow and public lynchings. Their bond is strengthened by their deep intelligence and their respective experiences of racism in its varying forms. The bonds between the characters also extend beyond the primary two. Einstein takes an interest in the love life of the accompanist. Anderson and the housekeeper establish their own warm interactions. 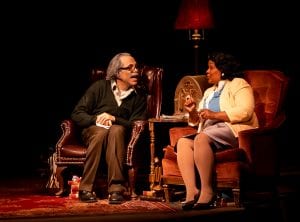 Acito is not just a playwright, but also a librettist, and the piece reflects that. Lee sings gorgeously to the live accompaniment of Andrew Fischer on the Steinway grand. (Fischer plays another half-dozen roles throughout the performance, as well). Leigh and the rest of the cast also lift up their voices and the choral bits are lovely to hear. We rarely get a full song, though. This is not a musical; the songs are not full-length. The effect is more the fleeting emotions that flash through us but quickened to life by music. Although the music (a combination of Anderson’s own collection, African American spirituals, and more) is gorgeous, I wanted more. I wanted whole songs and not just snippets.

Another bit that slipped for me was the flashbacks, for lack of a better word. When Einstein and Anderson were interacting in the present, Anderson seemed to experience flashes to other times and places, mostly involving Franklin and Eleanor Roosevelt and her grandfather, an enslaved man who escaped to freedom. While FDR and Eleanor Roosevelt, as well as refugees from slavery, are fascinating characters, their presence on stage was a bit confusing. Chekhov’s Gun requires the fulfillment of potential after its introduction. Bringing these characters into the story felt like giving them a lot of potential, but not enough time or attention to justify them. In fact, I sometimes wondered if *any* of the minor characters were necessary to the play. The lion’s share of the energy and interest in the whole production is the relationship between Einstein and Anderson. Since the depth of the other characters was not delved into, they ended up supernumerary, using time and space that left less for the main characters and generally complicating the narrative and visual pictures. I never understood what the Roosevelts were doing there at all. I could see a tighter iteration of this piece with just Einstein and Anderson—no supporting characters present on stage, no flashbacks. 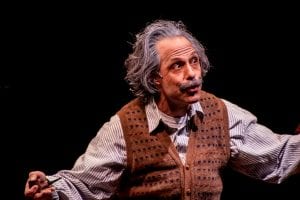 The two main characters have an interesting through line on the subject of non-monogamy. Einstein vigorously embraced the practice and encouraged Anderson to do the same. Anderson hesitated on it. There’s something to unpack here about the varying power levels of these two people, even though their primary bond is that of marginalization. Einstein, being white (although Jewish) and male, feels completely secure in violating sexual norms; he doesn’t have to consider what other people think. It’s no threat to his position to have an “aberrant” sex life. Anderson has to consider how such an arrangement would tarnish her reputation–she’s a black woman who makes her living by being “acceptable” enough for conventional folks to buy a ticket to hear and therefore has a higher risk level. The appeal to our more primal natures is universal to us all (who doesn’t like the idea of lots of free sex with no consequences?!), but our abilities to exploit such opportunities are vastly different in accordance with our social statuses. As Anderson quoted, “Free love is frequently neither.” 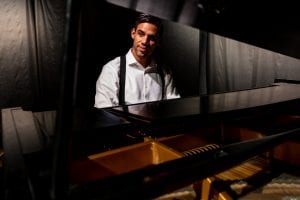 Secrets of the Universe and Other Songs plays at the Fox until March 15. Tickets are available now. The story of these American legends is well worth seeing, hearing, and enjoying, in all of its sensory and sensual pleasures.

Jessie Hanson
Jessie Hanson lives and works in Denver and couldn't be happier about it. Like the best-possible kind of Jekyl-and-Hyde scenario, she splits her life between science and storytelling. During the day, she performs clinical diagnostics and messes around with test tubes. At night, she performs behind the mic as a standup comedienne, in the air as a circus aerialist, and in rhinestones as burlesque dancer. She begrudges the hyper-inflated cost of a decent pair of false eyelashes. When she's not on stage, she sweating it out as an endurance athlete in triathlons and marathons across the West. She begrudges the hyper-inflated cost of a decent pair of running shoes. She's thrilled to be on board with OnDenver and writing about science, comedy, circus, athletics, and general fun on the Front Range!
Tagged: Einsteinfoxhistorymusicmusicalphysicsscience