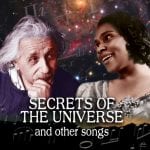 There’s a deep vein of eroticism that ties together Marc Acito’s new play that’s running at the Aurora Fox Arts Center. None of the characters actually have sex during the (inter)course of the play, but if you define “eroticism” as “the energy of creativity and connection,” then all of the characters are neck-deep in it. The story told on stage is the true-but-little-known episode of 1930’s American history where Albert Einstein (yes, *the* Einstein) hosts famed vocalist Marian Anderson in his home because hotels were unwilling to offer lodging to African-Americans. Supporting the... Read More