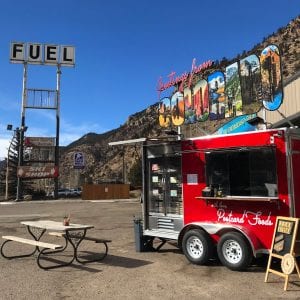 My New Year’s Resolution for 2019 was “Stick to a Meal-Planning Regimen.” If you Google this idea, you get all the kitchen-blogger schtick about how preparing meals in advance saves you time and money, helps you lose weight, yadda yadda yadda. These things are both completely true and exceptionally boring. I wasn’t trying to save time or lose weight. I was going through a deeply difficult period and I was struggling to do things as basic as feed myself. I would make meals ahead of time and then I would require myself to actually sit down to eat them and say the out loud the words, “Someone loves me enough to make this meal for me.” Even if that someone was me, especially because that someone was me, the love and care that is good food gradually helped me through.

I’ve stayed on the meal-planning regimen ever since because it really does help to eat good food in the midst of a hyper-busy modern existence. Having a hot, tasty, comforting meal close at hand improves your quality of life enormously. Frozen “dinners” from the grocery store are generally too small, as well as nutritionally terrifying and gustatorily unpleasant. I was happy to try another option this week from Postcard Foods, a local Denver business that supplies hot meals and frozen options-to-go from their proprietarily charming bright-red food truck. 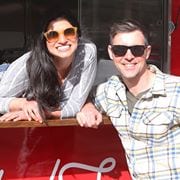 Postcard Foods is run by the wife-and-husband team Bridget Bagel (yes, her real name) and Jim Abraham. It got started when she prepped meals for the both of them so that they could eat together over video chat when they were long-distance dating. If these two didn’t seem so genuinely enchanted with each other, my profoundly single self might find this to be despicably adorable, but I’ll give them a pass on it. Their long-distance affection and connection morphed into their current business, wherein you either get hot food directly from their food truck or you can pick up an oven-safe, compostable tray of professionally-home-cooked food that doubles as a shortcut to self-care. I tried it out this week with three of their offerings, each named for a region of the world I’d like to visit: D.F. Chicken Enchiladas, Liguria Pesto Polenta, and Chang Mai Tofu Yellow Curry.

I got the frozen trays home and read the instructions. In the conventional oven or the microwave, they basically said, “Cook until it’s nice and hot.” I chose the oven because the inherent vice of pre-made foods, no matter the source, is a lack of crunch and I hoped that the oven would help remedy that. You can cook these from frozen or from thawed, which is a nice touch if you’re packing them for a skiing or camping weekend and the ice conditions in your cooler are variable. The trays went in at 350 degrees and in a few minutes, I noticed a smell of “hot paper.” I was a little concerned that the tray might ignite, but it definitely did not, and it didn’t emit any smoke or anything.

It took two episodes of Norsemen on Netflix, or about 45 minutes, to reach an internal temp of 200 degrees (last few minutes with the lid of the tray removed and I used a kitchen thermometer, but you could also just watch for bubbling in the center of the food). I spent the last couple minutes of oven-time reading the ingredient list for each entree. They averaged 19 items if you count each spice (marjoram, basil, oregano, salt, etc.) separately, and included such mysterious ingredients as “mushrooms” and “avocado oil.” As a quick comparison, I looked up the Hungry-Man frozen dinners website. Their enchiladas contain upwards of 45 ingredients and such delicacies as “Yellow #6” and “hydrogenated beef fat.” But, I was reassured by Hungry-Man copywriter, “the BHT improves stability.” I am sure I will be relieved to know that, once I find out what BHT is. I plated out the Postcard polenta and enchiladas, cracked open a snobby local beer, and tucked in. 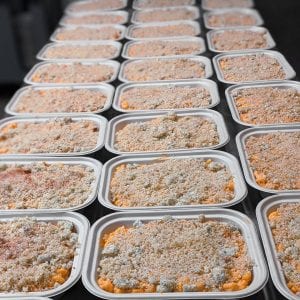 For reference, I spent the majority of the month of June doggedly chewing my way through a deeply unsuccessful set of meals that I had totally messed up in cooking but was reluctant to throw away for reasons of pandemic thriftiness. It was twenty servings of ugly and unpalatable. I made it through 18 before my nerve ran out and I tossed the last two. The Postcard Foods meals were the Platonic-ideal of the opposite of my June purgatory. The polenta was bright, savory, and robust, full of large pieces of mushroom. My dinner companion, who is not any kind of flavor-sensitive gourmand, called out the discernable presence of multiple, distinct cheeses. In his words, “Eating this at the end of a long ski day would be…amazing.” The enchiladas equally held their own. The tortillas managed to be crisp on top (thanks, conventional oven!) and had a surprising bite of chili-heat inside. I maxed out, sated, after the polenta and one enchilada. My companion returned happily for seconds on both and at least two more meals of leftovers remained in the trays. The tofu curry also portioned out into four generous meals (I added some rice as a substrate), which I consumed in the breakroom at work, to the envy of my coworkers and their vending-machine lunches. 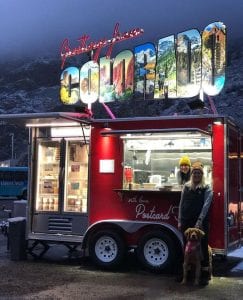 After 1.5 years of consistently preparing my meals ahead of time, I’ve run into a set of challenges and I can see how anyone who’s doing similar work, including Postcard Foods,  would do the same. Texture, particularly crispiness/crunchiness, is really, really hard to capture in pre-made meals, from my kitchen or a professional one. It just doesn’t happen without undergoing massive and nutrition-depleting engineering. Cheetos crunch and the lasagna your mom sends home with you after a visit doesn’t; there are reasons for both of these facts.  I also don’t make “challenging” entrees. I make things that I will eat multiple times in a row, with no surprises (see: June’s failure). Postcard Foods supersedes these far better than I honestly expected from takeout/frozen entrees. Their enchiladas had a crunchy tortilla and their fifteen menu items far outreach my half-dozen go-to dishes.

Here’s the takeaway message (“to-go” message?): I really enjoyed eating this food. It was hot, tasty, familiar, interesting. These entrees felt like a big, homemade hug that happened to also taste really good. Eating it made me want to say out loud, “Someone loves me enough to make this meal for me.”

If you want a big polenta/enchilada/homemade soup hug of your own, the Postcard truck isois for pickup on Fridays, Saturdays, and Sundays at 1041 Co Rd 308, Dumont, CO 80436, which is 7 miles west of Idaho Springs off of exit 234, under the FUEL sign. You can also order online for free delivery. Either way, use the code <OnDenver> for a special OnDenver readership discount (buy three non-soup meals and get the fourth for free) until the end of July 2020! But only do that if, you know, you like good food.

Jessie Hanson
Jessie Hanson lives and works in Denver and couldn't be happier about it. Like the best-possible kind of Jekyl-and-Hyde scenario, she splits her life between science and storytelling. During the day, she performs clinical diagnostics and messes around with test tubes. At night, she performs behind the mic as a standup comedienne, in the air as a circus aerialist, and in rhinestones as burlesque dancer. She begrudges the hyper-inflated cost of a decent pair of false eyelashes. When she's not on stage, she sweating it out as an endurance athlete in triathlons and marathons across the West. She begrudges the hyper-inflated cost of a decent pair of running shoes. She's thrilled to be on board with OnDenver and writing about science, comedy, circus, athletics, and general fun on the Front Range!
Tagged: campingCOVIDfoodmountainsskito-go