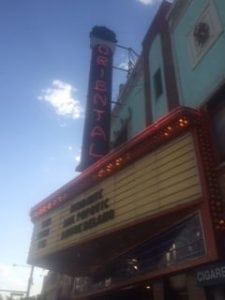 Welcome back to the Backstage series on science communication! If seeing the Science Riot show last week (which I assume you did!) got your nerd juices flowing and you just want more, you’re still in luck! Nerd Nite is the next Denver science communication specialty on offer. If you like science, trivia, esoterica of all sorts, Nerd Nite is for you. If you like all of the preceding items AND have trained your liver to tolerate large quantities of alcohol, Nerd Nite is so very definitely for you.

Nerd Nite is not endemic to Denver—in fact, it started in Seattle and spread here like a virus, but that doesn’t stop me from claiming that Denver does it really well. It’s not as focused as Science Riot on science or on comedy, per se. It’s just pure, undiluted nerdism. The program offers anybody a chance to get up and talk in-depth about their favorite topic in an “inebriated, salacious, yet deeply academic” atmosphere. Geeks being who we are, many of the talks end up being 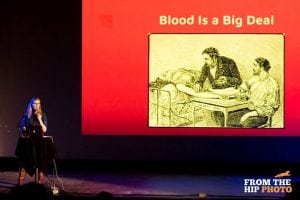 technical and scientific in nature, but they can be broadly variant. You can talk about root canals or canals on Mars or how you assembled your precious deck of Magic the Gathering cards. You get the boozy attention of several hundred people who are just as irredeemably awkward as you are. It’s splendid.

The great advantage of Nerd Nite is that you get visuals and, I am not making this up, they let you prepare a PowerPoint Yes! Nerds, rejoice with me! We get to make slides decks and expose them to willing victims who have paid to see us make a photo of the Antarctic supercolony of Adelie penguins bounce onto the screen! They actually let us do this!

The format for the evening is as follows: You arrive a bit early at the venue and have a drink. Then you find your seat in the cavernous bowels of an antique theater with the friendly ghosts of a thousand performances lingering inside. It’s beautifully cool in the heat of a Denver summer. Have another drink. 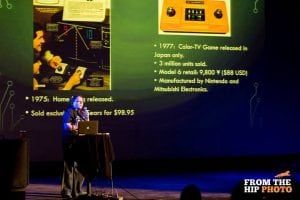 After this, the presentations start. Each Nerd has about 20 minutes to tell you all about their favorite topic. For the purposes of this column, let’s name this topic “The Feminist History of Bicycles.” You sip your gin-and-tonic while hearing how the “safety bicycle” gave women the opportunity to go places unchaperoned and thus pave the way for suffrage and, you know, regular human rights. You have another gin-and-tonic now to celebrate that achievement. Next, you hear all about

the “Themes of Capes and Costumes in Comics” and after that “Flamenco: the King of Dances.” After each presentation, there are a few minutes for open questions. Be sure to stay just sober enough to participate because you are going to have questions about utility capes and the advantages of a 12-string guitar. After all this, you call a Lyft and get home to dream about a Gypsy King dancing flamenco in your garage with a vintage Schwinn. All in all, a lovely evening.

I had the good fortune to present at a Nerd Nite a few months ago and had a blast! Novice public speakers

might find presenting on stage to be intimidating. The alcohol helps a lot. I can say, as a scientist, that the presence of a likkered-up audience boosts your public speaking skills by a minimum of 40%. Moreover, the good folks drinking in the audience are probably just as hopelessly geeky as you are and therefore secretly admiring your courage to talk out loud in front of the 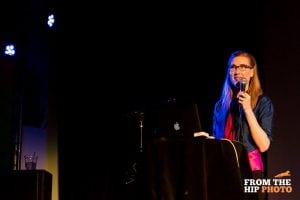 one person in the second row who definitely might turn out to be hot when the turn the lights back on. The alcohol won’t stop you from sweating, but nothing is perfect.

The next Nerd Nite show happens on July 25 and you don’t want to be the only one who misses out. I highly recommend you put on your Coke-bottle glasses and fire up your dial-up to get tickets just as soon as they drop. To be sure you don’t miss out, you can sign up for an email notice! I’ve had a sneak-peek at the lineup for the next show and it’s going to be terrific. Be there. Be square.

Jessie Hanson
Jessie Hanson lives and works in Denver and couldn't be happier about it. Like the best-possible kind of Jekyl-and-Hyde scenario, she splits her life between science and storytelling. During the day, she performs clinical diagnostics and messes around with test tubes. At night, she performs behind the mic as a standup comedienne, in the air as a circus aerialist, and in rhinestones as burlesque dancer. She begrudges the hyper-inflated cost of a decent pair of false eyelashes. When she's not on stage, she sweating it out as an endurance athlete in triathlons and marathons across the West. She begrudges the hyper-inflated cost of a decent pair of running shoes. She's thrilled to be on board with OnDenver and writing about science, comedy, circus, athletics, and general fun on the Front Range!
Tagged: comedycommunicationnerdNerd NiteOriental Theaterscience