Home » Blog » Sports » Mike MacIntyre – Change is in the Air: 6 Reasons Why It Was A Mistake To Let Him Go 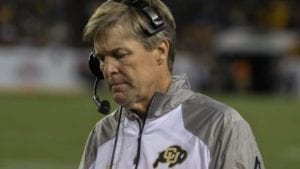 The whispers began after the Colorado Buffaloes fell apart in the Oregon State game.  Those same whispers turned to shouts after the Buffs dropped their sixth game in a row, after a 30-7 drubbing by 19th ranked Utah at Folsom Field. Coach Mike MacIntyre was officially let go over the weekend, despite having one game left to possibly save the season.  While it is that time of year in which teams like Kansas go after a Les Miles, and USC ponders the future of Clay Helton, letting go of MacIntyre was premature at best, and here are six reasons why. 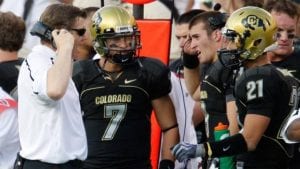 Should we be upset at the Buffs dropping six in a row and potentially failing to make a bowl game after such a promising start? Yes.  Should we have a better coach, better recruiting, and more wins considering our history, our facilities, and our support of the program? Yes. But do the Buffs have a plan B that doesn’t include some cheap, random Assistant Coach from Southwestern Missouri State? I sure hope so.

Alan Tapley
Alan Tapley is an educator, author, and blogger who has lived just outside of Boulder for the last twenty years.  His published work includes two novels, two children’s books, a series of cartoons in the Minneapolis Star-Tribune, and multiple sports related articles. His love for family and the state of Colorado is only matched by one thing, his passion for sports.  The first baseball game he ever attended was at Wrigley Field, before there were lights.  At the final Bronco game at the old Mile High, he allegedly cut out a piece of his seat in the South stands.  But regardless of being here for the Avalanche’s last Stanley Cup, the Rockies only World Series appearance, and all the Broncos’ Super Bowl Victories, his wife never fails to remind him that he wasn’t at the University of Colorado in 1990, like she was.  The year the Buffs football team won the National Championship.
Tagged: Colorado BuffaloesDan HawkinsEd McCaffreyLaviska Shenault Jr.Les Milesmike macintyreNCAA FootballNebraska CornhuskersNick SabanPac-12Steven MontezTroy Calhoun