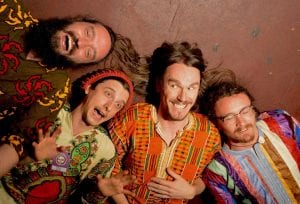 The Copper Children is a folk band from Denver that specializes in trippy music and videos, blending what they call “psychedelic rock into a moving performance.” The Copper Children formed in 2015 and released their first album What We Are, in 2016. Their upcoming album, Speaking in Spirits, will also be released soon.

The Copper Children have made a shift in their sound with the newest album, and the band was pleased to hear that their Denver fanbase would be sticking by them, the same way that the band has stuck together over the years. In an interview with Westword, the band stated:

It’s fun to see the community in Denver rally around us, too. I think the microcosm of our relationship and us being able to stay together and work things out is a beautiful example of what I think we all want to see: the world working together better, too.

If we can work together in those small circumstances, we actually stand a chance. But if we can’t do that, how’s the world going to be a better place, you know?

The Copper Children have played across the United States in national tours, thought they frequently come back to their hometown of Colorado. Upcoming shows include the Bozeman Taproom in Bozeman, MT, on July 19th, Northwest Winefest in Sandpoint, ID on July 20th, then back home to Colorado in Durango at the Animas City Theatre on July 23rd.