Home » Uncategorized » Gratitude at OMF: The True Start of Fall in Denver

Gratitude at OMF: The True Start of Fall in Denver

Autumn is very, very slowly beginning to creep into the far corners of our still very hot September days here in Denver and I don’t think I have been more ready for it than I am this year. Although I think I say that every year. With not only the beautiful cooler weather, the transformation of the colors of the aspens, and of course, Halloween, there is something magical about Fall time; in the land of craft beer, Denver has a few extra magical moments that make this time of year simply the best.

Last week I compiled a short list of must-go events in September, leading up to our very own Super Bowl: GABF. This week, I will highlight my favorite annual event that marks as my official kick off of Fall in every perfect way: Gratitude at Our Mutual Friend Brewing. Rather than wait to attend this year and then tell you all about everything you missed (that would just be mean), I’m instead going to hype up the big day in hopes of seeing you there on September 30th! 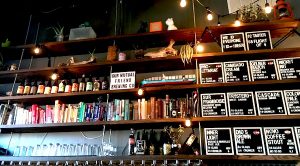 Fair warning: I am a little biased when it comes to OMF. In a domino effect, it is the center point where my life here in Denver began, and where nothing would exist as it does today if not for this little brewery. My long-time, childhood friend, Bryan Leavelle, hailing all the way from Southern California co-founded Our Mutual Friend years ago, and I promised I would one day visit.

Flash forward to 2014 when I made due with that promise, visiting him, his family, and his twin brother Ryan, who now brews for OMF. Why does all of this matter? Because that fateful day in October just happened to also be a day that my now-husband was working the bar, where we met, subsequently fell in love, got married, had a baby in a baby carriage, lived happily ever-after and all that good stuff. All due, in part, to a by-chance meeting under Autumn leaves over a little craft beer. The best part is, there are so many stories like this (I just met another couple who me each other at OMF and are getting married this weekend and…toasting with OMF beer instead of champagne). Brewery love stories? How Denver can you get?

Back to the good stuff: Our Mutual Friend is one of the genuine staples of the neighborhood. It has sat on a little lot on Larimer street before RiNo was totally impeded upon with peddle hoppers, long lines of tourists, the Denver Central Market, parking meters, etc. etc. All of which, have been great for business and continue to build the once gritty and near-secret neighborhood into one of the most popular and hip places in Denver.

Point being, OMF’s ever-growing success is one of the reasons why. With local artist Jeremy Burns’ sprawling bright mural on the front, and dangling porch lights lit no matter the weather, OMF has always had its own style. You won’t find as many babies as you will at breweries in other districts, but instead, local artist’s work displayed around its quirky, homey atmosphere, alongside the local artists, musicians, and industry folks that make RiNo, RiNo. Newcomers, thrill-seekers, beer lovers. They have it all; a vibe akin to the coolest pits of Brooklyn, if Brooklyn was this friendly and had this good of beer.

With Gratitude still a few weeks away, the tap list currently hosts some of the go-tos: Novo Coffee Stout on Nitro, Dad’s Brown Ale, Proletariat, and their Colorado Pale Ale. But Gratitude promises the special release of the Gratitude 4 Pink Guava Saison in bottles (also on tap!), and Gruppetto Tiramisu Imperial Stout Crowlers. Also on the tentative list, adding to its current tap list: Cherry Gose, Wierding Way, Brave Little Grisette Collab with Trophy, and Broken Time Blackberry Golden Collab with Spangalang. The point of Gratitude is the exact definition of the word: to show appreciation to the solid fan base of fine people that have built OMF into the award-winning, well-sought out brewery it is today. They are therefore celebrating by having $4 for 14oz standard and 10oz special release pours all day. Plus, the party cannot be complete without a plethora of merch, giveaways, food trucks, and of course: a photo booth to prove you were there.

You haven’t done Denver if you haven’t visited Larimer Street in all its gritty, genuine glory, and sat next to the fireplace on a cool autumn evening, sipping on Dad’s Brown. Which you should probably do, after Gratitude’s helluva party. 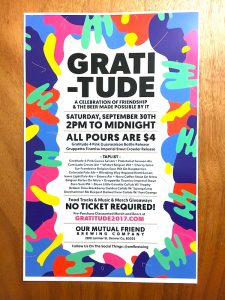 Gratitude starts at 2pm on Saturday, Sept. 30th. No tickets required. Pre-sale packages are on sale now--guarantee yourself some take-home goodies!

Erica Hoffmeister
Erica Hoffmeister earned an MFA degree in creative writing and an MA in English from Chapman University of Orange. She has creative work published in the literary journals Shark Reef, Rat’s Ass Review, Split Lip Magazine, and others. She has been teaching for over a decade (claiming 8th grade as her favorite grade level because she’s an actual crazy person) and currently teaches composition and literature courses for Morgan Community College out of Fort Morgan. Always considering herself a bit of a beer nerd, she met her husband at Our Mutual Friend brewery while on vacation and fell in love with him, Denver, and its beer scene in one fatal swoop. While born and raised in Southern California, don’t worry—she’s earned her spurs as a transplant by creating her very own Colorado native. As a new mom, she is currently renegotiating her role as a world-traveling, bar-hopping, beer-loving free spirit by taking advantage of Denver’s beer culture, where you can find as many babies in breweries on any given afternoon as beers on tap.
Tagged: beerBreweriescraft beerdenver beerlocal beer