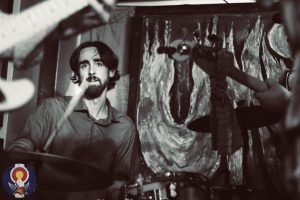 Denver’s eclectic group of artists playing electronic fusion and jazz music is what helps the city stand out in its music scene. One of these artists, Chris Geary, currently plays drums in the Denver-based band SYCDVK. The group’s sound pieces together multiple genre elements, forming an experimental psych-rock mixture that can be groovy and brass-oriented at some times and harder rock at others.

SYCDVK just finished up a tour through the Midwest, but Geary is no stranger to traveling. He moved to Colorado from Long Beach, California roughly seven years ago after a friend told him that he was in need of a drummer. Before California, Geary lived in Boston, Massachusetts where he was first introduced to drums and percussion by his father at the age of 10. His first project in Colorado was with Smoking Paloma and the Bodegas while he also played in wedding bands and at open mics. SYCDVK became his next passion project when Geary and other musicians he knew first started jamming and mapping out practices together at an open mic night at Squire Lounge. The group released their first album, Aubrey, in 2017.

Currently, SYCDVK is comprised of Chris Geary, Peter Warekois, Miles Mckee, Nick Milano, Tony Milano and Nic Jay. The band released the EP Lurking Earthlings, which revolved around the idea of aliens, in April of last year. Geary believes that the topic is always relevant in different contexts and translated to a sound that he felt was more otherworldly than their previous album. The themes of space and the uncertainty of life are notably prevalent on the songs “Pearle” and “Oasis in Space.” Throughout the EP there are space transmissions echoing with crashing cymbals and raging horns, almost generating a feeling of launching off the planet. Spies will be the concept for the next five-song EP the group is working on, which Geary hopes will be more accessible to a wider range of listeners.

“We try to stay groovy and relevant but also unique and original. Before we were jazzier and more loungey; now there might be more rock sound, so with Spies we’re going to meet in the middle,” Geary said.

Geary and the group grab inspiration from concepts, their own backgrounds and from other musicians in the Denver music community. He believes that the scene, especially in regards to playing rock and jazz, has become a family to him, in which people can feel free to experiment or play around in different positions and bands. A handful of the bands in Denver he is most excited about at the moment are Patient Zeroes, Eldren, and All Chiefs. 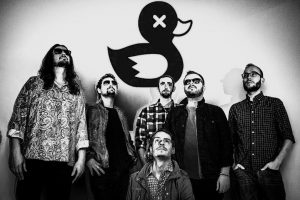 SYCDVK does most of their promotion by making doors open for themselves. They make collective decisions when booking and promoting whether on the radio, online or hitting the streets. Geary hopes they will be able to do more traveling in the future to California and making recording connections in both locations, but until then they will continue playing venues around the city.

The band’s next show is at Larimer Lounge on January 11th, and they will have more throughout the rest of this winter. To find out more about Chris Geary and listen to SYCDVK, check out www.sycdvk.com.

Helen Kuhn
Helen Kuhn is a writer hailing from the east coast. She moved to Colorado in 2015 to finish getting her Bachelor degree in English at the University of Colorado. Before making the move to Denver she interned with the Daily Camera in Boulder and with Philadelphia Weekly. She spends her times slinging drinks for work and writing poetry for fun. When she isn't writing or messing around on the keys at open mics her passion for beer has led her to finding some of the most delicious breweries around the city. She can't wait to explore more and share her love for Colorado.
Tagged: alternativeChris GearyDenverdenver musicjazzpsyhedelic rockrockSYCDVK