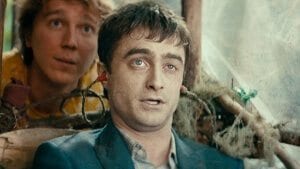 Most of us approach the summer movie season with a kind of resigned dread. We’re confronted with a vast wasteland of sequels, remakes, terrible comedies and cheap horror movies. It can feel like you’re getting punched in the face by CGI, or walloped by an obnoxiously loud kid’s movie. Worst of all is the feeling of, “Oh, dear God, not this again.”

It can seem like the summer is where creativity goes to die, where art is thrown into a cell and left to rot. Yet as much as we complain that movies are more terrible than ever, there’s always something original out there. But there’s an old curse out there you’ve probably heard. May you live in interesting times.* In this case, it makes me wonder. When audiences complain about a lack of risk-taking on the part of filmmakers, how much originality do they really want? When they get something truly special, will they accept it?

I hope so. We’re not in a good place now. Our country is locked in a truly vile Presidential race. In the last week, multiple shootings have torn our social fabric. Public discourse has transformed into irrational shouting matches. Perhaps we need something transcendent to help lift us to our higher selves. And perhaps Swiss Army Man, a film about a depressed man and his magical corpse buddy, is just what we need.

We meet Hank (Paul Dano) as he’s preparing to kill himself. He’s stranded on a tiny desert island, and he’s fashioned a makeshift noose. Nobody is coming to rescue him. He wonders if anyone even realizes he’s gone. So he stands on a cooler and prepares to bid adieu. Yet, he sees something. A dead man (Daniel Radcliffe), his body washing up on the shore. Initially, Hank thinks that this corpse is one last way for the universe to use him as its cat toy. But a side-effect of the cadaver’s decomposition is gas. Huge amounts of high-pressure gas, enough for Hank to use the corpse as a makeshift speedboat. That’s not the weirdest thing about this film, it’s not even the fifth-weirdest thing.

The pair makes it to land, a wooded beach. Hank drags/carries/manhandles the dead man with him. Why? Partially a sense of practical necessity, and partially out of loneliness. Then, the situation gets even odder when the corpse starts speaking. His name is Manny. As Hank and Manny blunder through the woods on a quest for civilization, Hank discovers his recently deceased pal is full of surprises. The body can karate-chop through logs, contain gallons of water in his gullet, and light farts on fire. He’s also a blank slate, with no memory of who he was before. Before what? Who knows? But he’s curious about the world, like a toddler. He wants to know everything, why everyone poops, what sexuality is for, why it’s so hard to speak to a beautiful woman (Mary Elizabeth Winstead) sitting alone on the bus.

For a time, Hank doesn’t concentrate quite so much on getting home. He instead focuses on helping Manny understand the world around him. Elaborate sets are built out of garbage. Hank explains, “If you don’t know Jurassic Park, you don’t know sh*t.” As they explore the vastness of life together, from the mundane to the mysterious, their relationship shifts and changes.

I know, I’m just as surprised as you. Who would have thought that the film the wags on Twitter dubbed The Farting Corpse Movie would straddle the line between low culture and high art in such an interesting way? And, yes, there’s a tremendous amount of farting, along with an undead erection that acts as a compass. It should be off-putting, but unlike a mean-spirited dudebro comedy, the scatological humor here is more innocent.

I’m kind of amazed that a film that takes these kinds of risks and has such an assured control of tone is a debut. But it is. Directed and written by Daniels, the nom de plume of Dan Kwan and Daniel Scheinert, they’ve made a first feature that’s blazingly original. These guys made their bones in the world of music videos, most notably for Turn Down For What. Based on the concept or the trailer, you might think the film is overbearingly quirky, like Wes Anderson and Michel Gondry were shoved into a Brundlepod and this was their unholy fusion.

It is a little twee, but it means to be at the right time. Swiss Army Man drills down to some serious philosophical depths, but it uses fart jokes as a philosophical Trojan Horse. Some deep questions about the damaged nature of humanity are raised, questions about how overcoming fear is so hard, but with the right person, it doesn’t have to be. The film is illogical, but in a dreamlike way. It doesn’t run on anything but emotional logic, and Daniels have calibrated scenes perfectly. When the leads are excited, shots and edits are faster and choppier, but when things are calm, the pace of the film matches their more leisurely mood.

I can’t imagine this film working half as well without the very particular chemistry Paul Dano and Daniel Radcliffe share. For a while now, Dano has been building up a particular niche in the acting world. Whether he’s in the obnoxious Little Miss Sunshine, or the astonishing There Will Be Blood, he excels at playing a weirdo, and one that can shift from adorable to alarming with great speed. As Hank, he’s a man that’s wounded and running from something. We don’t know what. Could be a lover, a parent, the world. His performance is brave, and he doesn’t shy away from the disturbing implications of a guy who’s decided that a dead guy is his best friend.

Speaking of dead guys, let’s talk about Radcliffe for a moment. Starring as Harry Potter turned out to be a boon since he apparently made all the money, and now he can take roles based purely on how interesting and challenging they are. His Manny is fascinating, a true tabula rasa. He approaches the world with wide-eyed curiosity, and as he learns, he goes through an accelerated stage of development. Childlike wonder. Adolescent prurience. Adult self-loathing and disgust. Since he can’t move, Radcliffe has to sell all of this through stiff lips and a glassy stare. It’s a performance of astonishing subtlety, and Radcliffe is able to shift emotions believably and lightning fast.

Swiss Army Man is many things. It’s a juvenile fart-fest. It’s a deep and often upsetting look at the human condition. It’s a film that cost $3 million and looks better than other films with ten times the budget. It’s a film with a vision, one that’s not afraid to be alienating while it searches for a truth that’s common to all of us. It’s one of the best films of the year.

*Fun fact: This is not an actual Chinese curse.

Tim Brennan
Tim has been alarmingly enthusiastic about movies ever since childhood. He grew up in Boulder and, foolishly, left Colorado to study Communications in Washington State. Making matters worse, he moved to Connecticut after meeting his too-good-for-him wife. Drawn by the Rockies and a mild climate, he triumphantly returned and settled down back in Boulder County. He's written numerous screenplays, loves hiking, and embarrassed himself in front of Samuel L. Jackson. True story.
Tagged: dan kwandaniel radcliffedaniel scheinertmary elizabeth winsteadpaul danoswiss army man