Mondays in my world need a lot of help. Case in point: I was supposed to turn in this column on Monday, but it’s now Tuesday and here we are, still pecking away at this keyboard. Let it be known that I don’t do mornings or Mondays. Thus, when I heard that the first day of the workweek would be endowing with a magical evening every week, I trotted my caffeinated bones out to Capitol Hill to see what was going on. 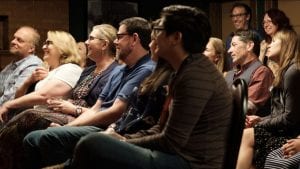 Parking is a bitch in Cap Hill; a magician will never tell you the secret of her tricks, but I’ll throw you a bone on this one: Logan St. and 11th-12th Ave. is “no parking” until 7pm, and so you might find empty spaces there when you arrive for the 7:30pm Denver Magic Show. Stow your vehicle (or better yet, bike or scoot to the venue) and head in the side door of the historic Patterson Inn, on 11th Ave. for direct access to the bar, which is my favorite kind of access to bars.

The Patterson is an amazing old building whose wood-paneled walls and antique brassware hint at hidden stories and ghostly presences with about as much subtlety as Dolly Parton’s wardrobe hints at “country.” The underground room housing an enormous oak bar was already packed with people–get tickets early, folks. I squeezed my self and my G&T into the last remaining seat and watched the Patterson’s innkeeper emerge from the six inches of space between the red curtain in the portable frame and the wall paneling. Getting a full-grown man stuffed into that space was Magic Trick #1 for the night. He welcomed us to his premises with the promise that the building itself was “extremely haunted.” Since ghosts and magic are both about believing things that you cannot see, this pleased me greatly. I don’t believe in either ghosts or magic, but I want to. I *do* believe in the effect of believing in magic, which is to make the magic real.

Magic Trick #2 belonged to James Lopez, the blue-eyed guy in the suit with the skinny tie (Quick aside: wear a goddamn belt, sir; you’re on stage), who doubles as the house magician for Invisible City and features in the Zabiti Circus. He spent several fluid minutes jiggering around the number of coins in shot glasses and the fists of willing participants in a smooth display of legerdemain and charm. A polished opening to the show. I also appreciated that he called out a little girl in the audience named Paige, who was one of the youngest magic open-mic participants and notably female. You go, Paige! Be a badass lady magician! 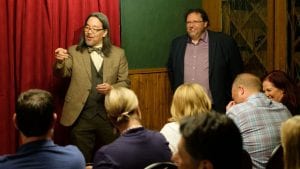 Next up was Gregg Tobo, who has the dignity to wear a houndstooth jacket and bowtie. As I write this, I realize that I apparently have high sartorial standards for weeknight magicians. As part of his performance, folding a large sheet of paper around such that the numbers written on it would magically recreate those named by the audience, he recited Percy Bysshe Shelley’s poem, “Ozymandias.” I instantly devolved into *that guy* as I not-quite-silently recited the piece along with Tobo, most certainly irritating my neighbors, but probably pleasing my 8th grade English teacher, Mrs. Schmuck (I am not making that name up), in whose class it was required memorization. The poem still clogs up my usable memory space–right along with the three types of rock, which I learned in 3rd grade. (They’re igneus, metamorphic, and sedimentary, in case you’re wondering, and they pop into my head at random and inconvenient times to this day.) Tobo turned out the sheet of paper with all the right numbers inexplicably arriving in the right arrangements, and his recitation of the poem was much better than mine, too.

At the opening of his act, Tobo claimed it would be the most amazing thing we’d see all week, to which I thought in response, “Sir, we *do* have YouTube.” I was wrong. Tobo pulled out a pair of Rubik’s cubes, placed one aside under a handkerchief, and proceeded to manipulate the other while blindfolded, while I, the only person in the house with an analog watch, timed him. I don’t want to be *that guy* twice for Mr. Tobo and spill a spoiler here, but suffice to say that the resulting trick really was the coolest thing I’ve seen all week. I know a guy who can solve a Rubik’s cube while his pants are on fire, but that is still less impressive than Tobo’s trick. Sorry, Warren.

Intermission was a delightful time in my life, when I wandered around the hotel and ate two warm cookies off a plate in the lobby that I am very certain were not intended for my consumption, but nevertheless were quite tasty. In return for that trespass, I will enter another link for the Patterson Inn here and say again (truthfully) how lovely it is. 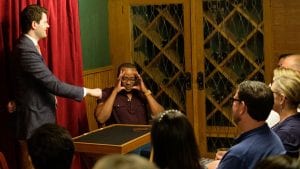 Closing the show was William Rader, who made me spit-take when he announced the use of his “giraffe hands” in magical manipulation, a direct shout-out to me, personally. Thank you for remembering, William. Whenever I see Rader perform, I get the urge to drink a Pepsi-branded seltzer water. He uses his ungulate phalanges to do elegant maneuvers with coins, cups, and balls. Some of the tricks worked on mechanisms I found genuinely incomprehensible. I could probably guess how some of the others happen, which isn’t really a criticism. Physics are physics and the impression of breaking their laws is a magician’s stock in trade. It’s sleight of hand and Raders’ do it exceptionally well. I know how it happens; I still shamelessly love it.

Ghosts might be our deepest wishes and darkest fears made apparent by our minds, and summoned by a plate of warm chocolate chip cookies in the lobby. “Magic” might be the clever movements of nimble hands and the hard-won skills of a mnemonist. As I’ve said before, all live theater is magic. We believe it and make it so. Another definition of magic might be “what I can’t do.” For me, this would include a lot of things, from aerial gymnastics to singing on pitch, but definitely includes making copper cups jump around on a table and have balls appear and disappear under them.

There’s a lot of things I can’t do, and magic is one of them. I can’t do even the sleightest of hand. But I can head over to an historic landmark on a Monday night to see what trick is turning lately in the Denver magic scene. Maybe I’ll see you there, even if it is a Monday.

Jessie Hanson
Jessie Hanson lives and works in Denver and couldn't be happier about it. Like the best-possible kind of Jekyl-and-Hyde scenario, she splits her life between science and storytelling. During the day, she performs clinical diagnostics and messes around with test tubes. At night, she performs behind the mic as a standup comedienne, in the air as a circus aerialist, and in rhinestones as burlesque dancer. She begrudges the hyper-inflated cost of a decent pair of false eyelashes. When she's not on stage, she sweating it out as an endurance athlete in triathlons and marathons across the West. She begrudges the hyper-inflated cost of a decent pair of running shoes. She's thrilled to be on board with OnDenver and writing about science, comedy, circus, athletics, and general fun on the Front Range!
Tagged: capitol hillDenverHistoricmagicMondayweeknight