Home » Blog » Beer » Brewery Rickoli: Where Everybody Knows Your Name

Brewery Rickoli: Where Everybody Knows Your Name

In the quiet suburb of Wheatridge off 44th and Wadsworth, lives a brewery that embodies the bordering community: laid back, friendly, unpretentious, and true to itself. Wheatridge is unlike the other surrounding suburbs of Denver; there are no large plots of track developments, in fact, no construction at all (talk about a breath of fresh air!). You won’t find a Chili’s or Olive Garden; it is as if someone cast the city in a time-freezing protection bubble and somehow, all the mom-and-pop establishments operating for the past thirty years are still thriving, nestled in still-full strip malls. The whole town feels like a 90’s childhood memory, untarnished and wrapped in safe nostalgia. It is no surprise then, settled in a strip mall and neighboring a head shop, a buy-back video game shop, and a second-hand music and bookstore, that the Brewery Rickoli fits right in.

As founder Rick Abitbol describes it, the taproom offers “a relaxed and friendly space to gather.” It sets itself a part from most Denver breweries, which often cater to the tourists and self-proclaimed beer nerds. And as much as that describes me at times, and as much as I appreciate these establishments and the success the industry has brought our city because of beer tourism, sometimes you just want to go to your bar and have a pint. Brewery Rickoli is that bar for you; it is everyone’s. As the first microbrewery of Wheatridge, Rickoli is a neighborhood establishment. As we nestled to a back table to enjoy our selected beers and observe, I noticed that everyone who walked in to take a seat at the bar was a regular. They strolled in, in one’s and two’s; it is the kind of place where no one comes in together, but everyone knows one another and is talking to each other. It’s the kind of place where you just know you’ll see a friend, and you’re excited about saying hello after a hard day’s work. And although we are not (yet) regulars, it was also not the kind of place that makes you feel as if you’re walking into someone else’s clubhouse. It just felt like home, and home we made it. 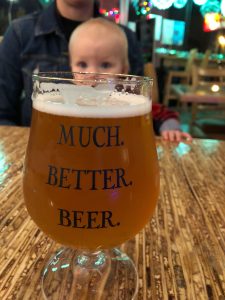 Also, their lack of pretentiousness is something I especially appreciate and this sets them apart in the Denver beer scene. Don’t get me wrong; their beer is really, really good, and they have reason to be full of themselves if they chose to be. Even my husband (who is a beer snob, though he won’t admit it) was particularly impressed with the Black Pline Black IPA—a compliment I rarely hear this hypercritical industry expert gift. But they don’t need to succumb to a trendy theme or clever shtick. The beer is great, the atmosphere is laid back and unassuming, what else do you really need? Oh—snacks! While I’ve expressed my adoration for breweries that have been implementing full menus, I also appreciate the simplicity in how Brewery Rickoli keeps their patrons fed. There is a snack table with Tupperware containers of the essentials: Hot Cheetos, chips, as well as a popcorn maker, and the server will also heat you up a Bavarian pretzel or frozen pizza. This dive bar-esuqe approach to food certainly adds to the effect, and you’ll very much enjoy making a new friend or catching up with an old one with a boat of Cheetos and a pint of M.E.H. 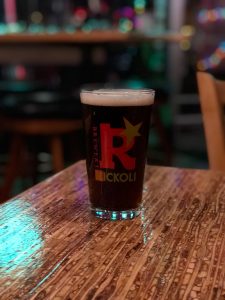 The beers at Rickoli also add to the effect. Rick Abitbol himself, is the subject of many of the posters of each beer—as well as the apt name of the brewery—personally connecting the owner and brewmaster to the product. There is no question of his pride in his work, as there shouldn’t be, given the beer’s quality. In addition, in an effort to welcome all drinkers, all of Rickoli’s beers are gluten free. There is also a fair range of styles, all just with enough of a splash of Abitbol’s personal style to make them his own. In addition to the Black IPA—they have one of my favorite beer styles that I feel like has always gone under-appreciated. Rickoli claims to love their hops and provides a variety of hoppy beers across the spectrum. From the Totally Eye-P.A. to the most intense Triple IPA dubbed, Statik, Rickoli has the awards to back their hops up (Statik was a 2015 GABF silver medalist!). That is to say, they are not short on malty brews either: The Social Lubricant Scotch Ale was my favorite of the batch I tasted, and I will be excited when the Vanilla In Yo’ Rye Rye Stout and the Oats McGoats Rye Stout both return on tap soon.

This is the kind of brewery you take your closest friends and family to when they come to visit. Brewery Rickoli is a special place where if everybody doesn’t already know your name, you should probably get to a point where they do. It’s like a trip back in time, when things felt less controlled by technology, beer trends, or heavy traffic.

Erica Hoffmeister
Erica Hoffmeister earned an MFA degree in creative writing and an MA in English from Chapman University of Orange. She has creative work published in the literary journals Shark Reef, Rat’s Ass Review, Split Lip Magazine, and others. She has been teaching for over a decade (claiming 8th grade as her favorite grade level because she’s an actual crazy person) and currently teaches composition and literature courses for Morgan Community College out of Fort Morgan. Always considering herself a bit of a beer nerd, she met her husband at Our Mutual Friend brewery while on vacation and fell in love with him, Denver, and its beer scene in one fatal swoop. While born and raised in Southern California, don’t worry—she’s earned her spurs as a transplant by creating her very own Colorado native. As a new mom, she is currently renegotiating her role as a world-traveling, bar-hopping, beer-loving free spirit by taking advantage of Denver’s beer culture, where you can find as many babies in breweries on any given afternoon as beers on tap.
Tagged: beerBrewerybrewscolorado beerColorado Breweriesdenver beerdenver beer scenelocal beerrickoli beer