Home » Blog » Movies » You Are Not Prepared

You Are Not Prepared 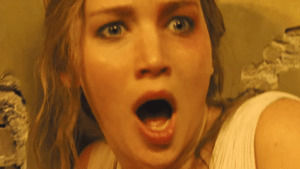 If you’re anything close to a movie nerd, you’ve probably seen references to CinemaScore. Let’s talk about what that is before we get to the subject of today’s review.

CinemaScore is a market research firm out of Las Vegas. They perform audience surveys to rate their experiences in 25 major cities around the United States. Essentially, you’re given a card and asked to rate the film on a scale from A to F, whether or not you would buy the film on DVD, and why you chose to see that particular film. Bear in mind that it’s not necessarily an indicator of quality. Rather, it’s used more as a way to see how effectively a film is marketed and as an early indication of how financially successful it’s likely to be.

Not many films are graded with an A+, but a few that have been are Schindler’s List and Toy Story 2. Most films seem to get a grade between A-B.* However, only a few films have ever earned an F rating, a rating that means either the film should never have been made in the first place, or that it was advertised incorrectly and precisely the wrong crowd saw it. A failure like Disaster Movie has gotten an F, but so has challenging material like William Friedkin’s Bug.

Darren Aronofsky’s newest film mother! was recently awarded a CinemaScore F grade. We know that now going in, but what does that really mean, though? To understand that, let’s talk about the film itself. Strap in for this one, guys, because we’re dealing with a film that begins on a simple note, then goes to amazing places.

The action all takes place in the middle of the woods within a massive and isolated farmhouse. We learn that a fire struck the home, and two people are working to renovate it. Let’s be real, though, only one person is really doing the work. That would be Mother (Jennifer Lawrence), a young woman and literal homemaker dedicated to bringing life and beauty back to the house. Her husband, only known as Him (Javier Bardem) makes approving comments about her tasks. He’s a writer, though, and he’s tormented with a bad case of writer’s block.

During one evening, they hear a knock at their front door. The visitor is a Man (Ed Harris), and he claims he was told that the house is a bed and breakfast. It isn’t, but that doesn’t stop Bardem’s character from enthusiastically asking the Man in and inviting him to stay the night. The Man is somewhat lacking in social graces, has a nasty cough, and is sporting a mysterious wound in his side. Lawrence’s character wants him to leave. Him won’t hear of it, and considering the Man is secretly a huge fan of his writing, he’s thrilled to have someone around to stroke his ego. Mother isn’t happy about this, but she goes along with her husband’s wishes.

There’s another knock at the door. This time, a Woman (Michelle Pfeiffer) is there. She’s the wife of the Man, and she breezes into the house. Bardem’s character eagerly asks her to join them, and you will not be surprised to learn that Mother isn’t pleased by this. Additionally, an instant antagonism springs up between Mother and the Woman. The Woman asks her weirdly personal questions, questions about her sex life, about why the couple doesn’t have a child yet. On top of all of that, the Man and the Woman are constantly making messes around the house, forcing Mother to clean it all up.

The Man and the Woman’s Oldest Son (Domhnall Gleeson) and his Younger Brother (Brian Gleeson) show up next. They are agitated due to some inter-family issues. There’s an argument. Him wants to help, and the Man and the Woman appreciate his involvement. And Mother? Well, she just wants all these people the hell out of her house. After that, things get weird. Why does Lawrence’s character keep drinking water mixed with a mysterious yellow powder? Why can she appear to sense the “heartbeat” of the house? Why will nobody listen to her? To say that things get weird is like saying that for 1,503 people, the sinking of the Titanic was somewhat inconvenient.

Somewhere in this great country of ours is a person that’s a massive fan of Jennifer Lawrence. They saw the trailer for mother! and thought to themselves, “J-Law has a new movie out? Keen!” This fan got to their local theater posthaste, plunked down their money, and settled into their seat expecting a film of a certain kind. As the end credits rolled, our hypothetical fan may have felt anger or betrayal. Their response to the two hour and one minute nightmare inflicted upon them was likely similar to that of George W. Bush at the Trump inauguration, where at the conclusion of the swearing in he reportedly said, “That was some weird sh*t.”

It’s true that mother! absolutely is some weird sh*t! As my wife said as I was telling her about the film, “People don’t like to be made uncomfortable.” This film is precision-engineered to make audiences feel a creeping sense of dread and disorientation. Darren Aronofsky is one of our most talented directors, and also one of our most uncompromising. He’s made a film that’s heavily surrealistic and claustrophobic. The camera is constantly pressing into Lawrence’s face, and we often see other characters and other events taking place behind her and over her shoulders. Working with his usual cinematographer, the gifted Matthew Libatique, Aronofsky’s film is a horror show for introverts.

But what does it all mean? Aronofsky wrote the screenplay, and if you look at his filmography, you’ll see a filmmaker fascinated with how artists relate to their art, and how people relate to religion. There are a number of ways to read the film,** an examination of the evolution of Christian belief, a look at the creeping horror of fame, or an allegory about environmental destruction. What’s the “right” interpretation? That’s the great thing about great art, your take on it is a union between the artist’s intention and the perspective you bring to it. There isn’t a wrong way to look at it, but there does have to be a willingness on the part of the viewer to engage themselves. Aronofsky isn’t just throwing around weird imagery for fun. There’s a definite point to what he’s doing, and if you allow yourself to get on his highly specific wavelength, you’ll be treated to an utterly unique experience.

The primary cast is filled with some of the best in the business, working with challenging material. They rise to the occasion beautifully. Jennifer Lawrence has become almost omnipresent, and during the last few years somewhat of a backlash has arisen against her. That’s a pity because people sometimes forget what an immensely talented actor she truly is. She’s the audience surrogate here, and her character spends roughly as much time wondering what the hell is happening as the average viewer does. She gradually ramps up her confusion and terror to a fever pitch, and there aren’t many other actors who could sustain that level of intensity. Having said that, Michelle Pfeiffer steals not only every scene she’s in but also the entire film with a role that’s calculating and filled with a vicious sense of humor. God, I missed her.

Most Americans don’t like to take risks when it comes to art. When a movie catapults them outside of their comfort zones, they get pretty pissed off about it. That’s why mother! is going to tank at the box office, because it’s challenging and confrontational. Remember our hypothetical J-Law fan? What if that person is on a date? What if after the film, the two of them drift to a coffee shop or quiet bar and spend the next few hours unpacking what the film means, and how it made them feel? While I’m absolutely gobsmacked that a major studio released mother!, there’s an opportunity here for viewers to dig into a work that’s intelligent, perceptive, and special. Having said all that, while this is a film I profoundly admire, I never want to see this film again.

*The Emoji Movie received a B score. Again, it’s not an indicator of quality.

**If you’re interested in going into the metaphorical weeds about this film, check out this excellent article from The Washington Post.

Tim Brennan
Tim has been alarmingly enthusiastic about movies ever since childhood. He grew up in Boulder and, foolishly, left Colorado to study Communications in Washington State. Making matters worse, he moved to Connecticut after meeting his too-good-for-him wife. Drawn by the Rockies and a mild climate, he triumphantly returned and settled down back in Boulder County. He's written numerous screenplays, loves hiking, and embarrassed himself in front of Samuel L. Jackson. True story.
Tagged: brian gleesondarren aronofskydomhnall gleesoned harrisjavier bardemjennifer lawrencematthew libatiquemichelle pfeiffermother!