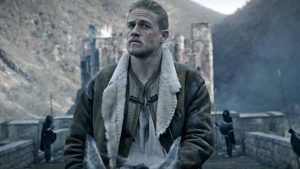 We live in a time of great uncertainty. Our President may have committed illegal acts prior to and during his time in office. Our country is more divided than possibly ever before. The prestige of our nation rests on a knife edge. But there’s one question, above all others, that occupies the minds of virtually everyone in the Republic and beyond.

Is it really that hard to make a good King Arthur movie?

Apparently so, since the last time the Arthurian legend appeared in theaters and it wasn’t some form of a mattress fire was way back in 1981 with the enjoyably bananas Excalibur. Since then, we had 1995’s treacly First Knight, 2004’s wrongheaded King Arthur,* 2007’s virtually ignored The Last Legion, and other films too obscure to go into here.

The characters are in the public domain, and every few years somebody drags out the old war horse and takes a crack at it. But the weird part is, many filmmakers don’t seem to like the core concepts of nobility, chivalry, betrayal, and rebirth. Why? Is it because we’re living in a time of breathtaking selfishness, so the idea of sacrifice is seen as hokey? Personally, I think it’s that a lot of Hollywood folks can’t leave well enough alone. For example, King Arthur: Legend of the Sword likely came from an executive pitching, “What if we got Guy Ritchie to make a King Arthur movie, only he makes it in exactly the same way he made Snatch?” That executive would have immediately gotten a promotion, then they would all high-five and dive back into a mountain of cocaine.

We’re introduced to Uther Pendragon (Eric Bana), in the midst of a titanic battle between his armies and the forces of Mordred (Rob Knighton).** Uther’s brother Vortigern (Jude Law) has allied himself with Mordred and, being 100% evil, he proceeds to slaughter Uther and his wife. Prior to their untimely doom, Uther wraps his young son, Arthur, in furs and hides him in a boat. Unnoticed, the boat travels via river to the city of Londonium, where it’s found by friendly prostitutes. As so often happens, they adopt the lad as their own, and he has a wholesome childhood growing up in a brothel.

Adult Arthur (Charlie Hunnam) has become a small-time crook, running a number of scams to survive. He would likely live out his life in obscurity if not for the scheming Vortigern. He’s made an unwise deal for power with a tentacled water demon, but he wants more. The key to his ascendance is by wielding the mystical sword Excalibur, but the sword is inconveniently stuck in a stone. Only someone of the Pendragon bloodline can pull out the sword, so Vortigern’s plan is to force every male in the area to try yanking on Excalibur. Naturally, Arthur gets tangled up in a wacky misadventure, gets captured, and successfully extracts the blade. However, when he holds the sword handle with both hands, he experiences traumatic flashbacks of the murder of his parents, like he’s Sir Batman of Gotham.

At this point, an intelligent tyrant would immediately kill Arthur and secure his position. Vortigern is not an intelligent tyrant, and Arthur manages to escape with the aid of his colorful criminal gang. There’s Sir William…I’m sorry, that’s Goosefat Bill (Aiden Gillen), Bedivere (Djimon Hounsou), and my personal favorite, the martial arts instructor Kung Fu George (Tom Wu).

Let’s stop a moment and marvel at the fact that, in a King Arthur movie, there’s a character seriously named Kung Fu George. Seriously.

With the help of his crew and The Mage (Astrid Berges-Frisbey), Arthur must decide whether or not to confront his destiny and end the rule of Vortigern. Along the way, there will be elephants the size of skyscrapers, giant serpents, weird hallucinations, terrible CGI, and Arthur constantly calling everybody “mate.” Oh, and Merlin shows up for literally about six seconds. Sorry.

As you’ve no doubt guessed, I kind of loathe this movie. But before I begin savaging it, a few caveats. First, I genuinely enjoy Guy Ritchie as a filmmaker. Despite only being able to tell one story competently, that of wise-assed crooks pulling a heist, I dug Snatch and Lock, Stock and Two Smoking Barrels, and his enjoyably idiotic Sherlock Holmes movies. Ritchie is a playful and kinetic filmmaker, and when he’s working with the right material and cast, he can be a lot of fun.

Problem is, he has neither the right material or cast, plus I have my doubts that he’s connecting with the source. Ritchie worked on the script with co-writers Joby Harold and Lionel Wigram and it, for lack of better phrasing, sucks. We have a vague antagonist who wants power. Why does he want power? Because he’s evil! What does he want to do with the power? Evil things! We have a hero who Refuses the Call to Adventure, just like a million other protagonists in a million other movies. We have Arthur told by others repeatedly that people are rising up in his name. Why? How has he captured the imagination of the kingdom? The script occasionally leans into moments of potentially entertaining weirdness, like the aforementioned Kung Fu George, then sprints away and onto another action scene that’s too long.

I have a feeling that Ritchie knew how bad the script was and tried to distract the audience through his direction. The camera spins around Charlie Hunnam as he dispatches foes left and right, giant bats and other digital monstrosities wreck stuff, thundering music plays, characters run and roar in slow motion and the pacing is as hyperactive as an overcaffeinated toddler. Guys, it’s like this for two hours. Even during the rare moments where a couple of characters are simply talking, the movie strains to move like a poorly trained Golden Retriever pulling on a leash.

I think the right cast could have risen above all this nonsense. With one exception, everybody does fine with their underwritten roles. As the pointlessly evil Vortigern, you can feel Jude Law trying his best. I like the guy, but he’s got so little to work with. Aiden Gillen’s Goosefat Bill is an amusing rogue, and Djimon Hounsou is solid as usual. Then there’s Charlie Hunnam, a walking, talking black hole of charisma. Hunnam’s not a bad actor, and I recall him doing good work in Sons of Anarchy. Here, he’s a blank slate. He tries occasionally to capture the swagger of Errol Flynn, perhaps thinking he’s in a Robin hood movie instead of a King Arthur movie.

Once I realized I was in for a lousy time at the movies, my mind wandered, likely to protect itself. I despised this film and lost two hours of my life to it, but you don’t have to. That’s why, in lieu of talking about King Arthur: Legend of the Sword any further, I’m going to give you a delicious recipe for spinach bread.

*Making an adaptation of the legend of Arthur, but without magic, makes as much sense as making a Superman movie, only he doesn’t like helping people. Wait…

**As a fan of the Arthurian legends, this was the point in which my wife began to get extremely angry.

Tim Brennan
Tim has been alarmingly enthusiastic about movies ever since childhood. He grew up in Boulder and, foolishly, left Colorado to study Communications in Washington State. Making matters worse, he moved to Connecticut after meeting his too-good-for-him wife. Drawn by the Rockies and a mild climate, he triumphantly returned and settled down back in Boulder County. He's written numerous screenplays, loves hiking, and embarrassed himself in front of Samuel L. Jackson. True story.
Tagged: aiden gillenastrid berges-frisbeycharlie hunnamdjimon hounsoueric banaguy ritchiejude lawking arthur legend of the crown