Home » Blog » Movies » This Mother’s Day, Give Her the Gift of Robbery

This Mother’s Day, Give Her the Gift of Robbery

All of us have movies that, through their cinematic magic, burn themselves into our memories. The “how am I funny” scene from Goodfellas. The graduate level screwball comedy of Clue. The wrenching third act of Avengers: Infinity War. Even if you’re not a film nerd like me, I’m willing to bet copious amounts of folding money that there’s a film out there that took root in your brain.

Most movies aren’t like that, though. In 2016, over 700 films were released theatrically in American theaters. That number doesn’t take into consideration streaming platforms like Netflix and Hulu that release their own movies directly. You could probably either stream or buy on physical media the majority of those movies. But why would you want to?

Let’s face it — there’s a small percentage of films released yearly that are very good. Another small percentage that sucks really hard. The vast majority though is just kind of…well…there. They exist on a sliding scale ranging from “pretty good” to “meh” to all points in between. We see them, then promptly forget about them. 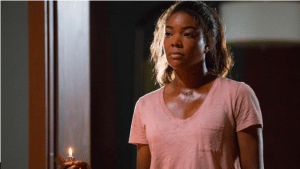 It can even happen to someone like me, a person cursed with a fairly extensive film memory. I just looked back at the movies I reviewed last year, and I had completely forgotten I’d even seen The Hitman’s Bodyguard. And I kinda liked it! Breaking In is another movie that is, yes, in fact, a movie. One that’s not bad enough to be howlingly stupid, nor good enough to be memorable.

Things start promisingly with a brutal murder. We’re (briefly) introduced to Isaac (Damien Leake), a man of wealth and possibly taste. While out for a jog, he has the misfortune of being blown away, which is not the recommended way to finish your exercise routine. Why was Isaac slain? He’s a criminal, currently on trial. What sort of criminal was he, I can hear you asking? Sorry to disappoint, but we never find out.*

From there, we’re introduced to Shaun (Gabrielle Union), the daughter of the dead man. Despite being estranged, it’s fallen to Shaun to sell Isaac’s massive estate in rural Wisconsin.** Her husband is working late, so she’s accompanied by her teenage daughter Jasmine (Ajiona Alexus) and her younger son Glover (Seth Carr). I’ll give the film faint praise 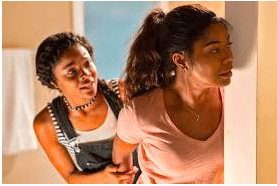 for portraying a normal family unit, and not having a cheap plot point where one of the kids is suffering from a mental disorder, bulimia, congestive heart failure, mange, leprosy, rockin’ pneumonia or the boogie-woogie flu. They’re just a family.

Anyway, they arrive at the estate, a sprawling high-tech house conveniently located in the middle of nowhere. The family quickly discovers that Isaac apparently had trust issues, since the joint is tricked out with an impressive security system. There are numerous surveillance cameras, motion detectors, and retractable security shields over the windows. Is it possible that Isaac is hiding something of great value in the house? Yes. Yes, it is. Is it possible that a group of ne’er do wells will come looking for it? Yes. Yes, they will.

In point of fact, a group of thieves believes a safe containing $4 million is located on the premises, and they 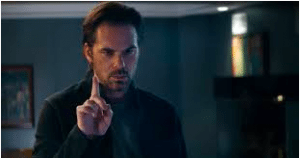 immediately take the kids hostage. Their leader is Eddie (Billy Burke), who fancies himself the mastermind. Duncan (Richard Cabral) is the mad dog who wants to waste the kids immediately. Sam (Levi Meaden) is twitchy, regretting his involvement, and probably regretting his blond dye job.*** Then there’s Peter (Mark Furze), who has the character trait of…um…wearing glasses. Shaun must evade this kooky quartet, rescue her kids, and get the hell out of Dodge.

I don’t know if I was being too subtle in the preceding paragraphs, but Breaking In is not a very good movie. That’s a shame, because I’m a sucker for a good home invasion thriller. Does this film have the gleeful brutality of You’re Next, the relentless nihilism of The Strangers, or the icy professionalism of Panic Room? No, but I’ll give it credit for brevity. At one hour, twenty eight minutes, Breaking In wastes no time getting started, delivers precisely what you paid for, then peaces out.

James McTeigue directed, and does a perfectly serviceable job. He’s a protege of the Wachowskis, and his first film was the excellent V For Vendetta. Since then, he’s made Ninja Assassin, which is not very good, and The Raven, also not good. Here, he’s okay, and his visual style is crisp and efficient. Part of the problem is McTeigue doesn’t effectively set up the geography of the house and the grounds. By not doing that, we’re never entirely sure where characters are in relation to each other. McTeigue also has a fun habit of overusing slow motion, as well as lateral tracking shots where a character moves across a room, stops, but the camera keeps moving and stops at a point where someone could 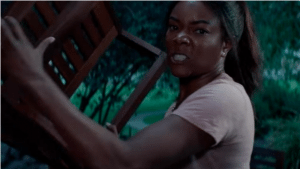 Either the script by Ryan Engle isn’t great, or it’s a trenchant commentary about the incompetence of criminals. For a movie like this to work, you need antagonists who are charming, hissable, clever, or all of the above. These bad guys are basically a pack of idiots. Eddie’s grand plan? Basically wreck the house until they find the safe, and maybe kill the family or maybe not. This guy is definitely not the Napoleon of Crime. Add to that some dreadful dialogue, one of which is Eddie’s unfortunate line, “You are a mother alone at the mercy of strangers. Your greatest weakness is locked in the house with us.” Guys, I sighed at this. Audibly and loudly. Daniel Day-Lewis couldn’t sell this.

The cast is divided into two groups: Gabrielle Union and everybody else. No disrespect to the cast, because they try their hardest with a script that sucks. I felt particularly bad for Richard Cabral as the rampaging Duncan. It’s 2018, and we don’t need the stereotype of a psychopathic dead-eyed Latino. I suppose I should be grateful his character isn’t named El Scorpio or some such foolishness.

But Gabrielle Union gives it her all! She’s a talented and intelligent actor, hugely overqualified for this film, and it’s not unlike an astrophysicist working a shift at 7-11. Here, we see her run through the woods, clamber across rooftops, get punched in the face and punch people in the face, grimace, yell, and completely outmatch her opponents. Between a weak script and unequal casting, we never feel like the gang is a real threat to her, so it’s similar to watching someone smash their way through a video game on God Mode.

Breaking In isn’t terrible, and there are far worse ways you could spend 88 minutes. It also has the misfortune to be released between the twin juggernauts of Avengers: Infinity War and Deadpool 2, virtually guaranteeing it will be forgotten. If you’re looking for a film with a kick-ass mom, this might do the trick, but instead it might be time to give Aliens another spin.

*Let’s just agree that he was charged with first degree crime.

**At this point, your nitpick sense is probably tingling. You’re thinking, “Hold up, Chief, if Isaac was on trial for being a baddie and was just murdered, wouldn’t all of his assets and property be frozen until the investigation was concluded?” You’re correct, and if a plot hole of that relative insignificance is chafing at you now, you might want to tap out altogether.

***Meaden’s hair also reminded me of a similarly regrettable dye job in my 20’s.

Tim Brennan
Tim has been alarmingly enthusiastic about movies ever since childhood. He grew up in Boulder and, foolishly, left Colorado to study Communications in Washington State. Making matters worse, he moved to Connecticut after meeting his too-good-for-him wife. Drawn by the Rockies and a mild climate, he triumphantly returned and settled down back in Boulder County. He's written numerous screenplays, loves hiking, and embarrassed himself in front of Samuel L. Jackson. True story.
Tagged: ajiona alexusbilly burkebreaking indamien leakegabrielle unionjames mcteiguelevi meadenrichard cabralryan engleseth carrl