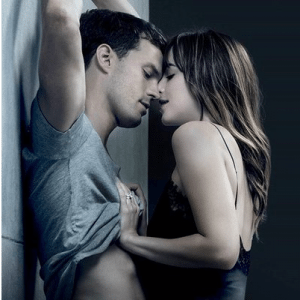 There’s a place for kink in the world, though you might not know that if you’re an American. Our great nation pays some pretty profound lip service to tolerance. John F. Kennedy was quoted as saying, “Tolerance implies no lack of commitment to one’s own beliefs. Rather, it condemns the oppression or persecution of others.” You could make the reasonable assumption that when Kennedy, a legendary enthusiast of boinking, spoke about tolerance, he echoed the larger beliefs of most Americans about sex, right?

It didn’t matter. Fifty Shades of Grey sold millions of copies. Many Americans lived out their fantasies vicariously,* and all was well, right? Again, no. In 2015, upon the release of the film adaptation, the movie was roundly protested. Some people believed the film glamorized the enslavement and humiliation of women. Others claimed that both the book and movie completely got the concept of BDSM wrong, and never explained that the submissive in the relationship holds all the power. Still others, like American Family Association President Tim Wildmon attempted a truly sick burn by saying, “A more apt title for the movie would be ‘Fifty Shades of Evil.’”

There are some books and movies that have had profoundly transformative effects on the culture. Sure, Fifty Shades of Grey made $571 million theatrically, and its sequel, Fifty Shades Darker, raked in $381 million. The franchise is reaching its…ahem…climax with the new release of Fifty Shades Freed, so you’d expect to see more Americans than ever recognizing that kink is a legitimate thing, and as long as nobody gets hurt physically/psychologically, then it’s all good in the hood. Yet again, no. Why not? Because Fifty Shades Freed is terrible.

Before we get into the plot, a caveat. My traditional plot synopsis will likely not make a hell of a lot of sense to those (like me) who haven’t experienced previous installments. That’s a problem, but we’ll get through it together. Onward!

We begin with the wedding of Anastasia Steele (Dakota Johnson) and Christian Grey. These two crazy kids have experienced a tumultuous romance, non-disclosure agreements, psychological torment, obsessive supervisors, the emergence of family secrets, and a weirdly unremarked upon helicopter crash. There’s kind of a  lot going on, but now things are going to settle right down. 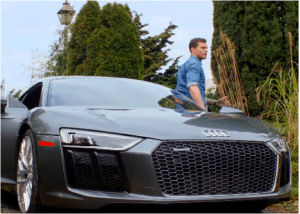 After the nuptials, Christian imperiously announces to Ana, “Let’s get out of here. I’m sick of sharing you with all theriff-raff.”** They celebrate as so many of us do, by having enthusiastic sex in their red leather walled sex dungeon. All is not bliss, as Christian becomes (or continues to be?) weirdly controlling. At a European beach, he becomes prudish when Ana wants to go topless. Is there trouble in paradise?

Well, of course there is, because Christian is notified about the explosion of a bomb in one of his company’s warehouses. Video cameras reveal the culprit to be…Hyde!

You don’t know Hyde (Eric Johnson)? In all fairness, neither did I. It turns out he appears in Fifty Shades Darker as Ana’s former boss.*** Hyde is an obsessive creep who is fired due to Christian’s influence. He’s sworn revenge, and with stealth skills that would impress Batman, he sneaks into the Grey couple’s luxurious apartment and past their highly trained security detail. Why? To kidnap Ana. It doesn’t work out, and the formerly supercompetent antagonist is arrested.

Naturally, Hyde is planning something. While all this nonsense is going on, there’s totally different nonsense regarding Ana accidentally getting pregnant, Christian stomping around worrying he won’t be a good father, Ana’s friend Kate (Eloise Mumford) getting engaged to a serial philanderer, and Christian’s architect Gia Matteo (Arielle Kebbel) unsubtly hitting on him right in front of Ana. There’s a lot going on.

During my theatrical rendezvous with Fifty Shades Freed, I think I fell into some kind of time-distortion field. That’s because, while we’re told the film is one hour, forty-five minutes long, it actually feels like it’s approximately 17 hours long. Bad movies are always long, and this is a Very Bad Movie. But why? To quote a famous internet meme, “whose responsible this?”****

Is it the fault of the cast? No, because they’re doing what is asked of them. I have to give Dakota Johnson credit, because I think she recognizes how ridiculous all of this is and approaches it with a sense of humor. We see that in particular with a scene involving ice cream. Johnson recognizes how goofy it is, and she runs with it. She takes the subpar material and uses it to make smart acting choices.

Jamie Dornan is less good, but I think it’s not due to his acting skills. The role of Christian isn’t a character, it’s a fantasy, the bruised bad boy waiting to be nursed back to health by the right person. Some people are into that. It’s fine, though not terribly healthy in real life. Also, and let’s be honest here, the film portrays the archvillain Hyde as a controlling weirdo obsessed with Ana. That makes him pretty much exactly the same as Christian, who is also a controlling weirdo obsessed with Ana, though one with better abs. Putting it bluntly, Christian comes off as a dick throughout this film. In scenes where he’s meant to be charming or playful, he feels more wooden. It’s also a pity that Johnson and Dornan have precisely zero chemistry together.

I would focus the majority of my ire toward the laughable script by Niall Leonard. Characters seem baffled by the obvious, such as Ana’s shock upon discovering that the ultra rich Christian owns a private jet. Foreshadowing occurs with the subtlety of a chainsaw when Christian loudly declares that he’s not ready for children. There’s more, but beyond the incompetent storytelling, the script delivers some strange messages. With the exception of some security personnel, nearly every woman in the film works for a man. We rarely see women in positions of power or agency. Also, for a film that alleges itself to be dangerous, it has a conservative streak a mile wide. Strip away all the sturm und drang, and this film is about nothing more than Ana trying to get her man to settle down. 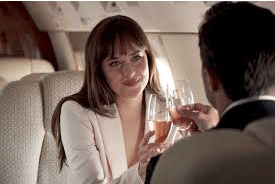 However, credit must be given to a certain sequence. We learn that consent is a critical component to Ana and Christian’s relationship. They’re getting frisky. She starts to feel uncomfortable and quickly says the safe word. He immediately stops. Given the rise of the #MeToo movement, and the entirely unsurprising discoveries that numerous members of the Trump administration have issues with domestic violence, it’s excellent that a mainstream motion picture has something positive to say about the importance of consent. Bravo, says I.

Someone is working on a novel or a script right now. It has something to do with a person or a couple exploring sexuality, sailing the seas of kink, and using those experiences positively. The usual do-gooders will throw a fit over it, but it won’t matter. This material will help more people recognize what healthy sex is, and that sex should be fun for all parties concerned. It will move us forward as a culture and, at some point, we’ll shake our heads, laugh at Fifty Shades Freed, and keep going.

*Others decided to seize the…ah…day more directly, and try things out for themselves. This led to a 50% spike in emergency rooms of sex toy related injuries.

**Christian would fit right in as a cabinet member of the Trump Administration.

***The plot summaries of these movies on Wikipedia are absolutely unreal. Ever have a six-year-old tell you a story, where things get progressively more strange and surreal? It’s exactly like that.

****This isn’t correct grammar, but it is accurate. To any English teachers reading this, sorry.

Tim Brennan
Tim has been alarmingly enthusiastic about movies ever since childhood. He grew up in Boulder and, foolishly, left Colorado to study Communications in Washington State. Making matters worse, he moved to Connecticut after meeting his too-good-for-him wife. Drawn by the Rockies and a mild climate, he triumphantly returned and settled down back in Boulder County. He's written numerous screenplays, loves hiking, and embarrassed himself in front of Samuel L. Jackson. True story.
Tagged: arielle kebbeldakota johnsoneloise mumforderic johnsonfifty shades freedjames foleyjamie dornanniall leonard