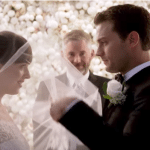 There’s a place for kink in the world, though you might not know that if you’re an American. Our great nation pays some pretty profound lip service to tolerance. John F. Kennedy was quoted as saying, “Tolerance implies no lack of commitment to one’s own beliefs. Rather, it condemns the oppression or persecution of others.” You could make the reasonable assumption that when Kennedy, a legendary enthusiast of boinking, spoke about tolerance, he echoed the larger beliefs of most Americans about sex, right? Um…no. For example, English author E. L. James released the novel Fifty Shades... Read More