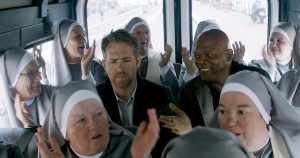 I know, I owe you an explanation.

A laundry movie is a film that you can see in the theater, though you probably shouldn’t. Instead, it’s a film that plays in the background while you’re folding laundry, making out, checking social media, or doing essentially anything else. You can check out for a while, but upon hearing a quip or an explosion, your attention can return to the screen and you can easily pick the thread of the story back up.

As long as there has been Hollywood, there have been laundry movies. Nobody means to make a laundry movie, it just kinda happens sometimes. It’s usually due to some critical detail in the film that’s undercooked, such as a weak script, a lethargic actor, or an inattentive director. Prior to home video and streaming, these movies were the Jan Brady of the cinema world, perpetually forgotten and sandwiched between cinematic titans and incompetent howlers.

If you’re on the road to becoming a serious movie nerd, you likely have a laundry movie you inexplicably love. One of mine is the remake of The Taking of Pelham 123, where schlubby Denzel Washington faces off against bat-poop crazy John Travolta. The flick ain’t good but despite its many flaws, I enjoy it. Someone out there will feel the same way about The Hitman’s Bodyguard, a sporadically entertaining late summer action flick.

We’re introduced to Michael Bryce (Ryan Reynolds), a formerly AAA-rated protection agent. Since he constantly tells people this, that factoid becomes tough to forget. After one of his clients inconveniently has his head blown off, Bryce is downgraded. Now, in an amusing scene involving a cameo by the always welcome Richard E. Grant, he’s protecting drug-addict lawyers and other bottom feeders.

Meanwhile, ace assassin Darius Kincaid (Samuel L. Jackson) is in the custody of Interpol. He’s agreed to testify in the International Court of Justice* in The Hague against the evil Dukhovich (Gary Oldman, looking sleepy), a Belorussian tyrant on trial for war crimes. In exchange for his testimony, Kincaid’s wife Sonia (Salma Hayek) will be released from prison. The agent in charge of transporting Kincaid to court is Amelia Roussel (Elodie Yung), and her job is to get Kincaid from Manchester, England to The Hague. While she’s perfectly competent, not even she can handle the legions of goons hired to rub out Kincaid and prevent him from testifying. Her team is wiped out, and she’s forced to hide out with the chatty killer.

Conveniently, Bryce is Roussel’s ex, and despite their acrimonious split, she reaches out to him for help. As so often happens, Bryce grudgingly agrees, drops everything, and travels to her. Shockingly, or perhaps not, we learn that Bryce and Kincaid have a history together of Kincaid attempting to murder people Bryce is trying to protect. Now, they must embark upon a road trip and try to keep from being killed and keep from killing each other. Like you do.

Perhaps the tone of my review is coming off unnecessarily snide, and you might be thinking I hated this movie. I didn’t, though a snide tone is kind of my default setting. The Hitman’s Bodyguard is perfectly adequate summer programming that’s designed to be watched in air-conditioned comfort. There are gunfights, car chases, lots of CGI blood splatters, quips, two-dimensional characters, a protagonist in need of “redemption,” and a plot that’s very simple. It’s a buddy movie, one where the two leads insult each other and you wish they would just cut to the chase and kiss already.

Director Patrick Hughes is best known, and I use that term loosely, for making The Expendables 3. He’s made a film that’s competent and shows occasional flashes of comic brilliance. But his control of tone is not so great, and it whipsaws between goofy comedy, action scenes that drag, and moments that are frankly too heavy. Does this film need scenes of ethnic cleansing and the wicked Gary Oldman executing a woman and child? Nope, because it develops a fun buzz from Jackson’s and Reynolds’ chemistry, kills the buzz with one of those unnecessarily heavy scenes, then has to take time building the buzz back up again.

While you’re watching the film, you might occasionally hear loud grunts, much like a weightlifter straining at the gym. That sound is the script struggling mightily to put the characters together in ways that seem to be organic. Screenwriter Tom O’Connor has written a script that lurches from scene to scene, and it’s missing the easy flow that you might see in one of Shane Black’s projects. Speaking of Black, the script doesn’t quite have its own voice, and it sometimes feels like a bargain basement version of The Nice Guys.

But what the hell, at least the cast is good. Nobody is reinventing the wheel here. Reynolds plays a put-upon wiseass, and while he doesn’t have quite the berserk energy here that he’s got playing Deadpool, Michael Bryce is comfortably in his wheelhouse. Jackson slings f-bombs here like he got them for three bucks off at Costco, but he’s willing to get silly, and that’s enormously appealing. Whether he’s merrily singing along with nuns or advising Reynolds about his love life, Jackson is loose and looks like he’s having a lot of fun. The film really works when it ignores the plot and the action, and just lets these two hang out and bounce off of each other.

The actor to really savor is Salma Hayek, though. She’s already given us one of the best performances of the year in Beatriz at Dinner. As Sonia, she’s hilariously profane, screaming obscenities at Interpol agents when they attempt to interrogate her. Her best scene, and the best scene in the movie, is where she beats the crap out of an entire Mexican bar to the tune of Lionel Ritchie’s “Hello.” On the other side of the spectrum is Gary Oldman, clearly not giving a damn. Want a good, recent Oldman performance? Check out his smart and nuanced role in Dawn of the Planet of the Apes.

While The Hitman’s Bodyguard is cheap-looking and ugly as hell in spots, it plays like gangbusters when it works. I can’t imagine any good reason to pay full price for this flick at the theaters. Honestly, I laughed fairly frequently, and I was moderately entertained. If only I’d had some socks to fold, the entire experience would have been perfect.

*We know this because of a sign on the building, as well as a graphic helpfully appearing in the very next scene.

Tim Brennan
Tim has been alarmingly enthusiastic about movies ever since childhood. He grew up in Boulder and, foolishly, left Colorado to study Communications in Washington State. Making matters worse, he moved to Connecticut after meeting his too-good-for-him wife. Drawn by the Rockies and a mild climate, he triumphantly returned and settled down back in Boulder County. He's written numerous screenplays, loves hiking, and embarrassed himself in front of Samuel L. Jackson. True story.
Tagged: elodie yunggary oldmanpatrick hughesryan reynoldssalma hayeksamuel l jacksonthe hitman's bodyguardtom o'connor