Home » Leaf of the Week » The Normalization of Cannabis Through Sports

The Normalization of Cannabis Through Sports 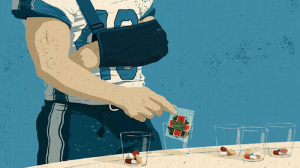 Last night, I had the pleasure of viewing Ricardo Baca’s screening of his new project, Subculture, at Denver’s SeriesFest. It was after the screening, during the audience Q&A, when I was inspired by some of the comments made my Baca and his team. Baca is a legend in the world of cannabis, but for anyone who might need context, some of his accomplishments include being the world’s very first marijuana editor, and spearheading the formation of The Cannabist, a division of the Denver Post. Fortune magazine ranked Baca as one of the seven most powerful people in American cannabis while the Brookings Institution said he’s one of 12 key people to watch in marijuana policy. Considered by Vice as “the nation’s most prestigious weed editor”, Baca is also the subject of the feature-length documentary Rolling Papers.

Although his accomplishments are enough to inspire us all within the cannabis community, especially hitting home with fellow cannabis journalists, what inspired me were the comments made about normalization. Baca’s new docu-series, Subculture, tells stories that illustrate the culture of substances globally. By taking it global, we will get to peer into other societies, who may have differing perspectives from our own, which give them their own definitions of what normal is. Cannabis is clearly becoming more normalized in America, and around the globe.

What all this has in common with the normalization of cannabis, is perspective. I, among many, truly believe the path to ending prohibition is being led by those crusading to change the public’s perspective of cannabis, and feel some of the strongest impact is being made by advocates involved with sports and athletics. As more and more people step out of the green closet, we’re starting to see a common pattern among professional athletes across all sports, and that is a favor of cannabis over prescription meds. It’s one thing for everyday gym goers, like my wife and myself, to start openly discussing how cannabis is part of our health and wellness routine, but when you have some of our nation’s greatest athletes advocating for cannabis to be removed from banned substance lists because they swear by the medicinal benefits, that’s a whole new ballgame.

The Super Bowl alone, just one athletic event out of the year, attracts the attention of more than 111 million people. Our nation puts professional athletes on such a high pedestal. It gives them an enormous platform to preach the gospel of cannabis as medicine, to a massive audience,  who are extremely receptive to their opinions regarding health, wellness, and athleticism. How many publications across all mediums of entertainment are focused primarily on the habits and routines of professional athletes? There seem to be endless cover pages and headlines letting us in on the secrets needed to train like our favorite athlete, how to look like, and how to eat like your favorite athlete, all told from their perspective, because they’re the experts.

Respecting expert opinions isn’t anything new for anyone, and athletes everywhere are still giving their expert advice, like they always have, except recommending cannabis as medicine is becoming the new normal. This normalization of cannabis through sports is making dramatic impacts on changing the public’s perspective, and it’s only beginning. As support grows, and more athletes start being honest about their cannabis use, a wave of normalization will rush across our country, gaining the momentum it needs to span the globe. This will ultimately bring the change we so desperately need, which is allowing everyone safe access to cannabis.

I’ve always felt this way, but only in the terms of knowing a shift in the public’s perspective is what is really needed, and sports is going to be a distinct leader in achieving that goal. This is why I support organizations like The 420 Games, and talk about How I Train, Make Gains, and go to Fitness Classes in Denver, all while Consuming Cannabis as an Athlete. So, when I heard Baca mention normalization, and he specifically talked about how we’re in the middle of the biggest drug reform we’ve seen in our lifetimes, I was reminded how important my own, and all of our efforts are, to participate in this part of our history. It is for these reasons, I encourage everyone to participate. The greatest thing is, participation is so easy! Some of the simplest ways to take part in this historic time of our lives is as easy as committing some of your follows, likes, and shares on social media to cannabis positive resources. Below you will find a list of a few cannabis, and athletic based figures, or resources I recommend you support, and I thank you for doing so. By doing so, you’re choosing to actively participate in making history that will improve the lives of million’s of people, all across the world.

These are just a few of the biggest names in cannabis, and CannaFitness, or cannabis and sports. I greatly thank you for your support. For more resources, hit me up in the comments below and I’ll be happy to send some your way. Until next week, be well friends.

Sponsored Content Disclaimer
This content has been published by OnDenver in conjunction with a local business, organization, or community member. This content may have been paid for, and also may include links not directly associated with OnDenver or its parent company, MetroSampler. We do our best to ensure that all content is consistent with our core beliefs and is safe/valuable for our audience. To inquire about sponsoring your own content, please email info@metrosampler.com.
Tagged: #420health#420wellness#Cannabis#makehistory#RicardoBaca#SeriesFest#stonedathlete#Subculture #sports #medicine #sportsmedicine #espn #sportsnews #athletes #history#thecannabist#thingstodoinboulder#thingstodoincolorado#thingstodoindenver420athlete420fitness420gamesboulderbuffstonerchangeColoradoDenverfitstonerhealthystonermakeadifferenceMarijuanamjfitnut