I showed up because I was promised snacks. My editor coaxed me to attend a benefit at the Ogden Theater this weekend with the promise of a pair of VIP packages. Each was supposed to include

I had no idea what a “Color Red Vinyl Package” was. I still don’t. I also didn’t see a single snack the whole time. 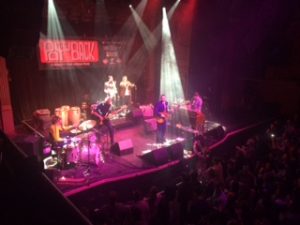 out past my coworkers. They all know about my *other* life, but for some reason it feels weird let them see me in that persona. Also, Vlad* in central processing does not need to see my ass in pleather tights. Shortly after my ass and I escaped the Soviet Stare, I found myself shivering alone in the aforementioned thrift store tights on a Colfax sidewalk in mid-December, because I’m a 30-something woman and this is my successful Millennial life. My friend Alison, who actually does have a non-ironically-successful Millennial life, was supposed to meet me there and use the other VIP pass, but she was late because she had to tag-team the baby-handoff with her husband. Alison is the friend I adore too much to admit that I hate her just a tiny, tiny bit. She’s petite and cute and happily married to a lawyer and has a Ph.D. and a loathsomely adorable toddler, none of which attributes apply to me. Also, 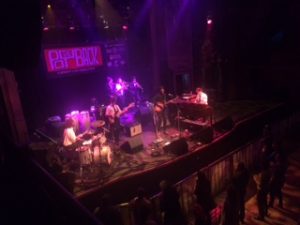 despite her recent pregnancy, her abs are way better than mine. We spend most of our time together venting pedestrian complaints about our respective partners and admiring pictures of the baby. It’s a damn cute baby. Sometimes we also go to see live music.

We made it through the metal detectors and bag-inspections (I’m sure the security people were delighted to paw through my backpack of dirty dishes from my brown-bag lunch) and asked about the VIP perks. We were pointed to a roped-off section of the balcony, which seemed to me to be exactly like the non-roped-off party, except that it had ropes. That’s what makes it VIP, I suppose? Anyway, I dosed myself with pharmaceutical courage in the form of two Dayquil gelcaps and washed them down with a drink-ticket gin-and-tonic, because I am a successful Millennial who also has a wicked head cold. 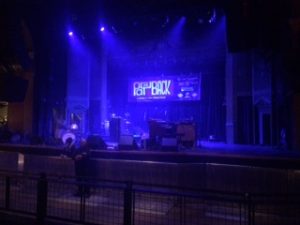 Last time I went to the Ogden Theatre was a couple years ago to see a metal band I had never heard of with a guy I wanted to sleep with. It’s a cool venue. A big, old opera house with a open floor and a steep balcony; bars on both levels have tubs of ear plugs, free for the asking if you smile nicely at the bartender. The ground floor this time had silent auctions set up with stuff to benefit the purpose of the evening, which was The Payback in general and Urban Peak in particular. The Payback is a program founded by the lead guy in the New MasterSounds, the group headlining the show. It benefits efforts to support and protect youth experiencing homelessness. This is an excellent cause, of course, and one that I support in particular. I’ve never been homeless, but there was a time in my life where I edged up to that cliff and stared down into its maw. I have a respected friend who used to be homeless. It’s only via my great luck in securing housing before Denver’s market boomed that I am able to live on my paycheck, as it is. I have deepest empathy for those whose luck has not been as good. If I can support efforts to such a cause while listening to some funky music, sign me up. Also, let’s talk about how badass Urban Peak is. It’s a non-profit that busts its 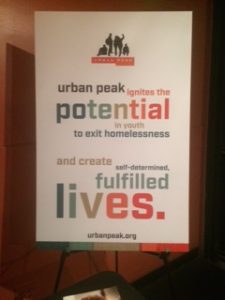 (bad)ass to serve and protect kids who need help to avoid or end the experience of homelessness. They have a drop-in center, an overnight shelter, education and employment training, health services, family mediation offerings, and a host of other critically important services that every single one of us humans needs and that adolescents at risk of homelessness have horrifyingly few other options to access. Let’s do better for our kids and support them and Urban Peak, too.

Now let’s get back to the funky music! And funky music it was! I’m happy to report that Alison and I fit right in with the crowd at The Payback, which is to say that we are demonstrably basic white chicks. White people seem to love funk music. I looked down on the hat hair and bald spots from the VIP balcony over a sea of definitely-not-people-of-color. Alison and I played “Who Would You Do” and discovered that we have very different preferences, which a nice non-compete clause to have in a friendship. The opening band, Shots Fired, made a valiant and pleasant effort. I definitely enjoyed their music and they seemed to be having a good time. The first rule of performance is “If the performers are having fun, the audience is having fun.” This was duly accomplished, along with some sweet footwear and a good bass groove. The vocals seemed not-quite-effortless at times, but the overall effect was positive.  The bit that stood out most for me (and you must remember that this recollection comes through a haze of gin and Dayquil) is that the keyboardist looks exactly like David Spade in a Tyra Banks wig. Joe Dirt, eat your heart out.

Funk music is all about the horns. I am not a musician, but as a person with a published writing outlet, I feel qualified to have this opinion. After Shots Fired left the stage and the New MasterSounds took over, the horns had their heyday. You could immediately feel the difference in the two bands. Shots Fired was definitely the newbie, the one still finding their sound and signature. The MasterSounds knew who they were from the first note. The sound was more complex, more interwoven, more confident in itself. The shiny blue 60’s suit handling the lead guitar carried us all out on a sweet funky line and kept right on going past the rafters. Even my non-musical self was soothed, entranced, and entertained by the integrated experience of watching confident performers and listening to their polished sounds. The lighting rigs on the ceiling swirled and danced along, as if they, too, were awkward white people, scattering light over their brethren.

What a great way to spend a December night. It was just cold enough outside to remind me that shelter and safety are so, so important to each of us, and that this group (and the audience gladly supporting them) were helping get that safety and shelter to our community’s kids. The music was joyful, the gin was strong. I must report, though, that there were absolutely no snacks.

Jessie Hanson
Jessie Hanson lives and works in Denver and couldn't be happier about it. Like the best-possible kind of Jekyl-and-Hyde scenario, she splits her life between science and storytelling. During the day, she performs clinical diagnostics and messes around with test tubes. At night, she performs behind the mic as a standup comedienne, in the air as a circus aerialist, and in rhinestones as burlesque dancer. She begrudges the hyper-inflated cost of a decent pair of false eyelashes. When she's not on stage, she sweating it out as an endurance athlete in triathlons and marathons across the West. She begrudges the hyper-inflated cost of a decent pair of running shoes. She's thrilled to be on board with OnDenver and writing about science, comedy, circus, athletics, and general fun on the Front Range!
Tagged: funkmusicOgden TheatreUrban Peak