The Name Is Lady. Cat Lady. 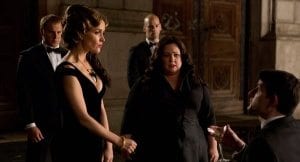 In 2008, Tom Farley Jr. and Tanner Colby’s excellent book The Chris Farley Show was released. Among other things, the biography of comedian Chris Farley explored Farley’s belief that, as a big guy, audiences only ever wanted to see “fatty fall down.” He felt that audiences would never accept him as anything but a lumbering, clumsy oaf.

As it is, the movie industry is like junior high-shallow, selfish and stupid. If you’re a person of size, Hollywood is a particularly cruel place. But when you factor in casual sexism, why then you’ve hit the misery trifecta! In most movies, a big woman is usually the best friend or sassy mentor. They have no interior life, no lust for life, no lust. They just exist to empower the slim leading lady and be utterly forgotten by the time the credits roll. They usually have a bunch of cats.

McCarthy is Susan Cooper, a CIA agent who’s been riding a desk since her training days. She handles tactical support for her mentor Fine (Jude Law), a dashing field agent. Sure, Fine shoots people in the face and beats the crap out of nameless thugs, but the voice in his earpiece is Susan, and she’s very good at her job. However, Susan also does her job thousands of miles away from the action in a dank basement office. She nurses an unrequited crush on Fine, and is starting to resign herself to a life of disappointment.

Things change when Fine is killed in the field by Rayna Boyanov (Rose Byrne), the daughter of an international terrorist. Rayna has gotten her hands on a nuke and is looking to sell it to the highest bidder. She’s also uncovered the identities of all of the CIA’s active field personnel. In order to avenge Fine and save the day, the CIA needs someone who can blend in and disappear. Turns out Susan is their best shot.

Based on that plot description, plus some pretty lousy marketing, you can be forgiven for thinking that Spy is about a loud, bungling idiot who accidentally triumphs. A movie where the fat lady is the butt of the joke. Hollywood thinks we want to see McCarthy is a goofy wig falling down. Thankfully, McCarthy and writer/director Paul Feig have given us something much smarter and much funnier.

It turns out that, during her training, Susan was an absolute badass. But Fine was her mentor and convinced her that she was better off supporting him. Deputy Director Crocker (Allison Janney) tells Susan that male agents used to do this kind of thing to their female trainees before she came along. When Susan protests and claims that the decision for her to stay out of the field was Fine’s and hers, Crocker sneeringly replies, “Women.”

It’s that scene, and others like it, that elevates Spy. Initially, Susan’s self-esteem is subterranean, and she’s convinced herself that things are as good as they’re going to get. But once she’s in the field, we see that Susan doesn’t miss much. Don’t get me wrong, the movie is funny as hell, and there’s several scenes of Susan experiencing…awkwardness growing into her new role. But Susan’s not only competent, she’s smarter than most of the people she’s dealing with. We see her quickly adapting to new situations, rapidly assuming new identities, and it turns out she’s a pretty damn good field agent.

Though McCarthy is not the only source of laughs, and her own movie is nearly stolen out from under her by Jason Statham. As rogue agent Rick Ford, Statham plays a ridiculously inflated version of his usual screen persona. He’s always had a way with comedy, but Statham has been dwelling in the land of B-movie action for so long, that I’d forgotten how good he can be. The same can be said for Rose Byrne’s Rayna. She’s a fine antagonist for McCarthy, and some of the best pleasures to be had are watching the two of them snarl at each other.

Feig and McCarthy seem to be developing a long-running film partnership along the same lines of Scorsese and DeNiro or Burton and Depp. Hollywood has long been a wasteland when it comes to good roles for women, and thankfully Feig has transformed himself into a cottage industry regarding creating solid roles for women in general, and McCarthy in particular. It’s pretty great to see a film that can not only knowingly comment on spy movie tropes, but also tweak the perception of how certain women should be portrayed in movies.

Spy runs maybe a little longer than it should, but it’s 2015 second great spy movie parody.** It’s got excellent action, some truly surreal moments (a bat infestation in Susan’s CIA office), smart comedy, and impressive profanity. Check it out, you’ll love it. Just do yourself a favor and avoid the marketing.

*Paul Feig’s screenplay was originally titled Susan Cooper, but the title was apparently changed per the suggestions of the 20th Century Fox marketing department. Things like this remind me of Bill Hicks, when he said, “If you’re in marketing or advertising…kill yourself.”

**Kingsman: The Secret Service being the first. These two movies would make for a damn good double feature.

Tim Brennan
Tim has been alarmingly enthusiastic about movies ever since childhood. He grew up in Boulder and, foolishly, left Colorado to study Communications in Washington State. Making matters worse, he moved to Connecticut after meeting his too-good-for-him wife. Drawn by the Rockies and a mild climate, he triumphantly returned and settled down back in Boulder County. He's written numerous screenplays, loves hiking, and embarrassed himself in front of Samuel L. Jackson. True story.
Tagged: jason stathamjude lawmelissa mccarthypaul feigrose byrnespy