The Draft Was Going Perfect – Until We Ran Out of Lock

When the Oakland Raiders decided to take a lower-graded defensive end with the fourth overall pick and the New York Giants surprised everyone by taking quarterback Daniel Jones at number six, John Elway’s draft board couldn’t have looked any better.

Sitting at number ten, Elway could have chosen Devin Bush, an inside linebacker from Michigan, selected a top offensive lineman, or had his choice of any quarterback he wanted, but he didn’t.  Instead, Elway wisely traded the pick to the Pittsburgh Steelers, deciding to acquire more picks and more value to fill some glaring needs.

The Broncos haven’t had a quality tight end in years, the offensive line has struggled, no one can cover a tight end, and we’re still not sure we have a quarterback.  Elway had plenty to work on.

Passing on a player at number ten is one thing.  The question is whether Elway’s draft class made the grade. 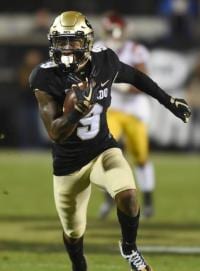 pick and love Risner.  But I can’t get over Drew Lock at 42.  With teams like Washington, Miami, the Giants, and Arizona selecting QBs, only Tampa Bay, Cincinnati, and maybe the Raiders will still be looking when next year’s draft comes around.  With Justin Herbert (Oregon), Jake Fromme (Georgia), and Tua Tagovailova (Alabama) coming out in 2020, has Denver already committed to the future with Lock?

Alan Tapley
Alan Tapley is an educator, author, and blogger who has lived just outside of Boulder for the last twenty years.  His published work includes two novels, two children’s books, a series of cartoons in the Minneapolis Star-Tribune, and multiple sports related articles. His love for family and the state of Colorado is only matched by one thing, his passion for sports.  The first baseball game he ever attended was at Wrigley Field, before there were lights.  At the final Bronco game at the old Mile High, he allegedly cut out a piece of his seat in the South stands.  But regardless of being here for the Avalanche’s last Stanley Cup, the Rockies only World Series appearance, and all the Broncos’ Super Bowl Victories, his wife never fails to remind him that he wasn’t at the University of Colorado in 1990, like she was.  The year the Buffs football team won the National Championship.
Tagged: Dalton RisnerDenver BroncosDre'mont JonesDrew LockJohn ElwayJustin HollinsJuwan WinfreeNFL DraftNoah Fant