The Draft Was Going Perfect – Until We Ran Out of Lock 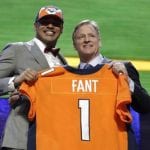 When the Oakland Raiders decided to take a lower-graded defensive end with the fourth overall pick and the New York Giants surprised everyone by taking quarterback Daniel Jones at number six, John Elway’s draft board couldn’t have looked any better. Sitting at number ten, Elway could have chosen Devin Bush, an inside linebacker from Michigan, selected a top offensive lineman, or had his choice of any quarterback he wanted, but he didn’t.  Instead, Elway wisely traded the pick to the Pittsburgh Steelers, deciding to acquire more picks and more value to fill some glaring needs. The Broncos... Read More