The Apple Of His Eye 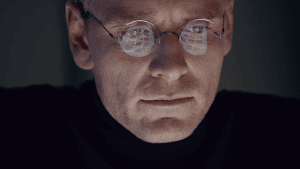 As I sit here writing this review, my iPhone rests on the desk next to me. It’s become a nearly indispensable feature of my life. I can view my hilariously low bank balance, check the weather, and catch up with friends living on the other side of the continent. I have access to a mind-boggling amount of information, and my iPhone has more computing power than Apollo 13. When I hold it in my hands, it feels comfortable, it feels right. I’m not necessarily sure that’s a good thing.

My life was utterly changed by Steve Jobs. So was everybody else’s. The invention of the printing press and the subsequent printing of the Gutenberg bible was one of those moments that literally changed the course of human history. It can be argued that the creation of the personal computer is another moment, only we’re living through it and only beginning to understand what it all means.

Jobs was the co-founder of Apple, helped to develop the Macintosh computer, the iMac, the iPod and iPhone, and funded the creation of Pixar Studios. That’s just a few of the highlights. He was well-known for his high intelligence, fanatical attention to detail, and his even more fanatical need for control. Everybody’s got an opinion about Jobs. Some of us think he was one of humanity’s greatest innovators. Others opine that he stole the majority of his designs and just made the end results sexier. He was large, he contained multitudes.

In 2013, Ashton Kutcher played Jobs in the independent film Jobs. Despite being a modest success, the film is not well-remembered. The second major feature film about the Apple co-founder, Steve Jobs, is in theaters now. It’s a vastly superior film, not only because of a far better class of actors and filmmakers,* but primarily because the ambition of this film is incredible.

Steve Jobs is not structured like your typical biopic, where we might see baby Steve point excitedly at a hulking computer and nod knowingly to ourselves about what the future holds. Ingeniously, the film focuses on three separate product launches during Jobs’ career. The first is the unveiling of the Apple Macintosh in 1984. Jobs (Michael Fassbender) deals with last-minute glitches, such as the inability of the computer’s voice demo to say, “Hello.” He threatens engineer Andy Hertzfeld (Michael Stuhlbarg) with public humiliation if he can’t repair the demo, while his marketing executive and right-hand woman Joanna Hoffman (Kate Winslet) desperately tries to keep everything on track. In the midst of this chaos, Jobs’ ex-girlfriend Chrisann (Katherine Waterston) arrives with his daughter. She’s a wee bit bitter since Jobs has denied his paternity and has refused to help support them despite his massive wealth. Apple CEO John Sculley (Jeff Daniels) also arrives for a pep talk, and Apple co-founder Steve Wozniak (Seth Rogen) begs Jobs to acknowledge the contributions of the Apple II team, the predecessor of the Macintosh.

We bounce a few years into 1988 and the launch of the NeXT computer launch, a console that’s designed to be a nearly perfect cube, but that isn’t functional per se. Jobs is older and richer, but still a borderline sociopath. From there, we rocket to 1998 and the premiere of the iMac. Jobs is now in his trademark dad jeans and black turtleneck, and while the technology changes, the people, relationships, and conflicts stubbornly stay the same.

Take a moment and look at the filmography of director Danny Boyle. He’s done horror with 28 Days Later, the horrors of heroin with Trainspotting, and the struggle for survival with 127 Hours. That’s just a few of his films, and he’s a filmmaker of propulsive energy. Steve Jobs is no different, but here we’re riding a tsunami of language. Like The West Wing in its prime, characters speed-walk in and out of rooms, barrel through corridors, and they constantly talk. There’s a jangly energy surrounding the scenes, a feeling of near chaos, but Boyle knows what he’s doing. He’s got total mastery of the energy and tone of the film, and he always knows when to race ahead or when to take a brief moment of quiet.

Speaking of the dearly departed West Wing, the screenplay is by Aaron Sorkin.** If the name doesn’t ring a bell to you, he’s known for hyper-verbose characters that are supremely witty, but they’re constantly in motion, always walking and talking. One of the brilliant aspects of Sorkin’s script is that he recognizes how certain people and themes continue to come around in our lives, and how we’re doomed to repeat them unless our behavior is altered.

The cast is perfect, with each of the actors inhabiting their characters instead of doing a cheap imitation. Seth Rogen does great work as Wozniak, and he plays a decent and warm man butting up against the prickly Jobs. He gets the best line of the film, saying to Jobs, “You can be decent and gifted at the same time. It’s not binary.” As usual, Kate Winslet  is excellent, and her Hoffman is the only one who doesn’t back down from Jobs condescension. Her chemistry with Fassbender is electric, almost palpable. I loved it.

Let’s get one thing out of the way. Yes, Fassbender looks nothing like the real Steve Jobs. But that doesn’t matter. He’s doing a high-wire act of a performance, spitting out dense dialogue and making it sound natural. He’s charismatic, commanding and almost totally unlikeable,*** but always fascinating. He brings to life a man of towering intelligence and an unerring sense of design. Jobs understood things, understood how they should make you feel, and he was able to mold them as such. He just couldn’t control people the same way, and Fassbender’s exasperation towards people behaving like unpredictable individuals is marvelous.

Steve Jobs focuses on a man obsessed with the concept of innovation. The greatest innovation of all is that this film never glosses over his flaws, but lays them bare. The real Steve Jobs didn’t care if people liked him or not, and this film is just as uncompromising towards its subject.

**This film is a spiritual sequel to The Social Network, the biopic about Facebook founder Mark Zuckerberg. Sorkin wrote that screenplay as well, and the film is an absolute masterpiece.

***Many screenwriting books teach that protagonists need to be likable. They are wrong. Protagonists just need to be interesting.

Tim Brennan
Tim has been alarmingly enthusiastic about movies ever since childhood. He grew up in Boulder and, foolishly, left Colorado to study Communications in Washington State. Making matters worse, he moved to Connecticut after meeting his too-good-for-him wife. Drawn by the Rockies and a mild climate, he triumphantly returned and settled down back in Boulder County. He's written numerous screenplays, loves hiking, and embarrassed himself in front of Samuel L. Jackson. True story.
Tagged: aaron sorkindanny boylejeff danielskate winsletkatherine waterstonmichael fassbendermichael stuhlbargseth rogensteve jobs