The Algiers Lives On 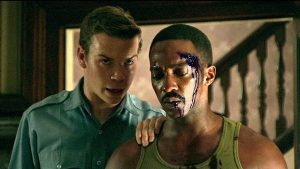 I’m a father to a ten-year-old boy. Part of my job is to teach him to be a decent human being, to be kind to others, help whenever possible, and try to make things suck just a little bit less. I’m also white. My wife is white, so that makes our kid white. That whiteness gives us advantages, ones that we often take for granted but are nevertheless enormous.

Here’s an example. Last weekend, my wife got busted for speeding. Was she really speeding, or was she targeted due to her race or gender? Oh, I guarantee she was legitimately speeding. She told me later that the entire interaction she experienced with the police officer was uneventful. At no point was she worried about it being a trumped-up charge. At no point was she worried about the officer pulling his sidearm and shooting her. It was all just a merited pain in the ass, nothing more, and that’s because she’s white.

Philando Castile had a very different experience with law enforcement. On July 6, 2016, he was pulled over by police in Falcon Heights, Minnesota. Why? Police thought he was a suspect in a robbery, despite the fact that he wasn’t. Officer Jeronimo Yanez approached the car, and Castile calmly informed him that he had a legally registered firearm in his possession.* As far as I can tell, Yanez panicked, pulled out his firearm, and shot at Castile seven times. He died in the car, next to his girlfriend. His four-year-old daughter was in the back seat. What was Castile’s crime, his real crime? Driving while black.

Castile joins Tamir Rice, Jamar Clark, Alton Sterling, and literally thousands of other people in an American club. To join that club, you need to be non-white, targeted and killed by police for no good reason, and watch from the Great Beyond as your killer walks. That should piss you off. That pisses me off. It pissed off Kathryn Bigelow, one of our most talented filmmakers. She took that rage and sense of injustice and made Detroit, a film that’s unfocused and shaggy, but also necessary.

Based on real events, it all starts on July 23, 1967. Detroit police, which was 93% white, raid a “blind pig,” an unlicensed and all black social club. The patrons committed the crime of having a few drinks and celebrating the safe return of local soldiers from the battlefields of Vietnam. That was apparently a bridge too far, and the cops hauled off everybody to jail. After years, decades, centuries of institutional abuse, enough was enough. Widespread rioting broke out. Homes and businesses were torched. The Army and the National Guard patrolled the streets. When it was all said and done, 7,000 people were arrested. 43 people were dead and, unsurprisingly, most of them were black.

During the chaos, we meet Larry (Algee Smith), the lead singer of music group The Dramatics. They’re good, and they’re right on the cusp of breaking out by performing in front of a huge crowd after Martha Reeves and the Vandellas.** Their chance evaporates as the theater is evacuated during the riots, and there’s a heartbreaking sequence where Larry stands on the stage of the empty theater and sings. Along with his buddy Fred (Jacob Latimore), they head to the Algiers Motel, a black-owned business. Their plan is to ride out the chaos of the rioting in friendlier environs.

They aren’t the only ones. Army Airborne veteran Greene (Anthony Mackie) is there. He’s left Vietnam, a country actively trying to kill him, returned to a country that doesn’t want him, and simply wants to decompress. Karen (Kaitlyn Dever) and Julie (Hannah Murray) are there, two white girls fresh off the bus from Ohio and looking to get a feel of the big bad city. Carl (Jason Mitchell) is there, fooling around with a harmless starter pistol. As a joke, he fires blanks in the direction of a unit of National Guardsmen.

As you can imagine, this is a bad move, and it triggers a lengthy siege. The worst of it is the arrival of Krauss (Will Poulter) a police officer who has already shot a fleeing looter in the back earlier in the day and might be up on murder charges. While his fellow officers Flynn (Ben O’Toole) and Demens (Jack Reynor) are your standard issue racist cops, Krauss seems more to be an agent of chaos, ratcheting up tension whenever possible. The three cops roust the inhabitants of the Algiers and humiliate, torture, and flat-out kill some of them. Security guard Dismukes (John Boyega) is a levelheaded guy who tries to defuse the tension. He’s a good man placed in an impossible situation.

Detroit is essential viewing. It’s not a great film, though it’s not for lack of trying. Director Kathryn Bigelow has caught heat in the past from military veterans about the accuracy of The Hurt Locker, as well as her portrayal of torture in Zero Dark Thirty. Those are valid criticisms, but it doesn’t change the fact that she’s not just a great filmmaker, but one of the great filmmakers. Bigelow specializes in the examination of people under pressure and how they respond to it. Hoo-boy, does she do that here. The extended sequence set in and around the Algiers is absolutely excruciating. Mock executions take place, and verbal and physical abuse becomes nearly routine. I’m paraphrasing, but one of the characters mentions that being black is like having a gun pointed at your face every single day. Bigelow does masterful work showing a white guy like me the small humiliations and large horrors people of color deal with on a regular basis. That’s valuable.

So does this mean the film is a racism simulator, a way for white people to get a tiny understanding of how discrimination feels? I don’t think so, and that’s what I’m struggling with. Why did Bigelow make this film? Fury over institutional racism? Rage over the sad fact that from 1967 to 2017, virtually nothing has changed in terms of the ways people are brutalized by law enforcement? I’m not sure, and I think part of the problem is Mark Boal’s script. Like Zero Dark Thirty, Detroit is meant to be a sprawling examination of the 12th Street Riot and the various perspectives that collided in the Algiers. But while the War on Terror is examined on numerous levels, Zero Dark Thirty uses its main character, Maya, as a continuous focal point. We see her reaction to torture, to boots on the ground operatives and far off bureaucrats. Here, we don’t have that, and the film can never quite narrow its focus. An additional issue is the script’s portrayal of the corrupt officer Krauss. He’s shown to be pure evil, never conflicted about what he’s doing or reflecting upon why he’s doing it. If you push this character just a tiny bit further and throw on some clown makeup, you’ve got The Joker. The character of Krauss is one that needs nuance.

As messy as the script is, the cast does fine work. As usual, Anthony Mackie is magnetic in a role that’s smaller than I would have liked. I think most people will identify most with John Boyega’s Melvin Dismukes. Boyega is a smart performer, and you can see the wheels turning in his head as he sizes up the situation and tries to approach it with the goal of de-escalation. For me, I was drawn to Algee Smith’s Larry. He’s not trying to be a hero. He just wants to sing, make it in the entertainment business, and maybe meet some pretty young ladies along the way. Smith gives Larry a palpable love for life, then shows us what happens when that love collides with brutal reality.

Is Detroit one of the best films of the year? I don’t think so, but it does matter. The rage pulsing throughout this movie is one that can spark conversation, engage brain synapses, even cause change. The question is, how much do we want to change, and how many more Algiers will we endure?

*This is the sort of incident that the National Rifle Association claims to be against, yet did absolutely nothing to protest. I promise you that if Philando Castile had been white and been named Philip Castor, the NRA would have come down on the police like a ton of bricks.

**Note to filmmakers: As much as I love Nowhere to Run, Martha Reeves and the Vandellas actually made other songs. Can we maybe stop using just the one song all the time, guys?

Tim Brennan
Tim has been alarmingly enthusiastic about movies ever since childhood. He grew up in Boulder and, foolishly, left Colorado to study Communications in Washington State. Making matters worse, he moved to Connecticut after meeting his too-good-for-him wife. Drawn by the Rockies and a mild climate, he triumphantly returned and settled down back in Boulder County. He's written numerous screenplays, loves hiking, and embarrassed himself in front of Samuel L. Jackson. True story.
Tagged: algee smithanthony mackiedetroithannah murrayjacob latimorejohn boyegakaitlyn deverkathryn bigelowmark boalwill poulter