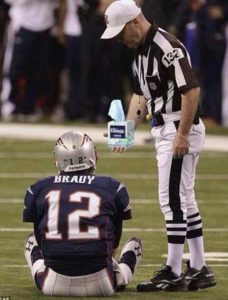 Any hope of salvaging the Broncos season was erased within the first few minutes late Sunday night at Mile High. Denver rookie Isaiah McKenzie turned the ball over after failing to field a punt in what would end up being an atrocious night for the entire special teams unit. Tom Brady stepped on the field moments after to seal our fate. A lost game and a lost season is bad enough, but losing to New England and Tom Brady just compounds the pain. Here are ten reasons we hate Tom Brady.

1) Looks – With his perfect hair, white teeth, and chiseled face, Brady reminds us of every frat boy that ever annoyed us, or the preppy, yacht club member that plays fiancé number one in every romantic comedy before the girl comes to her senses.

2) Guilt by association – It is very hard to separate Brady from the people he surrounds himself with. His team, and their questionable ethics and droll coach. His obnoxious tight end who loves to take his shirt off. His offensive coordinator, a Denver fan-favorite, who receives credit every time Brady brushes his teeth. Not to mention the subdued and polite fans of the Boston/New England area.

3) False hope – Chosen in the sixth round back in 2000, Brady showed that you don’t need to be a great athlete or a first-round pick to make it as an NFL quarterback. With hard work and determination, any Big Ten, cerebral, late-round pick can become a star. Right, Trevor Siemian?

4) The whining – Is it more bothersome that Brady complains to the officials after every play, or that his team is up 35-10 in the fourth quarter and he’s still throwing on first down as he’s doing it?

5) Luck– The Super Bowl victory over Atlanta last year, Seattle decides to throw the ball from the goal line a few Super Bowls earlier, the Tuck Rule game versus the Raiders in 2001? What’s next? Is a Brazilian Supermodel going to show up at his doorstep?

8) Comebacks – Brady has 40 fourth quarter comebacks in his career. David versus Goliath is only a good story because we cheer for the underdog to come back. Goliath at a press conference wearing a cardigan doesn’t quite have the same feel.

9) Gisele – I was disrespected at the draft, the League is out to get me, and I went a whole year once without going to the Super Bowl. I sure wish I had a Brazilian, Victoria’s Secret, Supermodel shoulder to cry on.

10) Arrogance – It’s not about stats Tom. Just because you’re in the top five in every statistical category, including first in wins, doesn’t make you the best. It’s about championships. Okay, sure you have five of those, but how did you play? Right. Four Super Bowl MVPs. Fine. But you can’t dance. And we hate you.

Alan Tapley
Alan Tapley is an educator, author, and blogger who has lived just outside of Boulder for the last twenty years.  His published work includes two novels, two children’s books, a series of cartoons in the Minneapolis Star-Tribune, and multiple sports related articles. His love for family and the state of Colorado is only matched by one thing, his passion for sports.  The first baseball game he ever attended was at Wrigley Field, before there were lights.  At the final Bronco game at the old Mile High, he allegedly cut out a piece of his seat in the South stands.  But regardless of being here for the Avalanche’s last Stanley Cup, the Rockies only World Series appearance, and all the Broncos’ Super Bowl Victories, his wife never fails to remind him that he wasn’t at the University of Colorado in 1990, like she was.  The year the Buffs football team won the National Championship.
Tagged: Bill BelichickDenver BroncosGiseleIsaiah McKenzieNew England PatriotsNFLpeyton manningRob GronkowskiTom BradyTrevor Siemian